We chose our first visit to be in the small town of Mitchell.  We chose Mitchell over Sioux Falls because Mitchell is the home of the "World's Only Corn Palace".   That sounded way to intriguing not to check out!  After all, we'd seen waterfalls before...we'd never seen a "corn palace"!  We parked the rig, settled in, and took off to check this thing out...

Well, we weren't disappointed!  No false advertising here.  Now, as stated in their brochure (which we had picked up at the South Dakota Welcome Center) they were still working on it, and would be for another month.  Which, was cool, because it gave you an better idea on how it's done (they call it "corn by numbers").  They also show you a video on how they do it as well.  They change the theme every year, sporting a new one each time.  600,000 pieces of corn are used to decorate the outside along with 3,000 bushels of grains and grasses: milo, rye and sour dock.  They have 9 different colors of Indian corn that they use to create the mural pictures.  It's grown locally and has to be separated by a mile so that it doesn't cross pollinate.   Over a ton of nails, staples, and wire are used to fasten the corn and grasses.  They spend approximately $100,000 each year for the redecorating and don't charge any admission for us to come and view it, take the tour, see the museum and "oh & ah".  ;-)  They do have special concerts and programs that they do charge for tho.  They have been doing this since 1892...can you believe it? 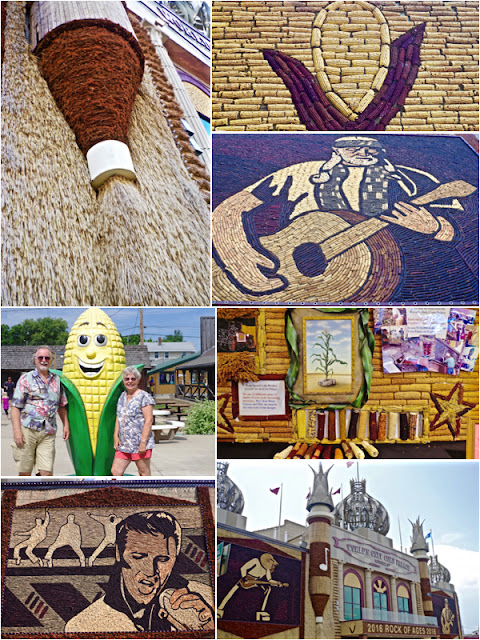 At one time there were 34 palaces in 24 towns across the Midwest.  All are gone now, except for this one in Mitchell.  It's huge, and it's beautiful and it's truly a work of art.  I had heard of it and thought it was something "corny" (no pun intended),  that it would be just a bunch of corn stalks stapled together somehow.  I never expected it to be a true work of art.  In many ways it reminded me of the beauty that goes into the floats at the Rose Parade, only on a much grander scale.  I was so glad we came.

Our next stop was a brief one in another small town, called DeSmet.  If you grew up reading the books of Little House on the Prairie by Laura Ingalls Wilder you might recognize that name.  This is where her "Pa" began his homestead and where "half pint", as she was called, came to live from the age of 12.

The town is pretty much "all about Laura Ingalls Wilder", from the Ingalls Homestead to their home, to the cemetery.  We spent a lovely afternoon out at the homestead touring the various building and watching the demonstrations, taking a wagon ride out to the school house and viewing the acres of land.  It was a tough life that they lived, plowing hard dirt by hand, walking miles to school through all kinds of weather, enduring much to gain a title to this piece of Dakota prairie. 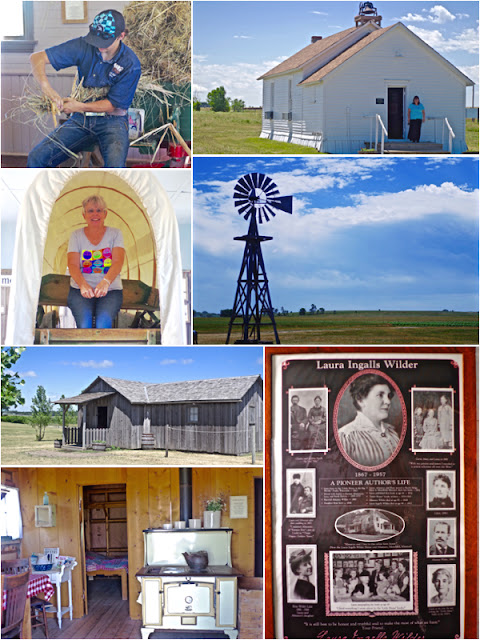 I was surprised to learn that Ms Wilder didn't even start writing until she was in her mid 60's, and at the encouragement of her daughter Rose.  Laura was the only one to have any children, and Rose was the only one that lived, so when she died in 1968, she was the last of the Ingalls/Wilder family.  She too was a writer.

The rest of our drive was pretty much long stretches of "amber waves of grain" as the song goes, and fields & fields of corn until our last camp stop before we left the state, at Lake Kampeska.  A lovely site, very peaceful.  We were only there a couple of night, but had a site that faced a second one and met two delightful ladies who were "locals" just enjoying a couple of days off from work.  We had a wonderful chat, sharing a bit of our travels & experiences with them.  Sara had just purchased her Class C and was looking forward to getting out more and going "further" with it than she had with her previous RV.  Always fun to encourage folks to get out there and enjoy this wonderful country of ours! 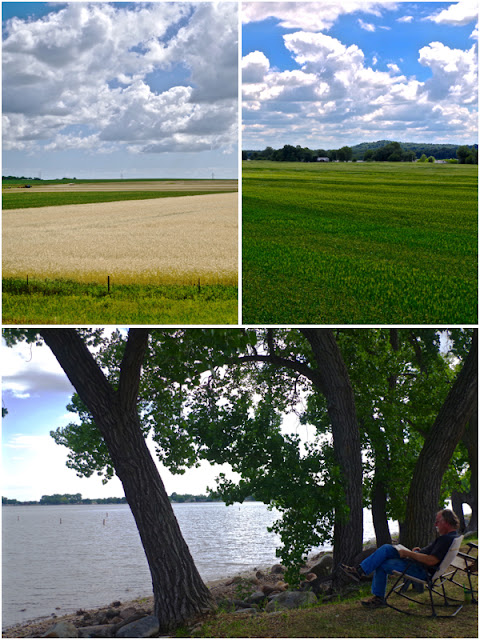 ...on the road to North Dakota,  Marie