Our 20th Wedding Anniversary was fast approaching, so it was time Jack and I make plans on where to spend it!  We had talked about it on and off over the months but not knowing what part of the country we were going to be in at the time, we hadn't made any plans.  Now that we were in Montana, and September 1st (and being Labor Day weekend) only weeks away, we needed to get serious about it.

The Grand Teton National Park in Wyoming seemed like "the perfect choice".  It has always been at the top 5 on the list of our most favorite places we've visited.  Quickly checking with the National Park, I found out we could only get 5 days at the RV Campground in Colter Bay.  We decided we would stay a week in Cody beforehand, then go into the Park for the 5 days and stay the 1 special night, our anniversary night, at the Jackson Lodge itself (big splurge).

Three years ago we had spent just a couple of days in Cody visiting their wonderful  Buffalo Bill Center of the West museum, walking through the town, and enjoying the sights and sounds of their annual Plains Indian Museum Powwow, that was taking place.  We just weren't there long enough to really take advantage of all that Cody had to offer and just knew that it was a great little town that we would love to come back to again.

Now was our chance!  So nice to be able to settle in, relax and take in the sights.  One of the first things we did was take the Cody Trolley Tour!  We have learned that this is such a fun way to get to know a town, all the "little known facts" that one doesn't learn on their own!  Well, there's not a whole lot to Cody, but the two guides made it a whole lot of fun!  They took us all around the small town and out to the Dam.  We even caught a few deer grazing on some apples along the way!  They filled us in on all the history (much of it we already knew) but it was fun to hear their stories, especially about the burial of disputes of poor Buffalo Bill Cody (seems he died in Denver at his sister's, so he's buried there instead of here in Cody, much to the chagrin of the town he created). 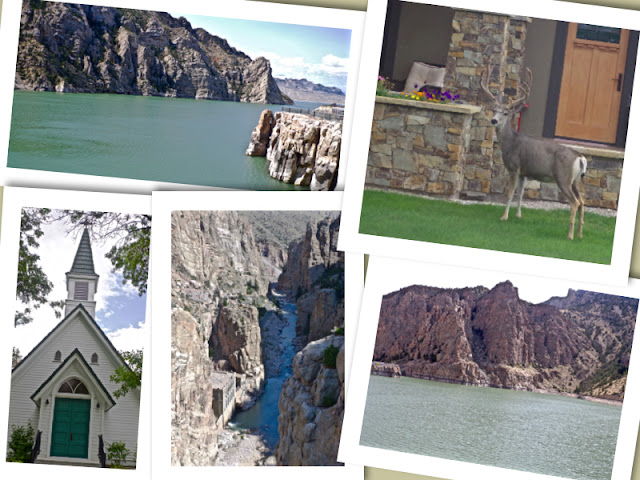 The Buffalo Bill Dam was quite an engineering marvel, built from 1892-1906, it was the world's tallest Dam at the time.  The thing that I marveled at was that it could only be worked on during the winter!  This was because during the rest of the year the water was so high that it would pour over the area they were trying to dam up!  Those poor men would be working in below freezing conditions, digging, pouring cement, etc. under ungodly conditions!  Amazing...and it's not only still standing today, it's a thing of beauty!

After that, we spent a wonderful afternoon at the Old Trail Town.  What a unique and unusual place.  A gentleman by the name of Bob Edgar and some friends have collected authentic historic structures and furnishings from remote areas of Wyoming and Montana and reassembled them here where Buffalo Bill Cody first started the town of Cody...and what a great job they have done too!  They have located and brought back the cabins of Butch Cassidy and the Sundance Kid, a Wyoming saloon frequented by Cassidy's "hole-in-the-Wall Gang", along with cabins from such scouts like "Curley", a Crow Indian army scout who helped Col. George Custer.  A small cemetery is there as well, holding some "interesting" folks, one being the infamous Jeremiah Johnson who was portrayed by  Robert Redford back in 1972.  He even came here to be a pall-barer when they brought Johnson's body for the re-burial! 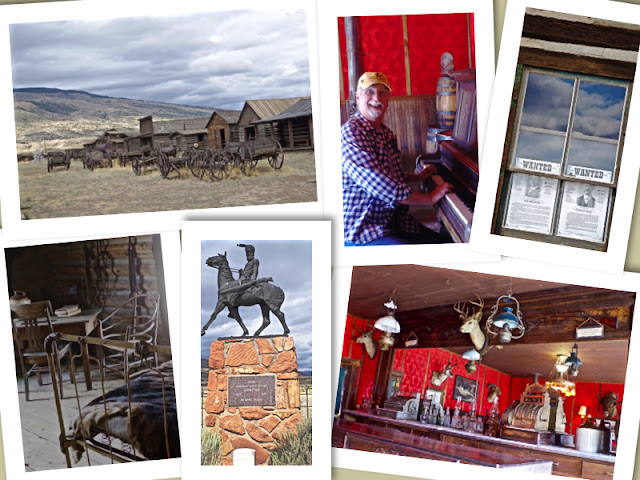 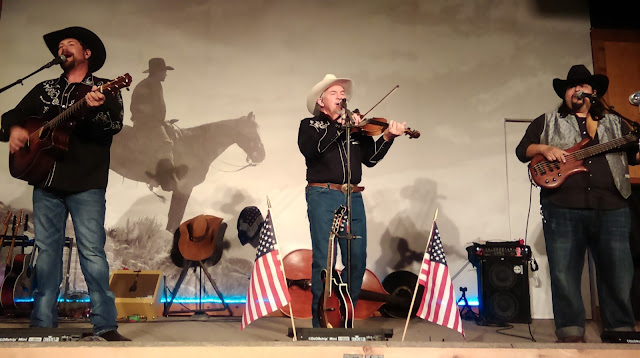 On our final night in Cody we spent at the Cody Cattle Company Dinner Show.  What a fun night of good food and entertainment!  Three guys sang and played foots stomping music for a couple of wonderful hours while we ate till out tummies were about to bust!  It sure was a great way to end our stay in Cody!


Because of the fires in Yellowstone, we had a very  l o n g  drive to the Tetons the next day.  Ugh.  But...we made it with smiles on!  The sun was shining and our campsite was lovely!  Nothing like the smell of pine trees to cheer one up!  mm mm 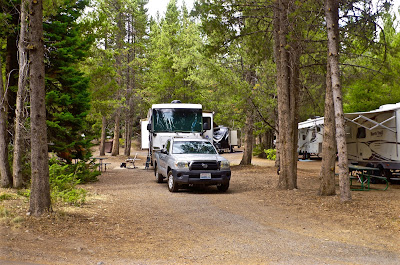 Since we'd been to the Park before, we weren't here to "run around and see everything", We were really here to just sit back and enjoy the calmness of the Park, which is what we really did.  It's a good thing too...as we, or I should say I, really, hadn't given much thought to the fact that when we were here last, it had been the first week of June when everything was still in bloom and the snow was still on the mountains.  Not so at the end of summer.  It never occurred to me how dry everything was going to be...silly me!  Sure looks different in late summer!  When we were here 3 years ago we saw tons of animals, this time, one lone elk!  But in all fairness, we didn't go looking this time either.  It still gave us great sunsets tho!  ;-) 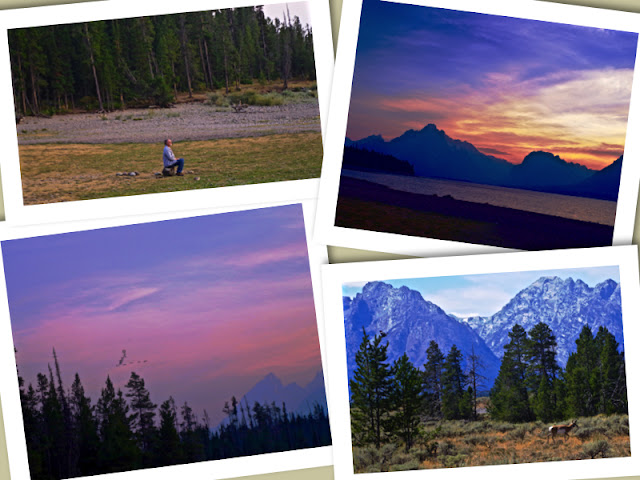 The one thing we did do this time, other than sit by the lake and read, is take the Jackson Lake cruise.  We had a nice tour guide, a young college student here for the summer from Grand Rapids MI, who was quite knowledgeable and entertaining.  As I said, the snow level was down, as well as the water level, but we did see a couple of young bald eagles and an osprey nest. 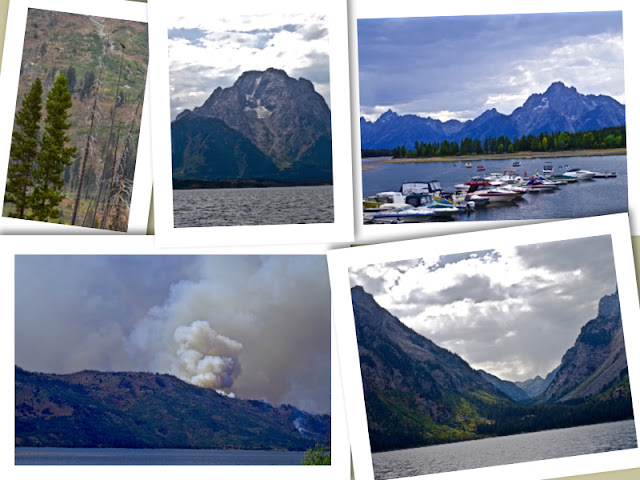 Our last night was spent in the beautiful Jackson Lake Lodge, a splurge for us, but hey, once every 20 years, so OK!  ;-)  A special lovely dinner in the Mural Room, a toast to us and our life together...ever onward my love! 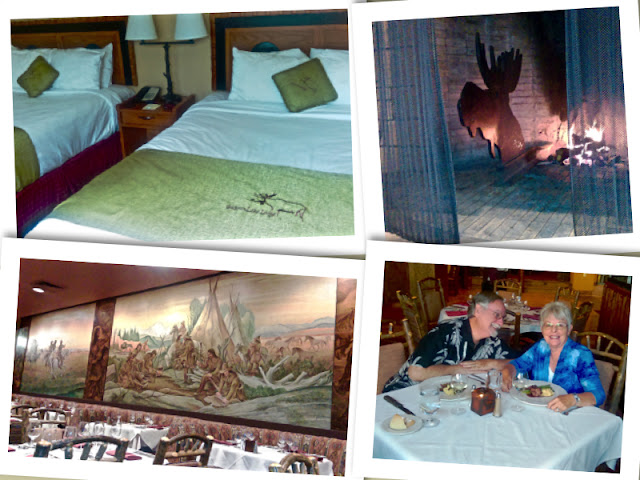