A Salute to the Future and a Peek at the Past...

Our last day spent with our friends we started our day off visiting the  United States Air Force Academy in Colorado Springs.  What a beautiful campus, set in a gorgeous location!  The first thing you see as you drive along the freeway to get to it, is their very large Falcon Stadium, with it's back against the large rocky mountains that Colorado is so famous for.  Impressive. 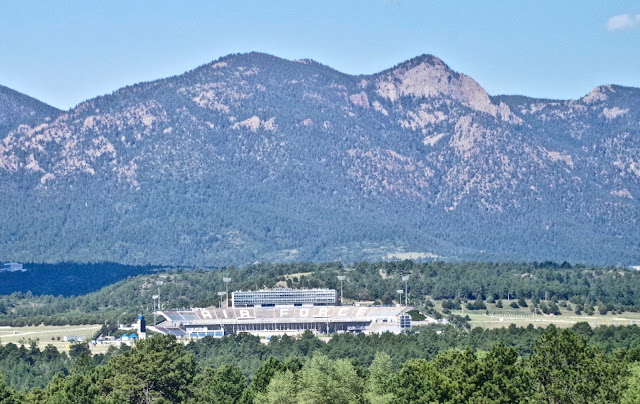 Once inside the Visitor Center, you are welcomed with a large mural showing cadets throwing their hats in the air in celebration of graduation, a bronze plaque blazoned with their motto "We will not lie, steal, or cheat, nor tolerate among us anyone who does".  They show a great film about the life and training of a cadet, and have exhibits displaying the history, uniforms, a model of a cadet's room, etc.  Then, of course a very large gift shop! 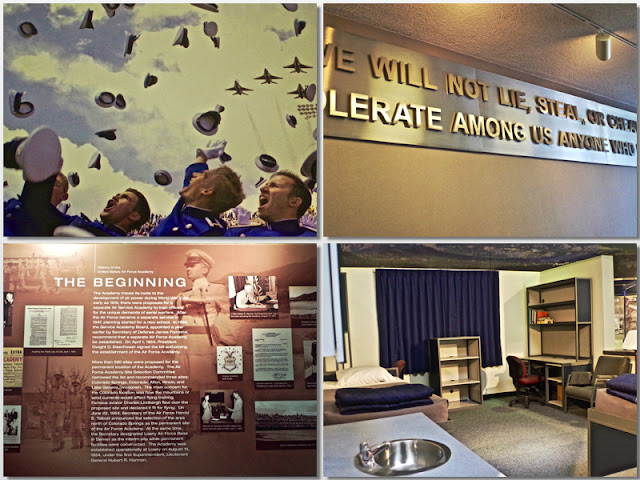 A map is given (and needed!) for you to take a tour of the campus.  Luckily, most areas of interest are in a central area.  The most visited is the Cadet Chapel.  Completed in 1962, originally controversial in its design, the Cadet Chapel has become a classic and highly regarded example of modernist architecture and was named a U.S. National Historic Landmark in 2004.  The first thing you see is it's row of 17 spires.  There are gaps between them that are filled with colored glass that create an incredible experience inside. 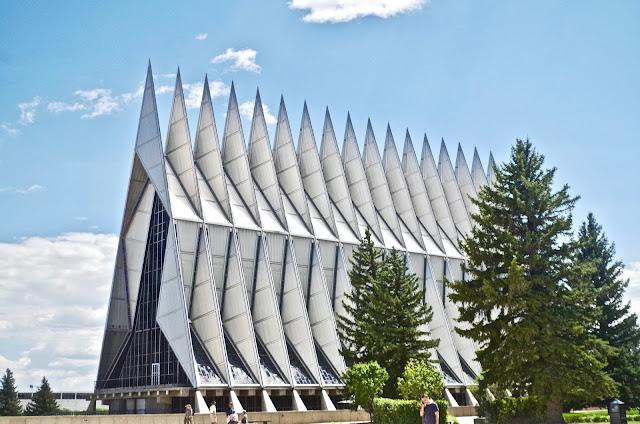 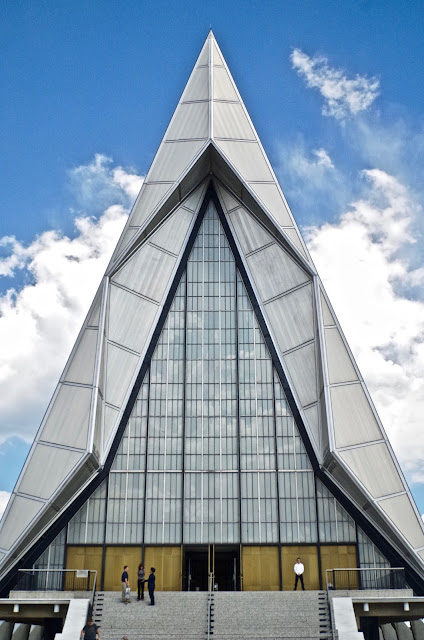 Besides it's beauty, what makes it really unique, is that it was designed to house three distinct worship areas under a single roof!  The Protestant nave is located on the upper level, while the Catholic and Jewish chapels and a Buddhist room are located beneath it.  Beneath this level is a larger room used for Islamic services and two meeting rooms.  Each chapel has its own entrance, and services may be held simultaneously without interfering with one another.  How is that for "co-existing"?  They haven't left anyone out, having an Earth-Centered Spirituality area for Wicca, Paganism and Druidism and an All-Faiths Rooms for worship for smaller religious groups.  I think the designer Walter Netsch did an outstanding job with this task!
Being a weekend, there were not many cadets on grounds, but we did see a few practicing here and there, which was nice.  Another enjoyable stop was at their Honor Court where they had various replicas of airplanes, statues and sculptures honoring members and squadrons. 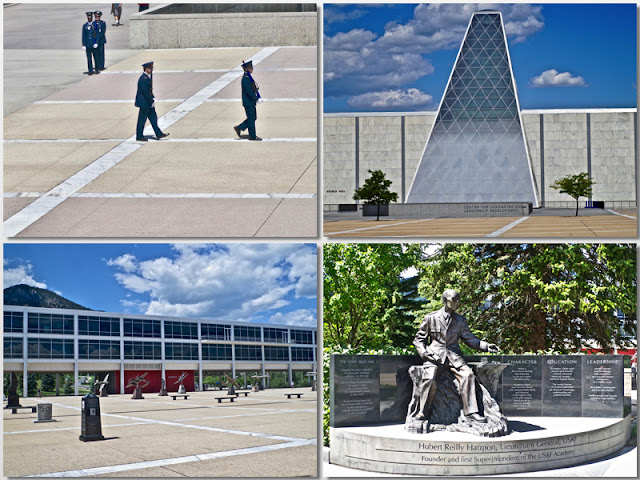 After walking our legs off this very large campus, we headed "back to the past"... to check out the Wild West Ghost Town Museum!

Jack and I have visited a number of Ghost Towns across the country, but this was nice in that it was inside, clean, and all in one spot.  It was well preserved, located within one of of the last remaining Colorado Midland buildings.  The structures were abandoned after the gold rush era in the 1800s and included a general store, saloon, blacksmith shop, jail, livery stable, rooming house and a beautiful Victorian house along with a ton of artifacts.  There were hardly anyone else there when we visited, so we pretty much had the place to ourselves. 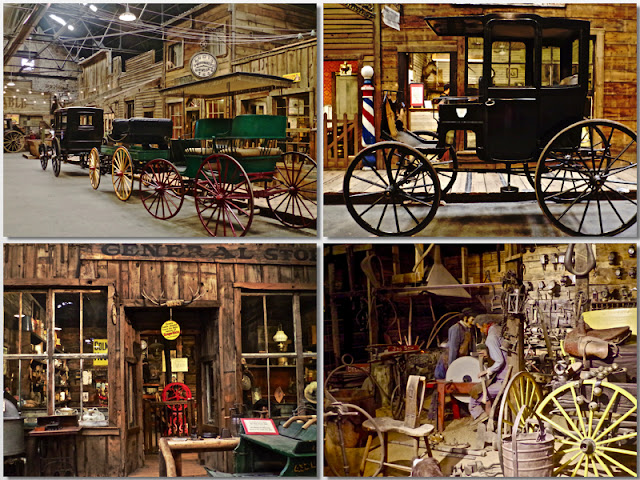 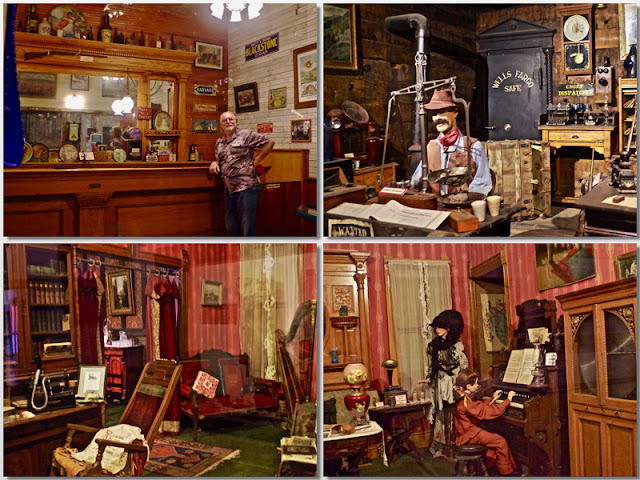 You could put a quarter in the player pianos and have a dance with your partner, or hop on a saddle and pretend you were a cowgirl, or even pet one of the last remaining bisons! 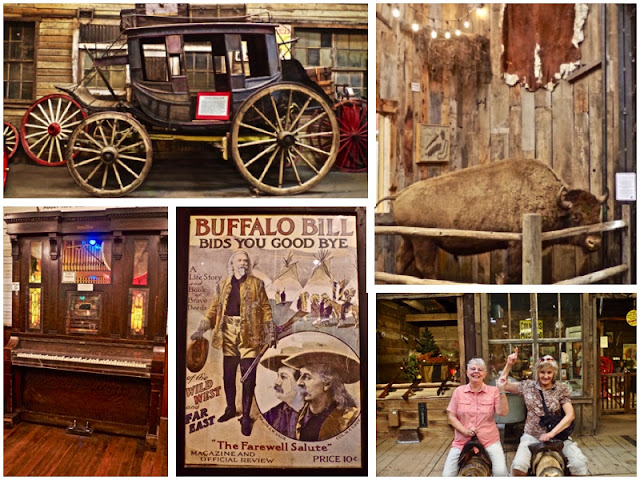 It was a great way to end our week together.  We had so much fun, saw so many new things and once again renewed our friendship with these wonderful people!  What more can two people ask for?

...kicking back in Colorado, Marie