Traveling The Loneliest Road in America...

Several weeks ago I read an interesting article about Highway 50, called "The Loneliest Road in America".  It was really interesting and it intrigued me enough that I told Jack that since we we going to be going through Nevada soon, why not give it a try!

"They say" that you really haven't seen America until you've traveled Highway 50 through the heart of Nevada.  In 1986, Life Magazine dubbed this highway, which follows the original Pony Express Trail through central Nevada, the "Loneliest Road in America."  This stretch of road is also part of the Lincoln Highway, America's first paved coast-to-coast road linking New York with San Francisco.  It's just you and the road.  History, adventure and intrigue.

The towns along the route have really invested in this, creating a wonderful adventure for anyone who wants to participate in it.  They have made "Official Hwy 50 Survival Guide" passports that you get stamped at various towns along the route (then send in the back and get a certificate signed by the governor of Nevada), pins, water bottles, as well as brochures, pamphlets, etc.

When we made our first stop and got our passport, I thought it would be "hokey" and they would laugh at me, but I have to say that at each stop the people were really friendly and super nice.  We had wonderful conversations and even learned a lot about some of the places and towns that we visited.  It turned out to be so much more fun that if we had just driven through without stopping!  We used the stops as "rest breaks" on the long drives and it really worked out well.  Some of the locations along the way, we couldn't stop because our RV was to big to park there, but all in all, it was great.

The drive itself was wonderful because the road was great (since there is hardly in traffic, it's well maintained!) and with almost no traffic, it made driving the speed limit, passing, etc a breeze!

Our views were great too...no billboards, no fast food places to look at, no ugly buildings to see...just lots and lots of "Mother Nature" to enjoy...well, that and a lot of highway!  The very first thing I saw, was a "heart" in the clouds...I thought it was a good omen, and a great way to start our trip!  ;-) 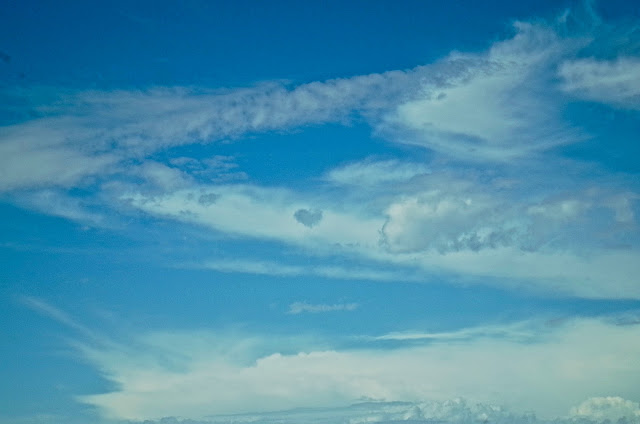 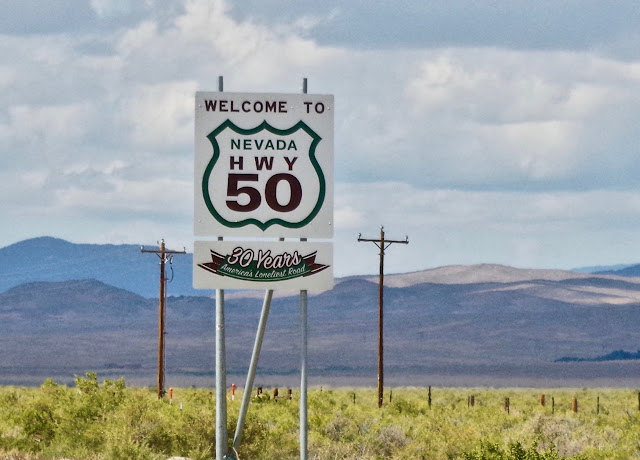 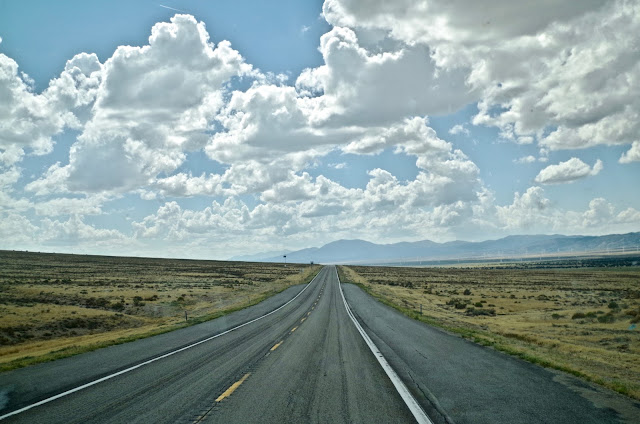 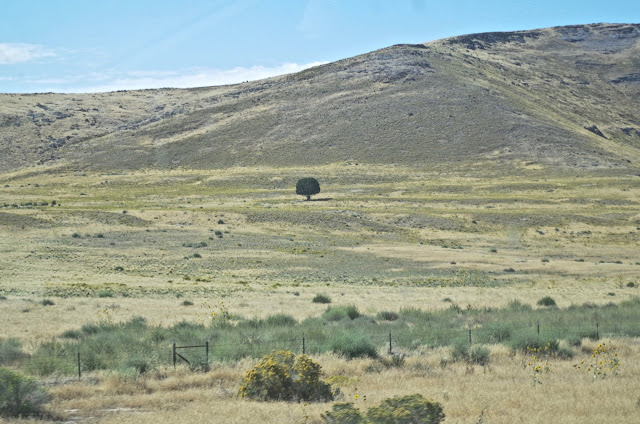 Every now and then, there was a surprise... 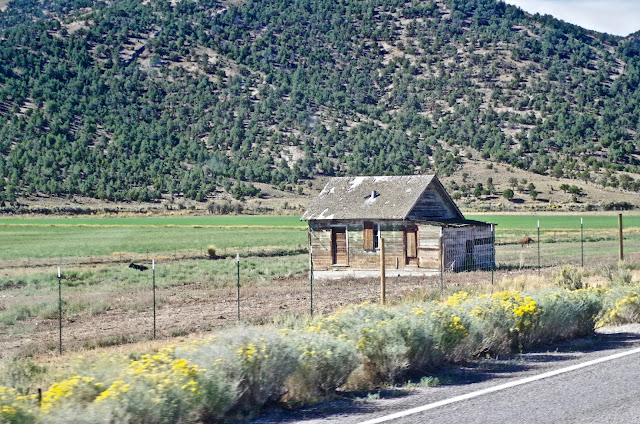 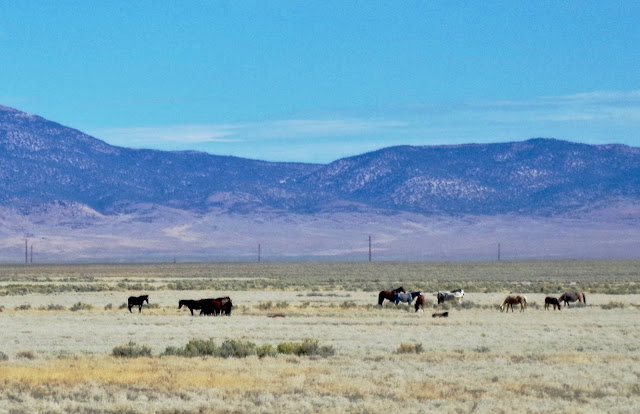 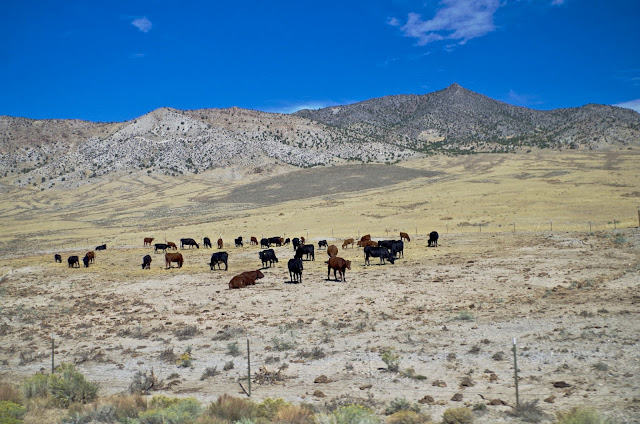 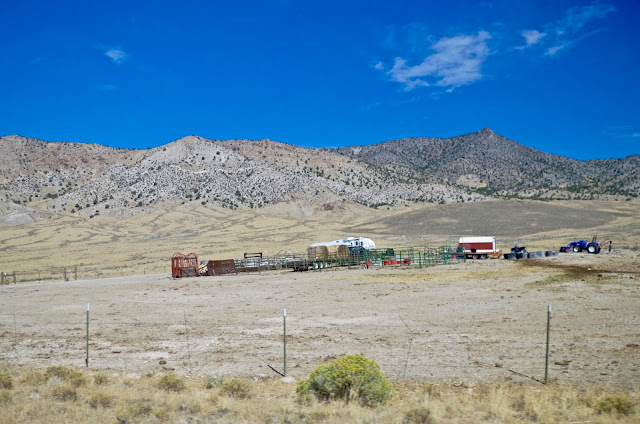 Our first night's stay was in the town of Ely.  This brought back fond memories for Jack, so after setting up the rig at our campground, we drove into town to take a look around.  Stopping in at the Visitor's Center to get our passport stamped, Jack asked if they "still had the Silver State Classic Challenge here"?  "Absolutely!  It's going to be here this coming weekend!"  ...and the conversation, shared stories and wonderful memories flowed from there!  Some 23 years ago, Jack and his best friend Steve drove in that race and had a fantastic time, one he has never forgotten about.  It goes from Ely to Las Vegas, with a grand "finals dinner" that night.  (They came in 3rd, in their class ;-)

We left the Visitor's Center and drove over to the East Ely Depot (c1907).  It was closed for the day, but we had fun walking around it anyway.  It's a pretty cool place and they not only do train rides, but you can stay in their caboose and/or bunk house and you can even be an engineer on the train!  Something to come back for, I'd say! 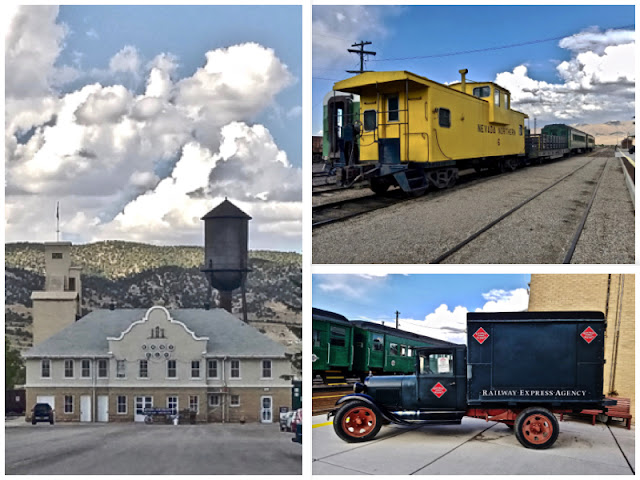 Our next leg of the trip we saw a bit more traffic...we even had a traffic jam at one point when road work was being done...  Phew...a whole 10 minute delay!  ;-) 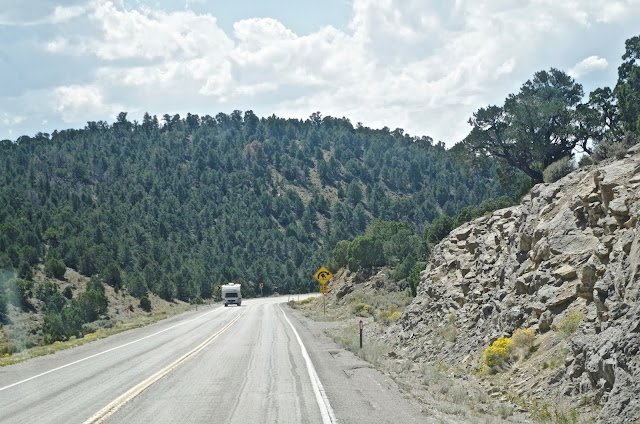 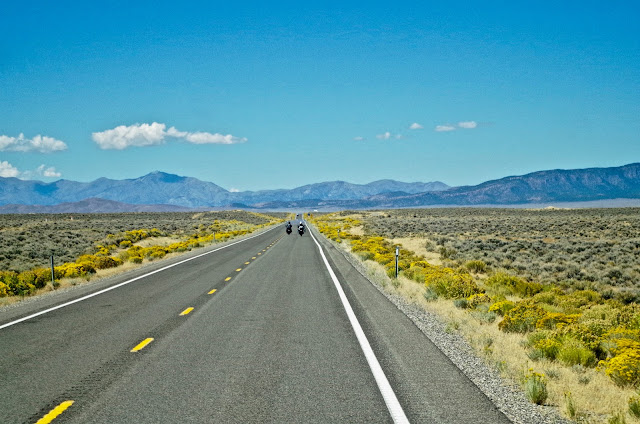 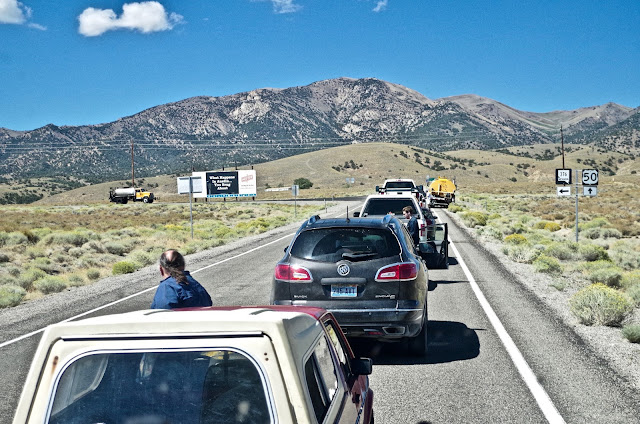 The next fun stop was in the town of Eureka.  We had to get our passport stamped at their Opera House, and as luck would have it, there was a nice long spot available right along the street outside their building!  The manager there was super nice and told us to check out the building, it dates back to 1880 and "to be sure and go upstairs and down the hall to see all the signatures!"  They make sure everyone signs the walls that performs there!  They also have a "Wall of Fame" of framed autographed photos of everyone too.  Very cool.  What a neat place that was.  See, we never would have seen this place if it hadn't been for that silly passport! 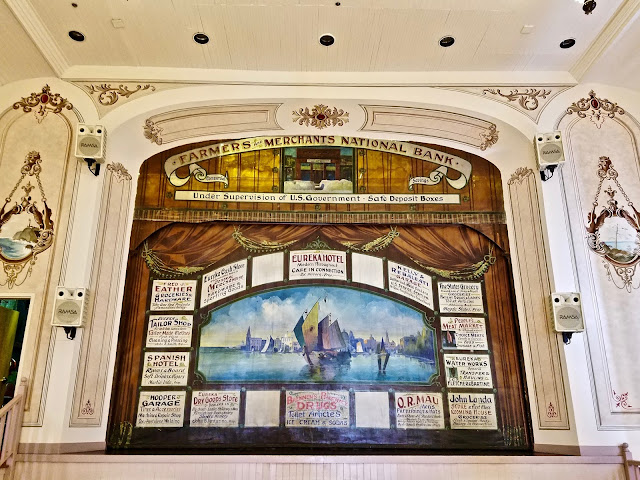 We experienced all kinds of terrain.  Sometimes the roads were flat and straight ahead for miles, and then up we would go, to more than 7,000 feet, curving all the way...then of course, back down again!  There would be times the view would be barren with not much more than some yellow flower on each side, to a forest full of trees.  Every few miles were different.  You never got bored. 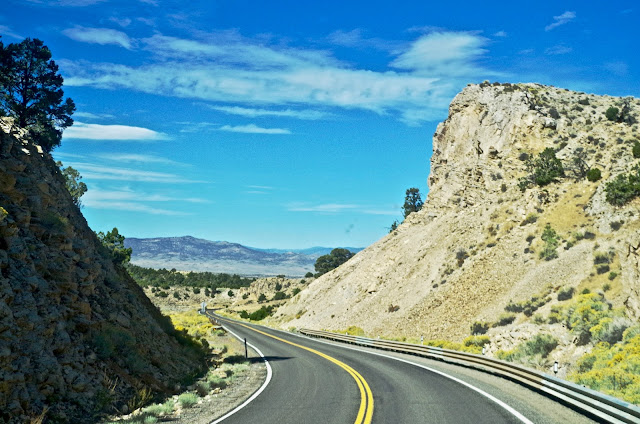 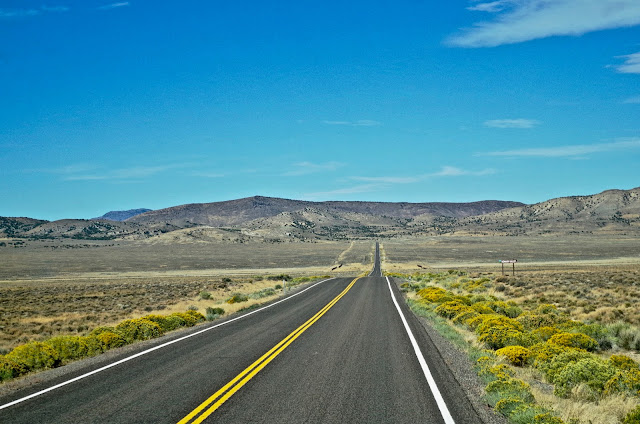 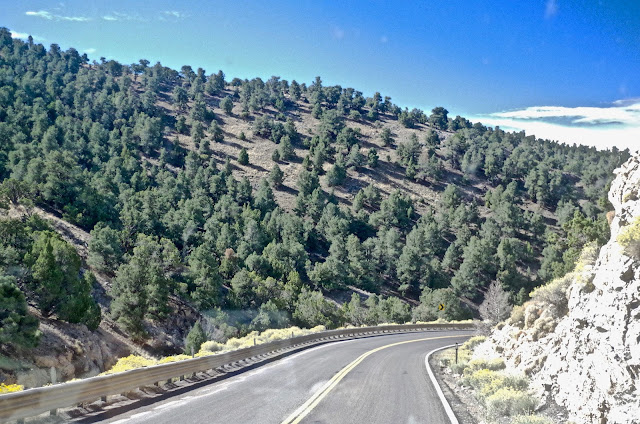 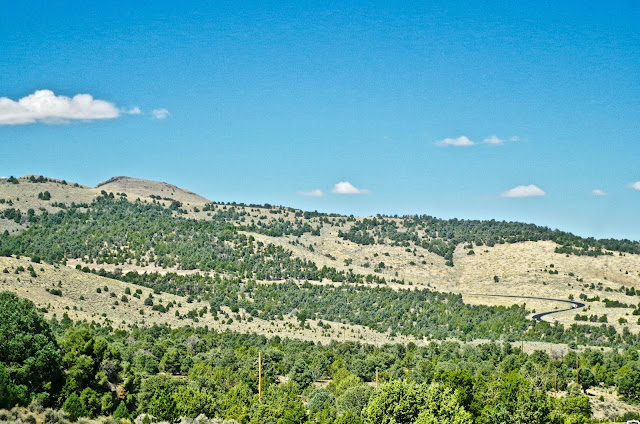 Just outside of Fallon, there were two interesting sights, one called the Sand Mountain, it wasn't much of a mountain per say, but what many consider to be one of the best OHV destinations out there.  The reason?  Instead of a sea of sand dunes, there is just one giant mountain to have the best competition hill in the country.  The other oddity was all along the road, where people "wrote" with rocks.  Evidently, they are the Alkaline Salt Flats, and it's "a thing to do" in Fallon! 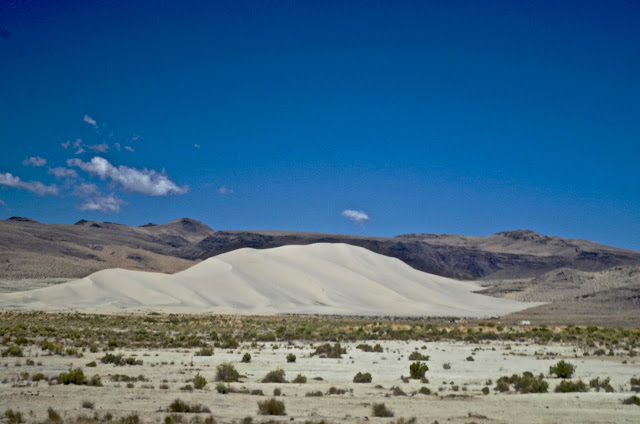 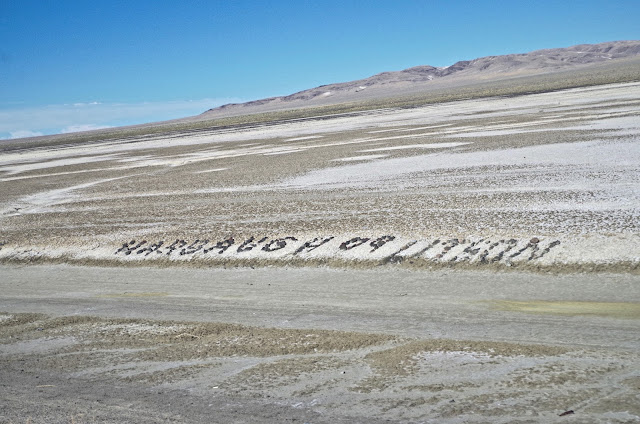 The end of the line...Fernley.  We met the nicest lady at the Chamber of Commerce to make our last stamp.  She even gave us a couple of water bottles to celebrate our "completion"!  I almost hate for this adventure to end, it's been so much fun!

We will be meeting up with our friends in Pahrump NV for a few days and I can hardly wait to share all this with them and encourage them to take this trip!  (actually, I wouldn't mind coming back and spending a little more time in a couple of the places myself!)

anyway, until then...on the road in Nevada, Marie