You know how you promise yourself how you will "return someday?"  Those promises you make to yourself when you visit a place that either you really enjoyed so much that you just want to come back again, or that you just didn't have enough time to see it (all) and had to leave, or drive right through it?  We all make them...but do we keep them?

Our first trip through Nebraska in 2012, we were scooting back "home" in October, with little time, as the fall was upon us, and we needed to get back to Washington before it got to late.  We happened to "pass through" North Platte, and discovered that they had a unique attraction there - the Golden Spike Tower that over-looked the Bailey Train Yard.  Now, Jack and I love trains...Jack, of course is more into the mechanics of them than I am, but both of us are fascinated by them.  When we read what the Golden Spike Tower and the Bailey Train Yard was, we immediately got excited and headed our RV right towards it, hoping we could spend some time exploring this great place!  ...we got there 15 minutes before it closed...

We rushed up to the top of the Tower, and spent those 15 minutes watching all that we could, talking to the gentleman as much as possible...but all to soon, our 15 minutes was up, and we had to leave..."promising ourselves we would return...someday".

That "someday", finally came this past week.  It has taken us all these many years, but, we kept that promise, and booked ourselves 4 days in North Platte Nebraska!   ;-)

The Bailey Yard is the World's Largest Rail Yard in North America, having 2,850 acres, 8 Miles long, 2 Hump Yards and 1 Diesel Shop.  From atop the Golden Spike Tower, you can watch the action from two different observation decks (one enclosed/one not) as the crews of  the Union Pacific Railroad sort and connect over 10,000 cars a day on two classification hump yards, with nearly 120 bowl rows and 315 tracks.  Even if you are not a "train nut" it's pretty fascinating. 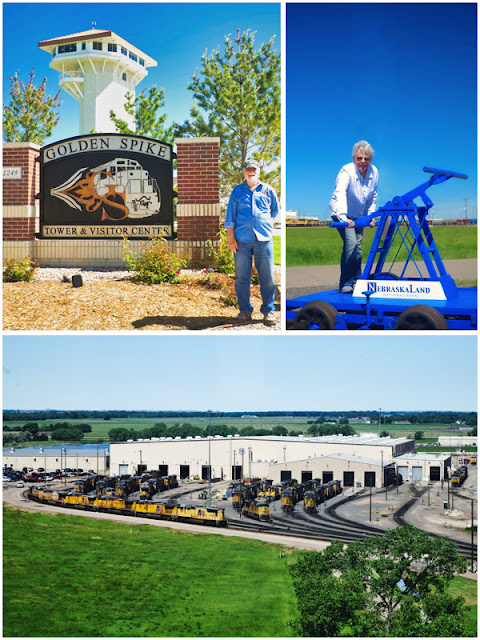 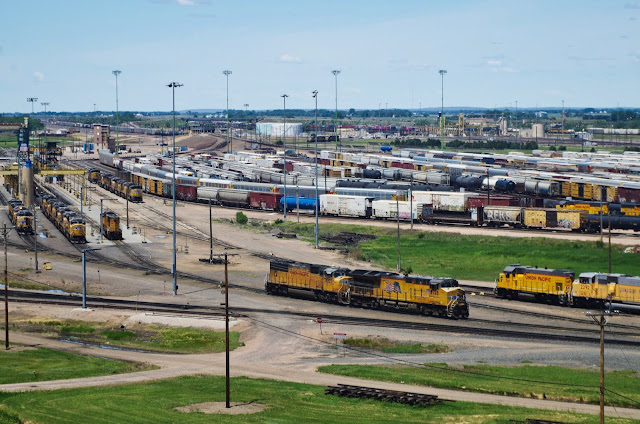 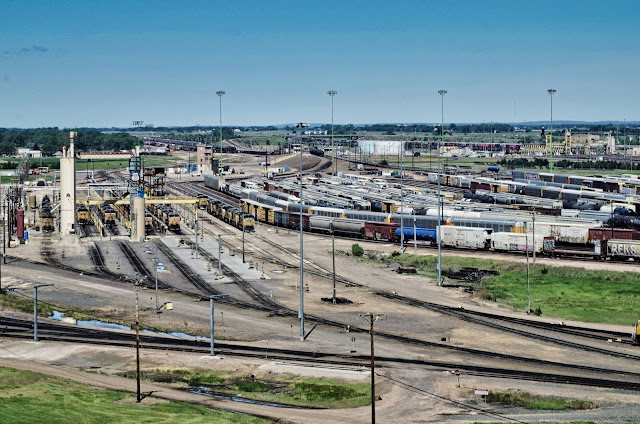 Well, once we got our fill of trains, we now had time to explore North Platte and see what else there was to see...it turned out, it has several interesting things!

One, was the Grain Bin Antique Town!  Seems some folks gathered up about 20 historic wooden and octagon granaries and relocated them out in the country, along with a very large building and started filling them with antiques!  They kind of "themed" each one, linens in one, china dishes in another, tools in another, etc.  When we went out there (after quite a long, dirt road ride) we were practically the only ones out there!  The gal shared with Jack (while he waited for me) that they had just started opening on Mondays, but usually on weekends, the place is so packed they have to have people direct traffic! Yea for us!  I had a ball wandering in one building after another all by myself...and of course found some goodies I just couldn't live without!  ;-) 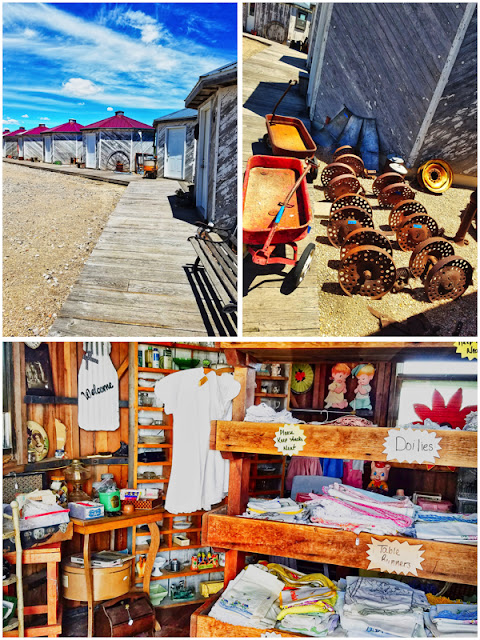 The other wonderful discovery we made the Buffalo Bill Ranch State Historical Park!  Seems this is where Bill Cody and his wife settled down and built a beautiful home and raised their family back in 1887.  His sister is actually the one who took charge of the design and construction while Cody was out on the rode.  It's of the "Second Empire" style with Eastlake and Italianate features and was built and furnished at a cost of $3900.  It originally had two barns, but a T-Shaped one burned down.  He had the home built with "retirement" in mind, and named it "Scout's Rest Ranch" and had that put on the barn. 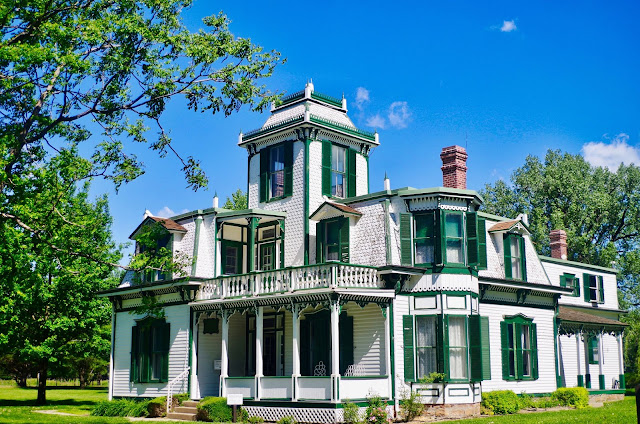 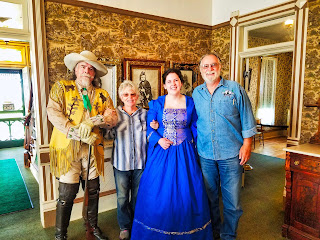 When we arrived, we were greeted, much to our surprise, by Mr. Cody and his wife Louisa!  As there were no other visitors at the time, Mr. Cody spent some time with us, telling us a number of wonderful stories about the ranch and his adventures.  He was quite an enjoyable storyteller and made our tour of the home complete!  It was so nice to be able to stroll through the house and barn and then out to see the new baby buffalo.  It is a beautiful place, but seeing pictures when Cody lived there, it was sure "out in the middle of nowhere, surrounded by a whole lot of dirt!".  Wow...hardy people... 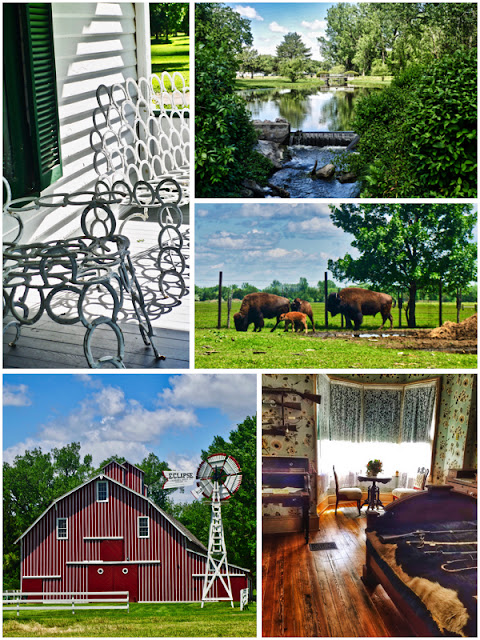 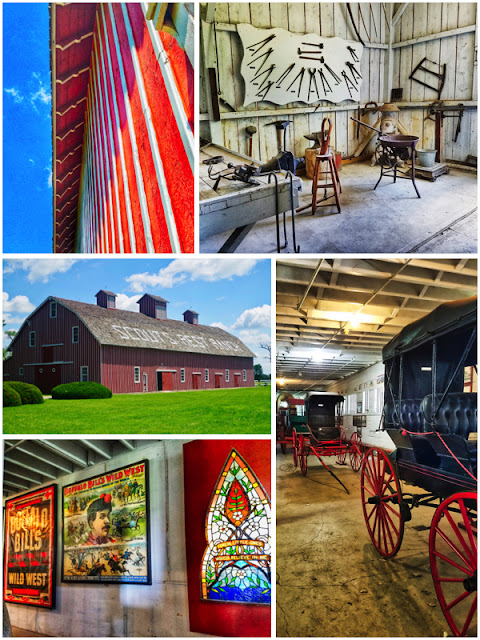 Well, after a time of relaxing, now we are off to Wyoming!