Every now and then it's fun to gather with other folks who also have RVs like ours...well, sort of, anyway...  We have a Tiffin RV, and this was a Tiffin Rally, set up in Rock Springs WY for a week of fun, food and classes.  About the only thing we had in common with the other RVs was that ours was made by the same company...

You see, all but two others (out of over 300) were almost brand new ones, or less than five years old, anyway.  Ours, on the other hand is a "classic" at 12 years old (2007).  It really looks it to, in that it's all white with gold swirls, while all the newer ones are all black shiny ones and much bigger & taller.  Don't get me wrong, we love our sweet coach, and in truth, ours probably gives us a whole lot less problems than the more expensive ones do, it's just that it stands out from the crowd a bit, and looks a little funny tucked in from the rest...kind of like the "poor kid on the block". 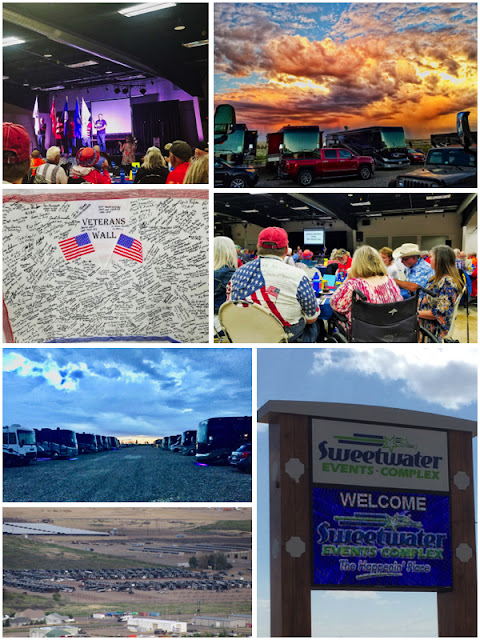 When the newer ones start around $250,000, you know you are in with the "wealthy crowd" especially when they talk about their "other homes" in Huntington Beach or Whitby Island, etc.  I just smile...

The "retirees" are getting younger too (or am I just getting older?)  I was talking with a gentleman who is just now 60, and he retired 9 years ago!  "Wow" I thought, "how did he do that?"  ("and afford a Tiffin Motorhome too?").  They announced the folks who bought brand new coaches while at the rally (27 people) and one couple didn't even look like they were 50 years old!  My husband said maybe they are using it to work from and writing it off as well; that made me feel better....;-)  It's always fun to meet new people and chat with them though.  Everyone is always friendly, no matter what they own.

The Allegro Club folks did a great job with the entertainment each night.  A Beatles group one night, a Jukebox Music group another night, the best was a young man playing the piano though, his name was Brady Goss.  Boy could he play!  Everything from blues to country, singing, playing the piano and few songs on the guitar.  He played Jerry Lee Lewis to the Eagles, to Merle Haggard to America the Beautiful.  Just fabulous. 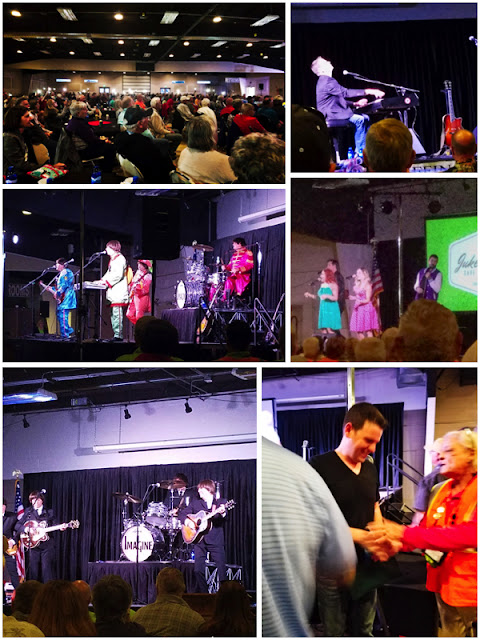 I had hoped there would be more vendors here, even though we spent enough as it was (always seems to be that way).  It's just that I had hoped Rand McNally GPS systems would be here, as my plug-in broke just as we were arriving and I need a new part!  ;-(  It's also more fun to look at more "goodies"...but, that just means more "temptations" too!

Oh well, all good things come to an end, and so did this one.  We opted to stay on the extra day, as we have been to other rallies where everyone left at the same time, and it's not much fun...bumper to bumper getting out!  So, we'll leave tomorrow up to where some hot springs are and do a little "natural soaking" and see how that feels...ummm...