The sandy shores of South Carolina...

Our first week’s stay was a “base camp” in Walterboro South Carolina.  That gave us good access to Hilton Head, Bluffton, Charleston, Edisto Beach, Hunting Island, Beaufort and Columbia.

We decided to go see what Hilton Head was all about and check out their lighthouse while we were at it - so off we went!  On our drive there, we spotted this fun sign that let us know “yep, we are definitely in the South now!”  ;-) 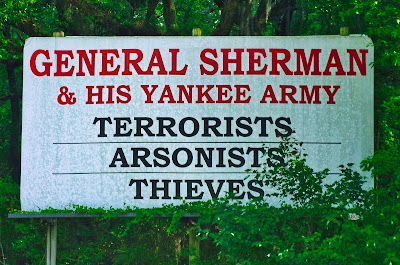 I’m not sure, what I expected Hilton Head to be like, but whatever that was, it was not what we found.  If you didn’t come to golf (we didn’t) or shop tourist beach kitch (ok, we did some of that), lay on the sandy beach (I took a small sample and some pictures) or ride a bicycle around the island - there wasn’t much else to see or do!  The “lighthouse”, though pretty, was really a decorative piece in the Village, rather than a real lighthouse - but that didn’t stop me from adding it to my collection!  ;-) 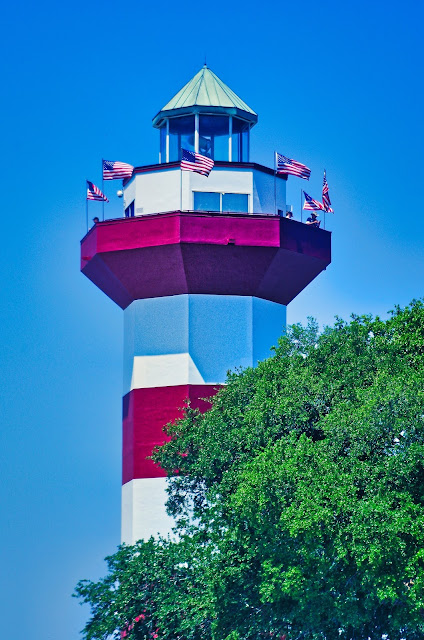 We quickly bored of Hilton Head and headed to the quaint town of Bluffton with it’s historic district and small-town charm.  The Bluffton Oyster Company is still shucking and selling oysters since it opened in 1899!  A family run operation, the oyster company actually sits on reclaimed land, built up by more than 100 years of discarded shells from previous sucking operations.  (I took a couple for souvenirs!)

The other beauty there was The Church of the Cross built in 1857. 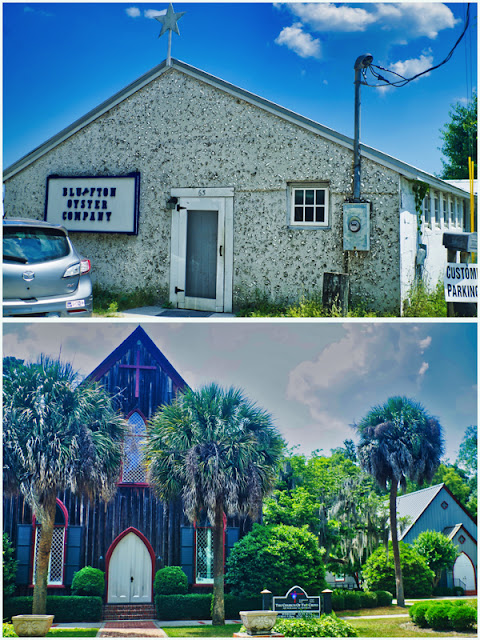 We did go to Charleston for the day, but because we’ve been before, we just enjoyed walking around and having lunch.

Our next adventure took us to Edisto Beach!  The funny thing about this trip was, it was not in our AAA Book and is tiny on the map - but - we had three very large brochures (that I had left in the rig, of course) about this island…so when we saw the sign for the beach, we decided to take it - What the heck, let’s check it out!”  So, we turned right and drove on down the road, and drove, and drove…and drove….We were not sure what we were going to find…but what we did find was a small beach town with three seafood restaurants, all very crowded (40+min. Waits) and not much else!  We stayed for lunch…Food was good (ALL seafood is good here in the coastal South!).

After we got back, we read the brochures and found that there actually was several small areas we could have ventured to see (a little late now!), but mostly it’s a summer beach rental get-away place!  ;-) 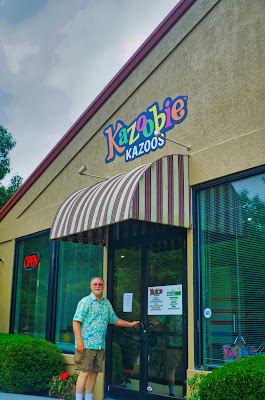 The following day we started off with a factory tour!  If you know us, you know we LOVE to do these, so when we read that Kazoobie Kazoos gave factory tours in Beaufort, we jumped at the chance!!  What fun!  Boone, was our host and what a wonderful guide he was too.  He turned what could have been a 20 minute simple boring-mater-of-fact informational tour into a fun, entertaining, educational, delightful, energizing, memorable 45 minute experience!  I could hardly wait to make my own and then to shop for “special”  ones for my fellow “clown” friend and my young grandsons! Toot-ta-ta-toot!  ;-)

After we got that fun out of our system, it was off to see the ton of things Beaufort had to offer!

We decided to start at the far end and work our way forward  - especially since I like to make sure I didn’t miss seeing the “lighthouses”!  So, we drove to Hunting State Park to see that black and white beauty.  They charge to get into the State Park, and then extra to climb it (167 steps) and it was booked for the day (ok by me!), but they let me inside the door to take a picture of the original fresnel lens.  Nice.  The light keepers’ house burned down and all that remain is the foundation.  The Lighthouse was put into service in 1859 and decommissioned in 1933. 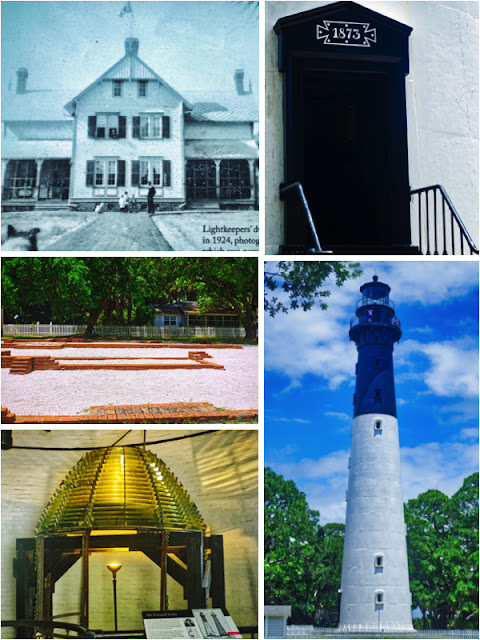 Afterward we drove across the bridge to the small island of St. Helena.  This truly felt like taking a step back in history.  Starting with the Parish Chapel of Ease ruins built in 1740 to serve planters in St. Helena who lived great distances from the parish church in Beaufort to Penn Center dedicated to preserving Sea Island history and culture.  Founded in 1862 to educate freed black African-Americans.  The site has also been used as a training and meeting facility for Civil Rights workers in the 1960s.  M L King spent time here and it is believed composed his “I have a dream” and his Nobel Peace Prize acceptance speech notes here. 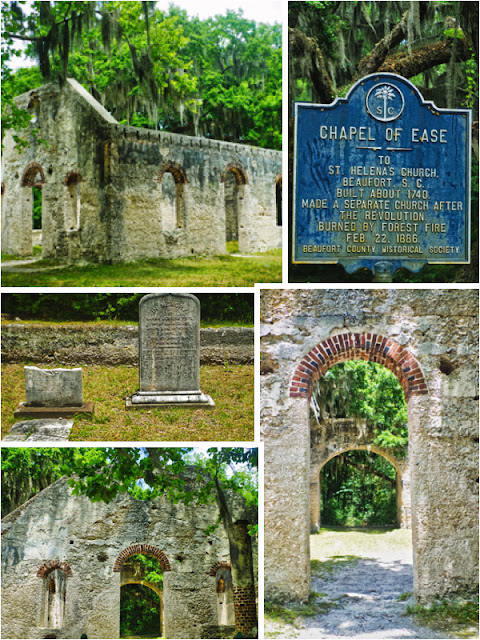 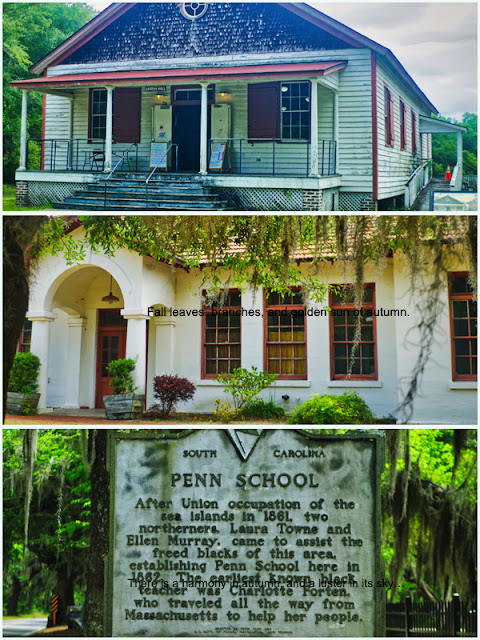 The Gullah-Geechie history is prevalent in this part of South Carolina.

Leaving St. Helena, we drove over two more bridges and we were in the “heart” of Beaufort.  With map in hand, I had circled all the “special sights” I wanted to see, and my trusty driver drove us from one to another! 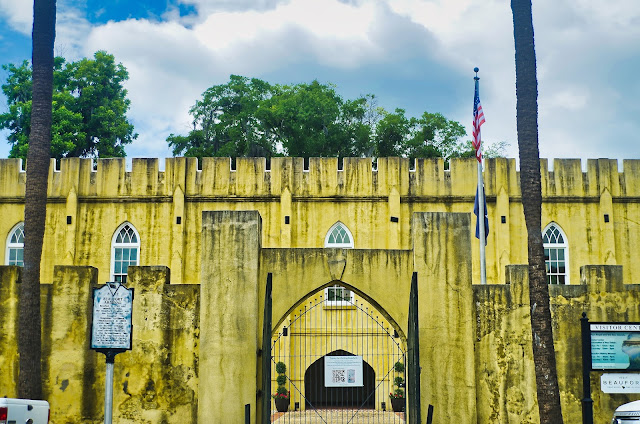 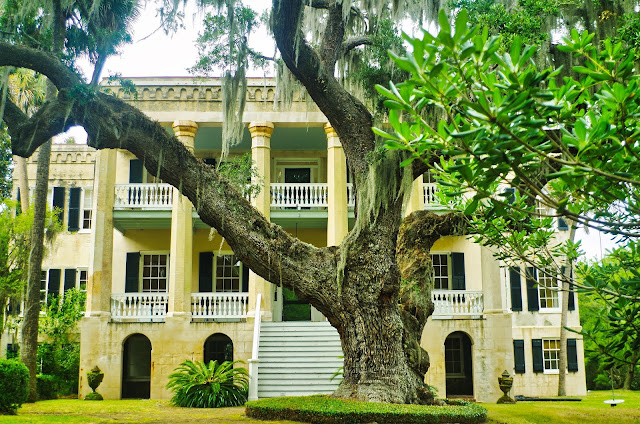 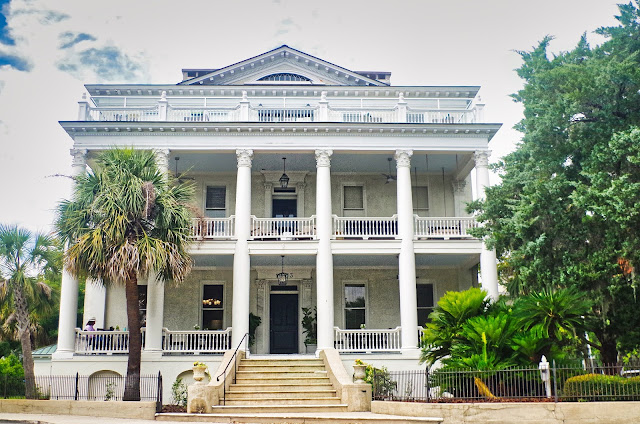 4.  The Parish Church of St. Helena (c1712) - Was a beautiful old church with a wonderful cemetery attached.  It had a great many high ranking war heroes including Thomas Hayward Jr. (1746-1809), a signer of the Declaration of Independence, who served as a parishioner during the Revolutionary War era. 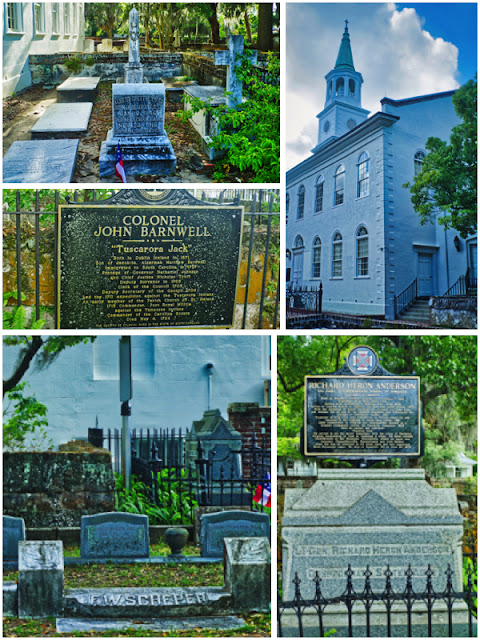 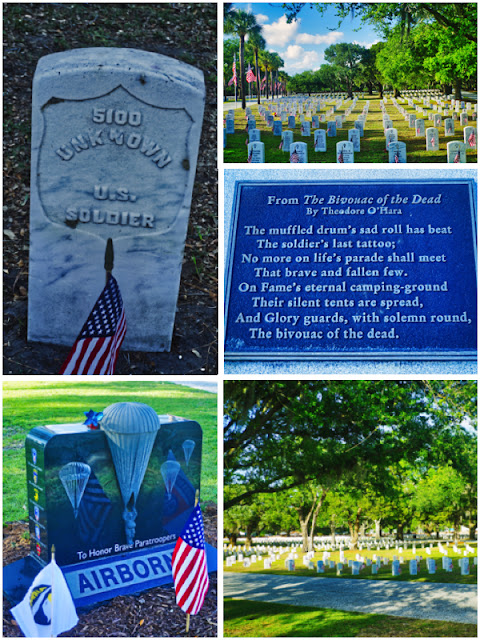 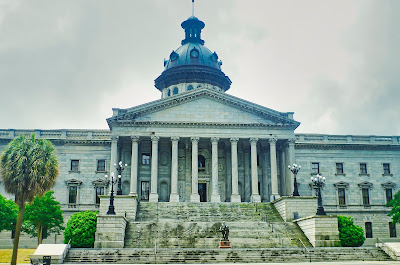 The following day we went to the State Capitol in Columbia.  Luck was on our side as we arrived at 11:25, it turned out we were the only two people for the 11:30 tour, so we got a wonderful private, personal tour!    Paul was a fantastic guide, full of terrific information, not only on the State House, but on Revolutionary War history (he and Jack enjoyed sharing their mutual knowledge on that subject - while I just listened).  The affects on So. Carolina and on Columbia in particular.

The State House is lovely, as is typical of Southern homes.  Beautiful local blue granite columns, Southern pink (Georgia) and white (Tenn.) marble tile floors, the staircase is wrought iron, decorated on the banisters with yellow jessamine, their state flower.  Their lobby was adorned with a number of paintings, plaques and statues that reflect the state’s history, including some incredible mosaic glass windows! 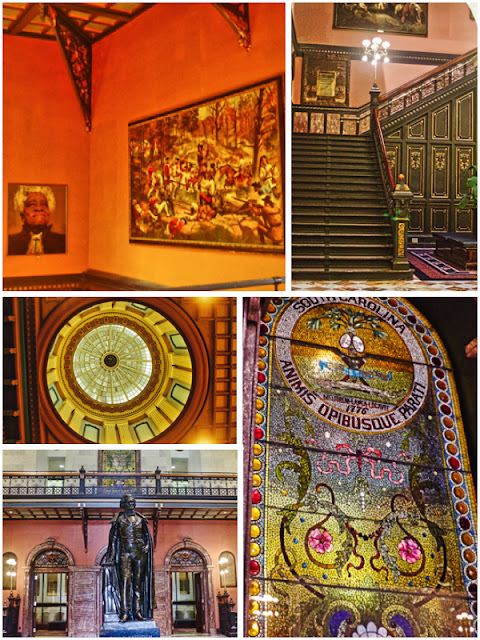 The Senate Chamber is comprised of 46 members that have large elegant desks.  The meetings are called to order when a Sargent of Arms places a silver etched sward bearing the state seal and yellow jessamine in brackets on the front desk that activates the original lamps on each side.

The House Chamber has 124 members which share desks.  Here the mace represents the authority and was made in London in 1756 and is the oldest original mace used in this country.  Hidden during the American Revolution, it disappeared for over 40 years.  It was later discovered in a Philadelphia bank vault in 1819. 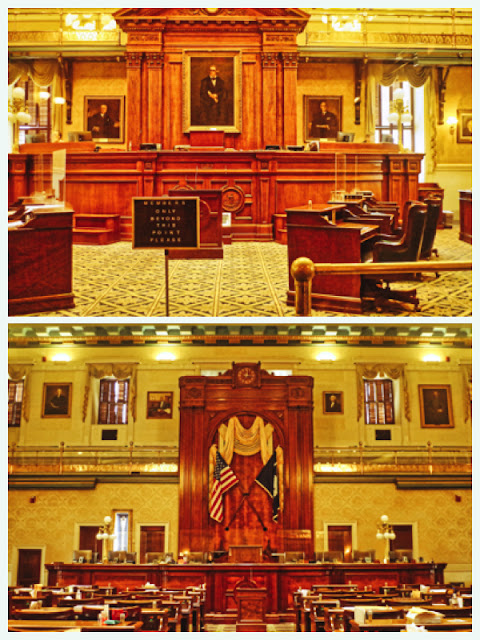 As beautiful as the State House is - the grounds are just as impressive.  The “complex” sits on 18 acres that is more like a park than Capitol Grounds.   As you walk around, you are surrounded by dozens of different types of trees, filled with flowers and birds of all kinds chirping away.  It was so inviting with benches dotting pathways looping through and around the more than 25 various monuments.  Some of our favorites were - 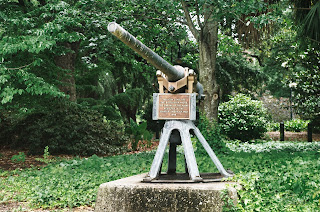 An unusual Gun from the Battleship Maine 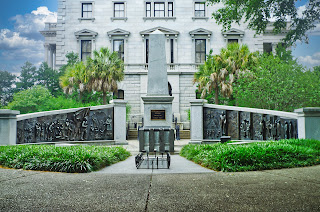 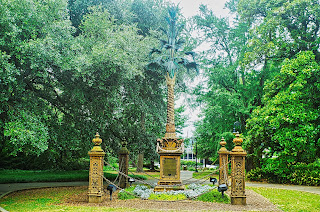 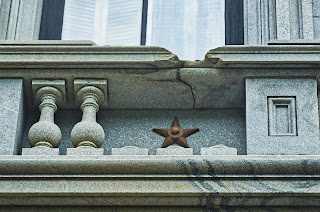 Bronze Stars - showing where the Union’s cannonballs hit the State House during the Civil War in Feb. 1865 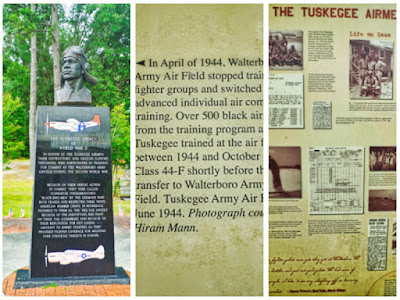 Before we left Walterboro, we drove downtown to see the Tuskegee Memorial.  It wasn’t as big as I thought it would be (or should be), but they had some information boards there I found very interesting including that Walterboro was one of the locations used as a POW Camp for Germans during WWII.  It seems they not only housed them, but taught them English and had them help with some of the local jobs.  Some of them ended up keeping in touch with them after they were released.  After all, like our soldiers, many were just young boys doing what they were told to do, far from home and scared.


Well, we are now off to our last three days in South Carolina to check out the Myrtle Beach area!

…on the road,  Marie