Looking at the skies over New Mexico

Hot Air Balloons and Albuquerque are almost synonymous, since you can't hardly think of one without thinking of the other.  After all, balloons have been flying over the skies of Albuquerque every October for over 40 years now, and the people just love it.

How and why did it all get started?  Well, those questions, and the whole "ballooning history" is all told in the wonderful Anderson-Abruzzo International Balloon Museum in Albuquerque.  They take you back in time to the very beginning of ballooning, where the very first balloons went up (with a duck, a sheep and a rooster) in France.  Through the war years, on into the space age.  And how did Albuquerque end up with a balloon festival back in 1972?  Well, it began as a highlight of a 50th birthday celebration for KOB Radio.  The radio station manager, Dick McKee, asked Sid Cutter, owner of Cutter Aviation and the first person to own a hot air balloon in New Mexico, if KOB could use his new balloon as part of the celebration. The two began discussing ballooning, along with conversation and help from Oscar Kratz, and McKee asked what the largest gathering of hot air balloons to date had been. ”19 balloons in England”, Cutter replied. Kratz asked “Can we get 19 here?” Cutter said he would try. He got commitments from 21 pilots, but bad weather kept some of them from arriving in time for the festivities. The first fiesta ended up as a gathering of 13 balloons on April 8, 1972, sponsored by KOB. The first event was located in the parking lot of the Coronado Center Shopping Mall with 20,000 spectators and with balloonists from all over. McKee, Cutter, and Kratz are the three men who had originally started the balloon races.

The next year Albuquerque hosted the first World Hot-Air Balloon Championships in February and the fiesta became an international event.  In 1975 Albuquerque was looking at hosting the World Championships again, but the event was scheduled for October. So the fiesta was moved to correspond with the championships.  The Balloon Fiesta grew each year for decades, and today it is the largest balloon gathering in the world.  The number of registered balloons reached a peak of 1,019 in 2000, prompting the Balloon Fiesta Board to limit the number to 600 starting in 2009, citing a desire for “quality over quantity”.  Spectators can reach over 100,000 on any given day.  A number of years ago, Jack and I were just passing through, and lucked out, that it just happened to be on "the day" of the fiesta.  We stopped for gas and saw cars pulled over everywhere with people looking up...so we did too!  Wow, what a beautiful sight!  The sky was full of every kind of balloon as far as you could see!  It was spectacular!  See...it pays to look to the sky! 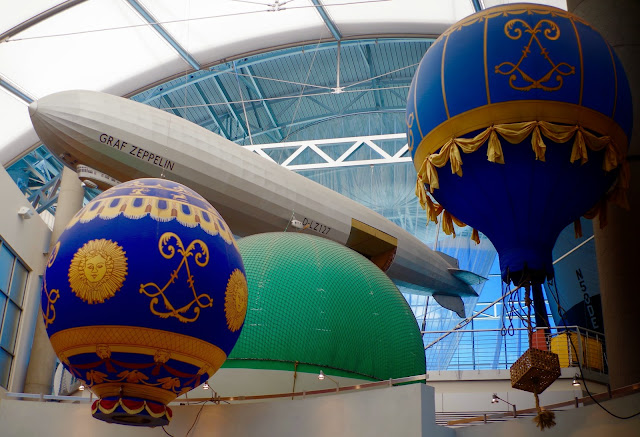 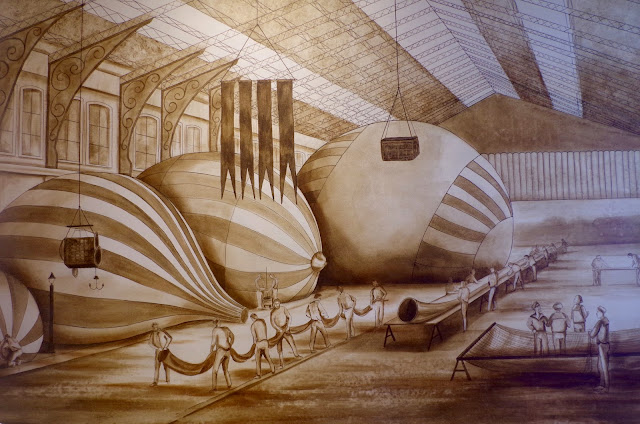 "The Balloon Goes to War" 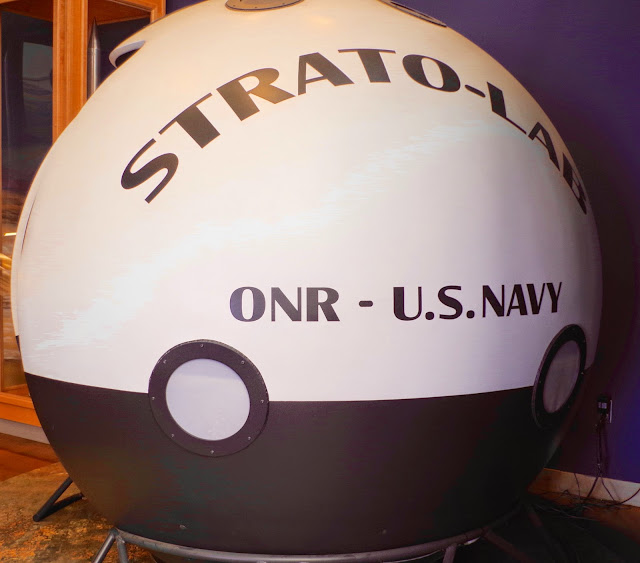 Aeronauts Before Astronauts, The Strato-Lab 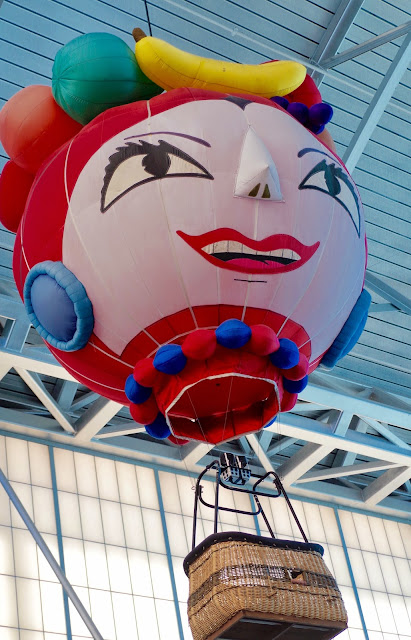 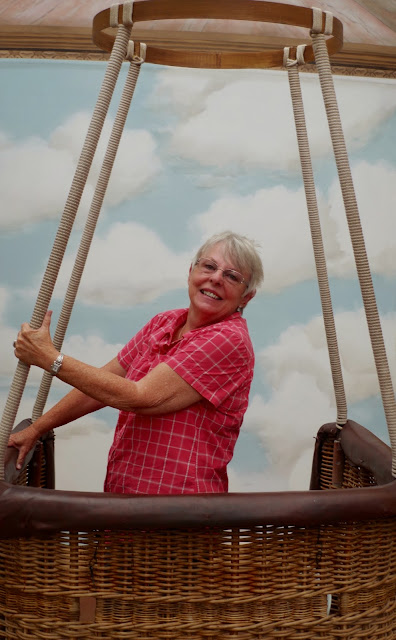 Another sky, about a hour and half outside of Albuquerque, gives you a whole other experience.  This sky is quiet, filled with stars, and away from city lights.  It affords the "best view" for the 27 Very Large Array Telescopes run by the National Radio Astronomy Observatory in Socorro New Mexico.  Do you remember the movie "Contact" with Jodie Foster back in 1996?  This is that place!  One very big difference tho...they are not for listening...they are for seeing.  Simply put, "regular" telescopes can see a small portion of the galaxy, VLA, using radio waves, lining up together, can see a very large portion of the galaxy.  Thus, they have been able to discover areas of the galaxy (black holes, gas & dust clouds that optical telescopes cannot see into).  Because they use radio waves, they are not limited to night vision either, they are "on" 24 hours a day.  Since it first began watching the skies back in 1976, the VLA has observed nearly 43,000 different cosmic objects.

Each of the 27 antennas in the array weighs over 230 tons, is 82 feet across and over 90 feet high.  They are on 82 miles of railroad tracks in a "Y" shape.  Most of their staff are in the town of Socorro, a core of 50 staff members, including 24 hour security, are kept busy on-site in the desert by the VLA's diverse needs.  The views from each of the 27 active antennas in the array are sent down fiber optic cables to a supercomputer.  The supercomputer mathematically merges the 27 views, uniting the array into a single, powerful telescope.  The merged observations of the VLA have the qualities of a giant telescope with an eye 22 miles across!  Now, that's really seeing some sky! 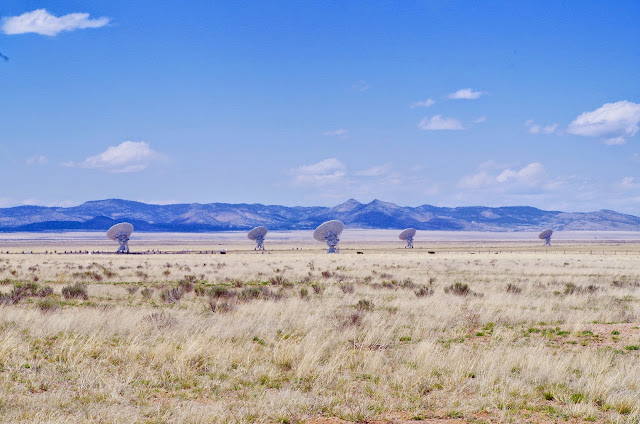 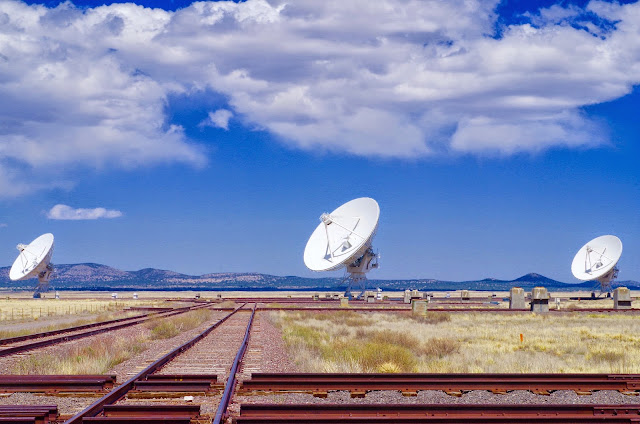 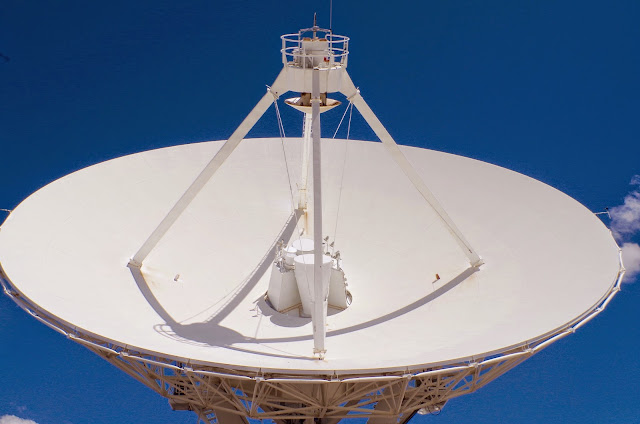 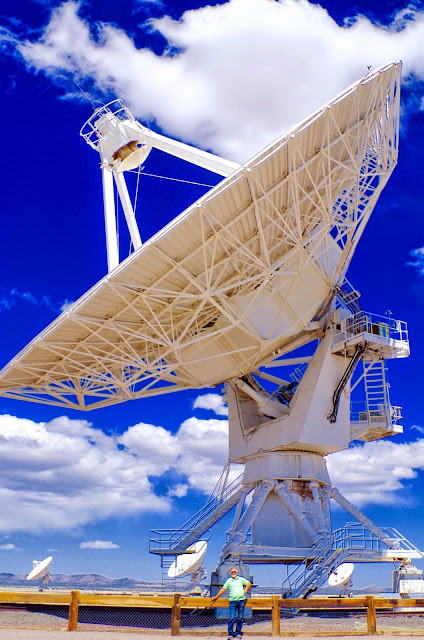