Toot! Toot! All aboard the Cumbres & Toltec Scenic Railroad!

Hearing the train whistle blow, seeing the black smoke billow and the white steam hiss is a regular adrenalin rush for me!  Not unlike car, boat or horse races for others, I'm guessing.  I'm not sure why, but I have always loved trains, everything about them!  So, of course, whenever we can, we take the opportunity to travel on one.  The "older" the better!

I read about the Cumbres & Toltec Steam Train out of Chama New Mexico, several years ago, and had it on "my to do list", but it only operates from Memorial Day through October, so timing is tough.  We've just always missed their window...until now.

We came into Chama a couple of days early and stayed at the Rio Chama RV Park, which is just down the road from the station.  We were booked to take the train for the "second day" of their summer opening for the 2015 summer season.  They had all kinds of special activities planned for the first day, so we planned on being there for that.  In the mean time, we thought we would go over to the train station while no one was there to "check things out".

While we were there, we met "John", one of the "Friends of the Cumbres & Toltec Railroad" - a group of volunteers who love and work to repair and restore the deteriorated cars and buildings.  We chatted with John for awhile and learned a little, but it wasn't until the following day that we really hit the jackpot!  After watching the ceremonies for a bit, I saw John and another gentleman sitting on a platform towards the end of the station and teased them that they had the "best seats".  They invited me up to join them.  "Bob" introduced himself and we soon became great friends.  Bob shared all kinds of stories with me (and soon Jack joined us) - showing me some of the props from the movie Indiana Jones with Harrison Ford, including pointing out the Water Tank he swung from.  Showing us signatures of workers going back to 1924.  He lives 7 months in Phoenix and 5 months here working on the trains.  "You guys could travel 7-9 months and then spend the rest of the time here doing the same!"  He got us thinking...might be kind of a fun summer project...next year!  hm mm... 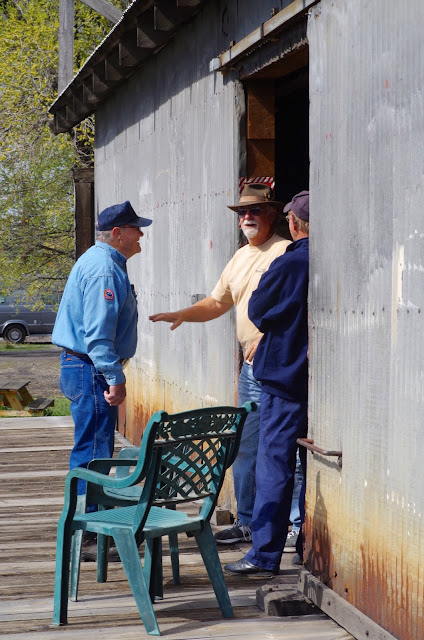 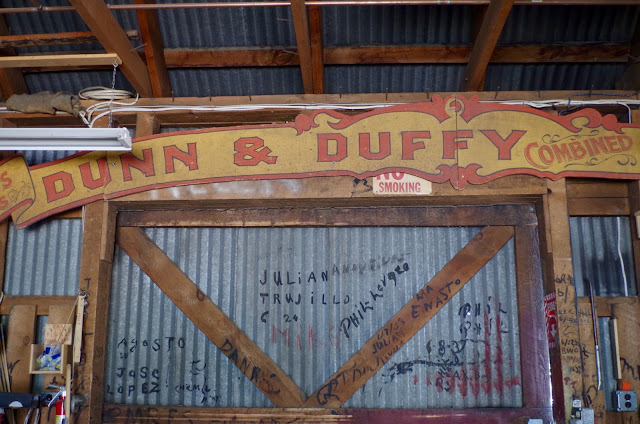 Movie memorabilia from "Indiana Jones" with Harrison Ford - shot at this location, along with signatures from workers back to 1924 on the door 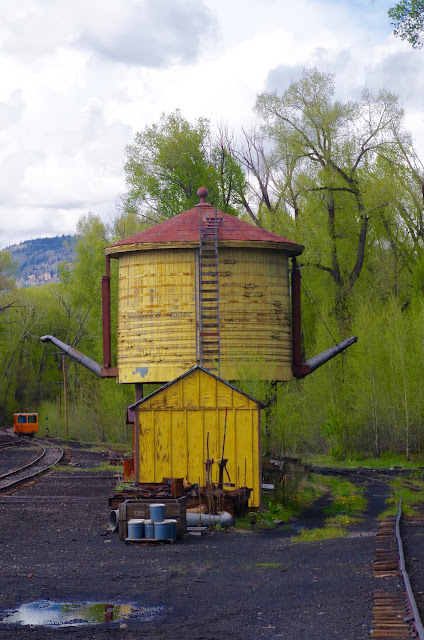 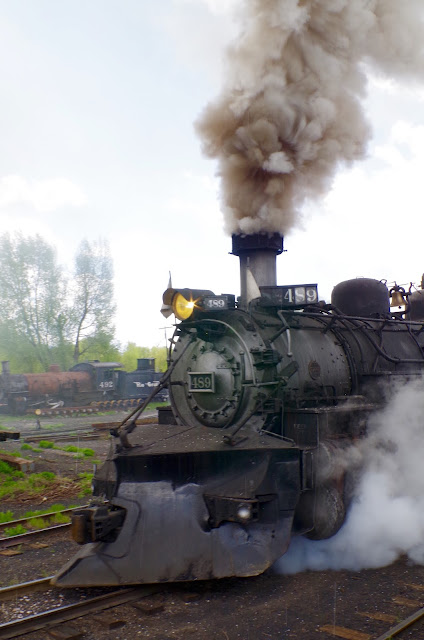 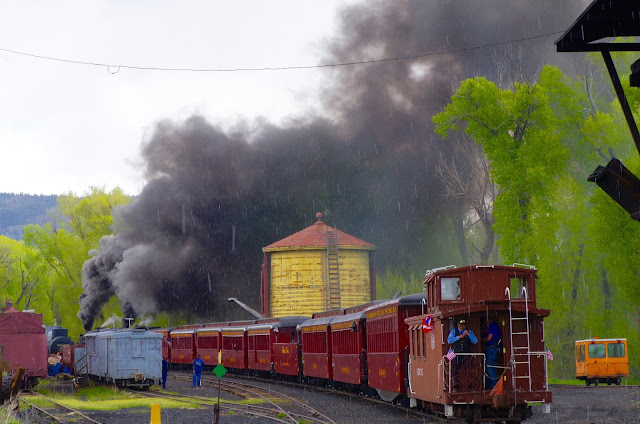 The Cumbres & Toltec is the nation's biggest, longest, highest most exciting narrow gauge railroad operating today...and so worth the wait!  It goes from Chama New Mexico to Antonito Colorado (64 miles), chugging you up a steep four percent grade, then over the 10,015 foot Cumbres Pass, the highest altitude reached by rail in the US!  Along the way you cross the line dividing New Mexico and Colorado 11 times, ride over the 137 foot high Cascade Trestle, pass through tunnels, hug rock walls and cling to a narrow rim of cliffs that drop straight down to the 800 foot Toltec Gorge.  One hairpin curve bends back so tight it reminds you of a dog that chases its tail - and darned near connects!

Depending on the season, there are all kinds of wildlife to see...we only saw deer, and one neighboring passenger saw an elk.  However, we did experience "every season"!  Sun, rain and snow!  It didn't stop me from going outside to the open gondola car to take my photos, though, it just "shortened" my visits a bit!  It could get mighty cold out there once the train got going on it's straightaways!

About half way, the train stops in Osler, which is nothing more than a "train stop" where they feed everyone a fabulous full hot turkey or meat loaf dinner (all you can eat) with all the trimmings.  Then back on the train you go!  Once you get to Antonito, you have a few minutes to stretch your legs (buy a few souvenirs) and then board a very nice bus and be driven back (only an hour back!) to Chama.  By day's end, its about 8 hours.  You sleep well that night.

We've been on a number of train trips (and if you follow my blogs, you've read about them), but I have to say...this one was one of the very best... 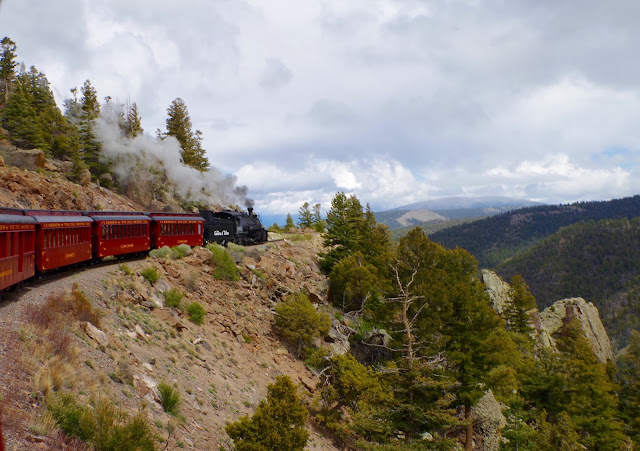 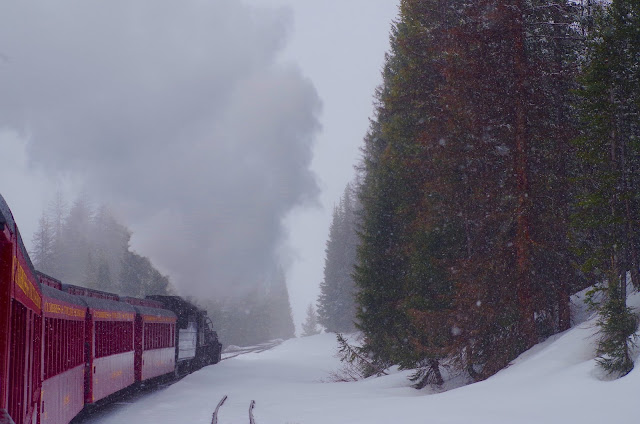 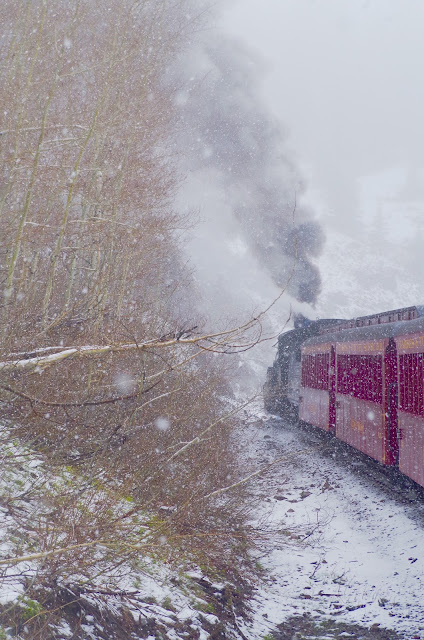 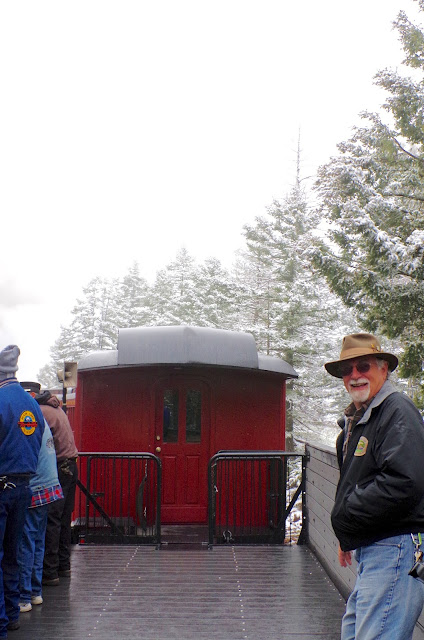 ...on the road in Colorado,  Marie