Exploring the coast ((The Golden Isles) of Georgia has been a dream of mine for over four years now.  Something has always come up to prevent it...hurricanes to COVID!  But I was determined that this was the year, so beginning in March, I started making campground reservations for the month of May!  Everything I had been reading said that restrictions were lessening with the virus but with that, campgrounds were getting more and more crowded and harder to get into!  What a dilemma...but I was steadfast and able to book us into four nights at each area I wanted all along the coast!

Our first stop, St Marys, at a beautiful campground, right on the edge of a little pond.  From here we would visit not only St Marys, but the northern areas of Amelia Island for their lighthouse and Ferandina Beach for Fort Clinch State Park for their Fort, and Big Talbot Island for their Boneyard Beach all in Florida (which is just across the border).

We started our adventures in St Marys.  Picking up some brochures we found out that there was a Submarine Museum downtown, so we stopped there first.  It was small, but informative.  Displays started with WWI and WWII memorabilia along with actual instrument panel and periscope to look through.  Upstairs was the current collection of nuclear submarine information.  Afterward we had a wonderful chat with Keith, the Director and a couple of other "sub guys" about their experiences and about the museum in Phoenix AZ that we should go see. 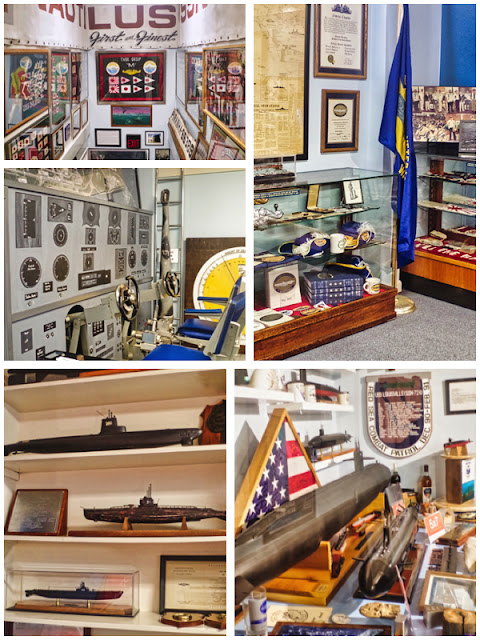 From there we drove around town with a map that showed us St Marys Historic Trees.  Live Oaks can live two to three hundred years and grow to be 60+ feet tall stretching branches up to 25+ feet.  Their Girth also can go 20+ feet wide as well...and the ones here were no exception!  Add the beauty of hanging moss and you've got a couple of "northerners" going "wow! a lot! 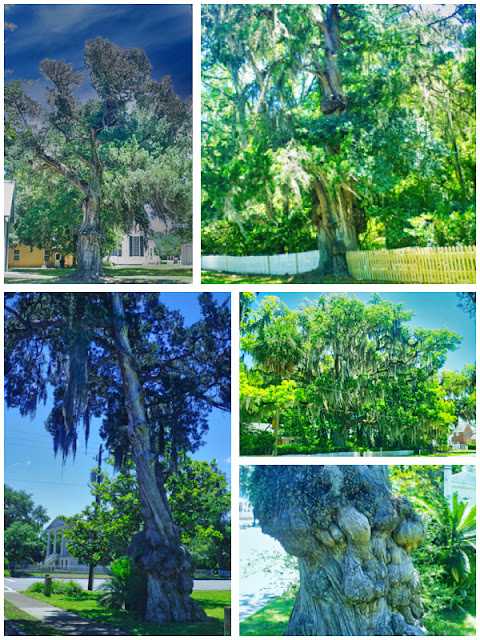 They also had on the list the first Pecan Trees planted around 1840 that started the first Georgia pecan orchard, which eventually produced large and heavy bearing nut trees.  Once reaching the peak of production trees, will bear fifty to one hundred pounds of nuts each year. 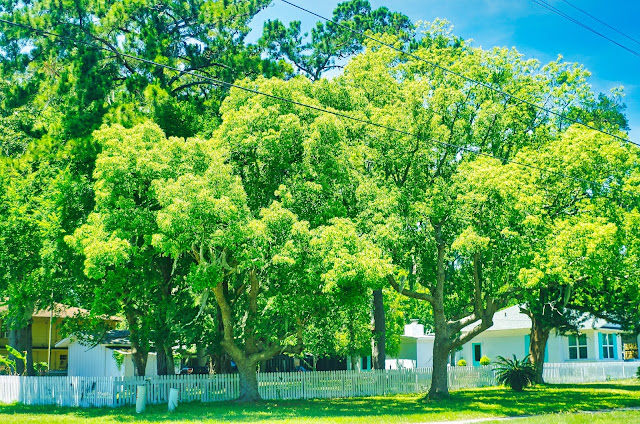 Our drive took us to the Oak Grove Cemetery, laid out in 1787-88. Along with early residents, Many descendants of Acadian refugees from Nova Scotia were relocated here.  Soldiers from the American Revolution, The war of 1812 and the Civil War, and all wars subsequent to these, rest quietly in this peaceful setting.   The tragedies of yellow fever epidemics, malaria and illnesses as yet unidentified brought many others to this final destination overlooking the St Marys River and the salt marshes of the coast.  I've shared before that I have a love of photographing cemeteries...there is something special about each one of them, an intimate time capsule of sorts.  A part of their past that they are sharing with us, today.  This was a lovely, well kept, well loved cemetery among the trees and flowers. 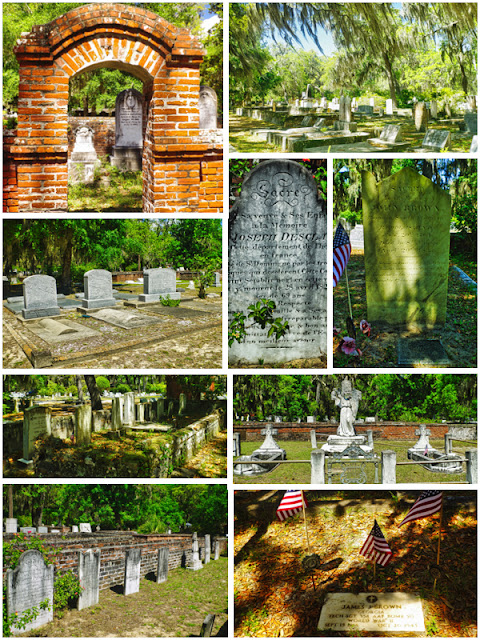 In the late 1820s John Houstoun McIntosh built The McIntosh Sugar works (made of tabby concrete).  After his death in 1836, it was sold and operated until after the Civil War.  During the war cane was planted and sugar was made and also used the tabby sugar works as a starch factory, producing arrowroot starch in large quantities.  Because of the type of material used to build it, (and that it changed names several times) it's now called the "Tabby Ruins".  The ruins are a fun photo stop and an interesting bit of history, that's for sure! 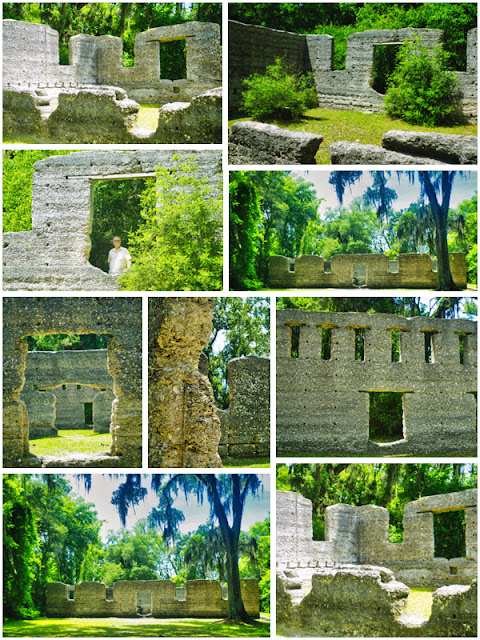 The following day was a trip south to Florida!  First, to see Amelia Lghthouse!  Well, THAT was a disappointment!   Seems it was closed, which I knew it was...but usually you can still "see" it...but NO, I guess they don't trust people, as they had a big ole gate across a long driveway, way down the street, so far down that you couldn't even see the lighthouse!  The best I could do, from a very far distance, was zoom in with my camera, the tip-top of it.  Bummer.  Selfish people. 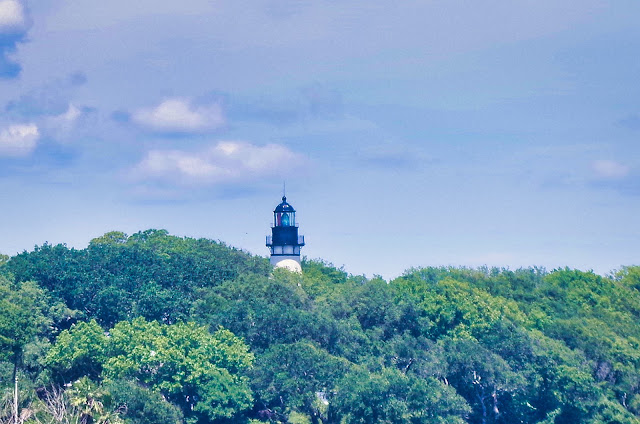 So, we went on to Fort Clinch State Park and visited the Fort.  Due to COVID, the reenactors weren't there to chat with, so we were on our own, but that was okay.  It was a small fort, not that much different than ones we've seen before.  Nice one for the soldiers at the time, it seemed. 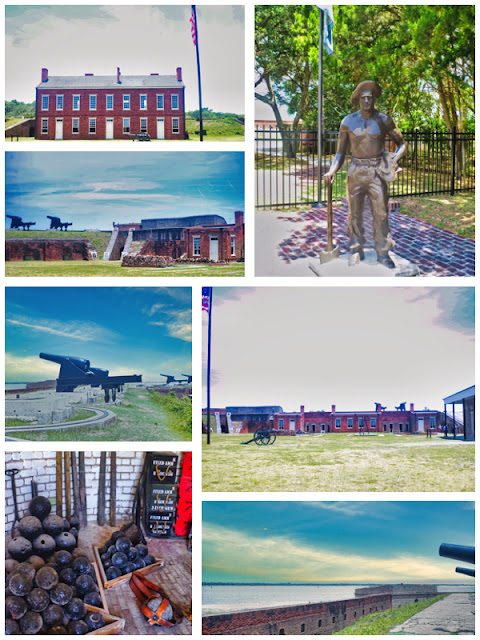 I actually found the drive in and out of the State Park more enjoyable than the Fort itself!  It had a "canopy drive" that had live oaks covered in moss hanging over the road all along the drive, really beautiful! 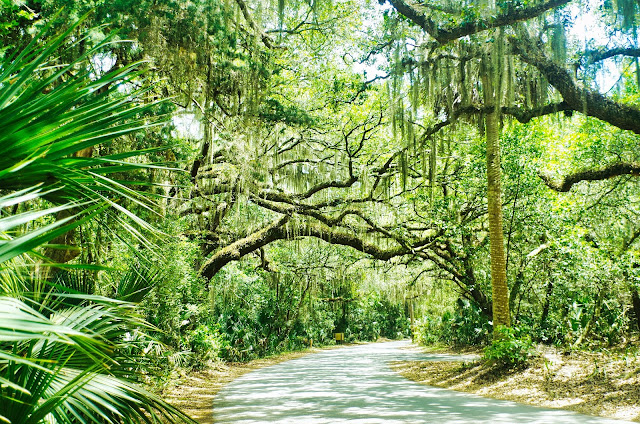 My favorite stop of the day was Boneyard Beach on Big Talbot Island!  I had been looking forward to this, and wasn't disappointed!  Wow, a photographer's dream...As the waters move around the barrier island, channels deepen, fill in and shift.  Relatively recently (within the past few hundred years), this has meant a swift retreat for the shoreline resulting in rapid tree fall. Their bones are bleached, smoothed and battered by sun, sand and wind. Trees of all shapes and sizes are strewn all along the beach for miles!  Beautiful driftwood everywhere, twisted, bleached, clean, just laying about on beautiful sand...no debris, no sea weed, no junk, etc.  pure beauty.  Of course I took way to many pictures! I finally told Jack to pull me away, or I would stay all day!  We left and found a fantastic restaurant and had a wonderful seafood lunch.  Could have stayed there all day too, just such a lovely way to spend the afternoon.. 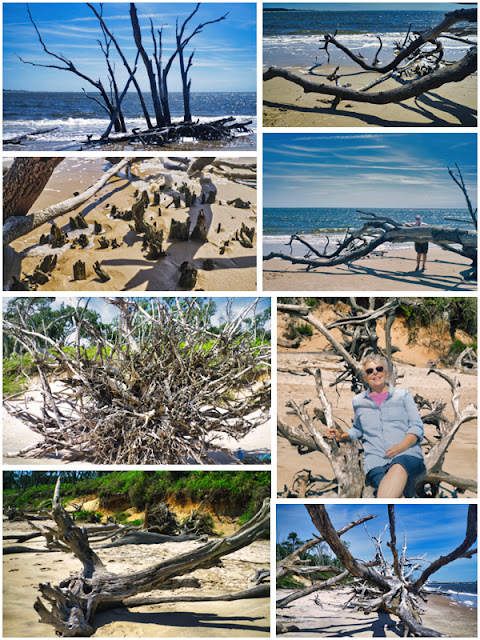 Our last day we took the Cumberland Queen Ferry over to spend the day on Cumberland Island.  Once again the weather was perfect!  You have to bring all your own food and beverages (carry in-carry-out), so we packed a picnic, camera and hats and off we went!  Lovely boat ride (45 min) and even saw a couple of playful dolphins!  I had heard that the island had feral horses and had hoped to see some...well, no worries there...they were everywhere, including at the dock!  The island is 18 miles long, I'd say (about the size of Catalina, if you've been there.  If you are (younger and healthier than us) you could hike it in a full day, but not us, we kept to the south end pretty much.  You can also camp there, and a number of young folks were doing that (bringing all that gear with them!).  They did have a number of picnic tables, restrooms and water fountains spread out around the island, which was great...and needed because you do a LOT of walking - even us, who are "out of shape and older" ended up walking more than 4 miles that day.  The "big thing" to see at the south end is the ruins of the Dungeness estate completed in 1885 by Thomas and Lucy Carnegie.  There are also a few shadows lingering from the earlier buildings built by Catharine Greene, wife of Revolutionary War hero Nathanael Greene and her second husband Phineas Miller.  Their graves are in the cemetery nearby.

Along the edges of the island it has vast undeveloped beaches with sand dunes, sometimes as high as 40 feet.  They have a variety of birds that we could hear their song as we walked and I caught an osprey protecting her nest high up on the chimney.  Wild turkeys crossed our path, as well as a sweet deer took a quick peek at us as it munched on it's lunch.  The feral horses were everywhere, and as long as you didn't bother them, they didn't bother you.  The rangers warned us it was springtime and new foals were about, and parents were being protective, so give them space...they were known to bite and kick...so we did!

The estate was massive in it's day, not only the mansion itself with over 50 rooms, but with a staff of over 300, they also needed housing.  As her nine children grew, they built houses on the property.  She had a pool, a "Recreation Building" that included a spa along with billiards, game tables, etc., a very large garden that would supply their food, cattle, sheep, etc. that would also supply that food source.  In other words, except for a few supplies, they were pretty self sustainable.  People came over by boat, were greeted by horse and buggy (later by car) and entertained elegantly, as only the Carnegie's could afford to do!

The last time Dungeness was used was for the 1929 wedding of a Carnegie daughter.  After the crash and the Great Depression, the family left the island and kept the mansion vacant.  It burned in a 1959 fire, believed to have been started by a poacher who had been shot in the leg by a caretaker weeks before. 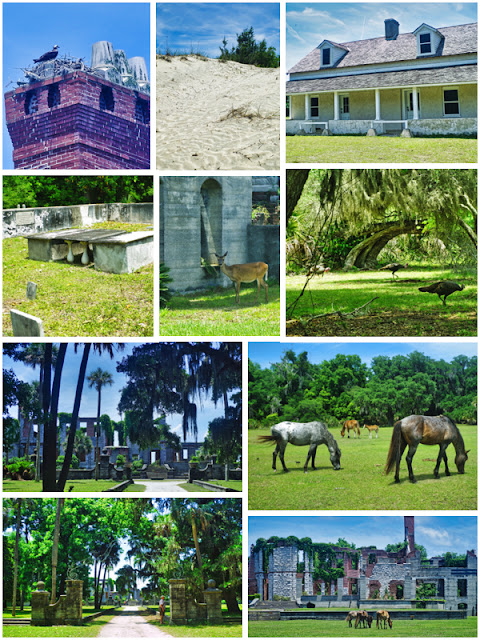 We are off to Brunswick Ga for the next four days...not that far, but many more adventures to seek out!  We will take a "day break" to relocate, and for Jack to rub the soreness out of his calves for more walking!