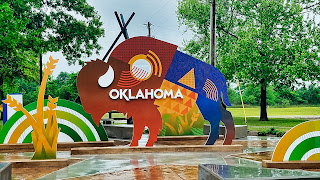 Well we are back in one of our favorite cities, Oklahoma City!  There is always so much to see here, that we always find something new to go and find out about.  With a "list" in hand, we started out easy and headed out downtown to check out the area, see some art and then go celebrate my birthday at one of my most favorite restaurants, the Cattleman's Steakhouse (yum!).

First stop, an area they call "Plaza Walls".  Seems like more and more cities are getting into mural painting.  I guess they figured out that if you encourage the local artist, give them areas to paint, they won't graffiti your city in the areas you don't want them to!  Smart.  This area was mostly all down a back street, all along a fence and the opposite wall and then into a small eating area.  Like other places, some very good art, along with some quirky pieces.  One thing I noticed here in Oklahoma City, is a lot of murals done under bridges and along the over-under passes.  Some pieces here are HUGE too, taking up the side of whole apartment buildings...just amazing pieces. 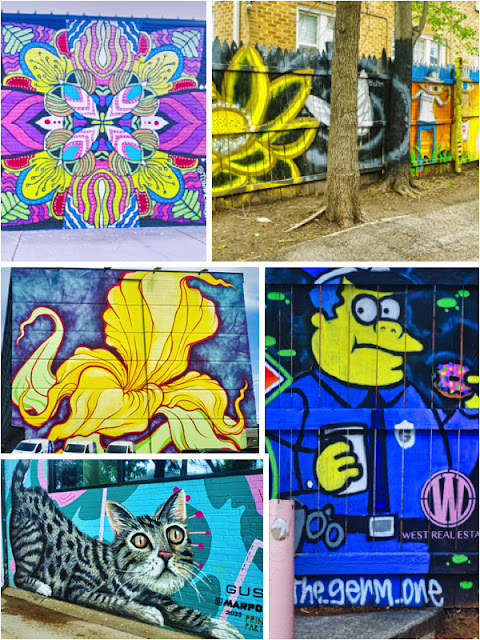 They also pay homage to their Route 66 strip, and have some historic pieces still left from "the day".  I couldn't pass that up!  So here are some nostalgic pictures of those! 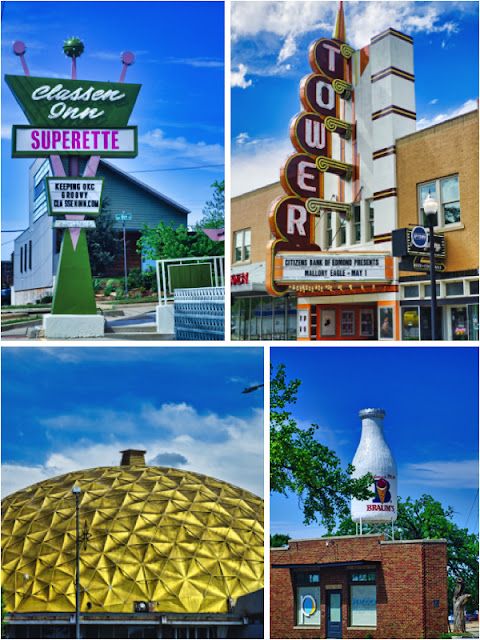 Then it was dinner time!  The Cattleman's is always busy, but we got right in and Charles, our waiter treated us like royalty.  I always order the T Bone as I feel it has the most flavor.  Here, it's so tender you could cut it with a fork, and large enough for two nights (lucky me!).  Afterward, Charles "gifted" me with a generous slice of their signature coconut cream pie to take home!  (I'm still working on it!) 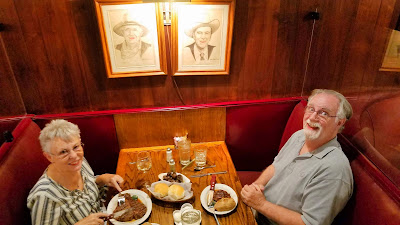 The next day we headed out first to the American Banjo Museum.  Wow, who knew there were so many different kinds of banjos?  The museum documents this colorful evolution, presenting every musical style and chapter associated with banjo history - from its roots in American slavery to its mainstream heyday of the Roaring 20s to its most recent voice in bluegrass, folk and world music.  As you entered, they had a delightful diorama with an old man and boy, with him showing the boy what a banjo was and how to play it, while sitting on the porch of a cabin. Very nice.  From there they had pictures with the history of the banjo then that led you into the displays of the banjos themselves.  The oldest being from the 1840s.  As time went on, they got fancier and fancier and "show" banjos really got fancier - wow!  Gold, with inlaid work on the back as well as up the neck and all around the edges - real works of art.

Of course the had "famous" entertainers banjos donated too, like Steve Martin, Dolly Pardon, Roy Atkins, and of course Earl Scruggs...but did you know that little Shirley Temple played one too?  ;-) And Elvis?

Anyway, it was very entertaining and educational.  The museum collection contains more than 400 instruments, and its the largest collection of banjos on public display in the world.  They even had an area where you could handle a couple different styles and use a computer lesson to show you how to learn a few chords!  Pretty cool, I'd say!  One never knows, maybe there's a hidden banjo player deep inside, just waiting to come out! 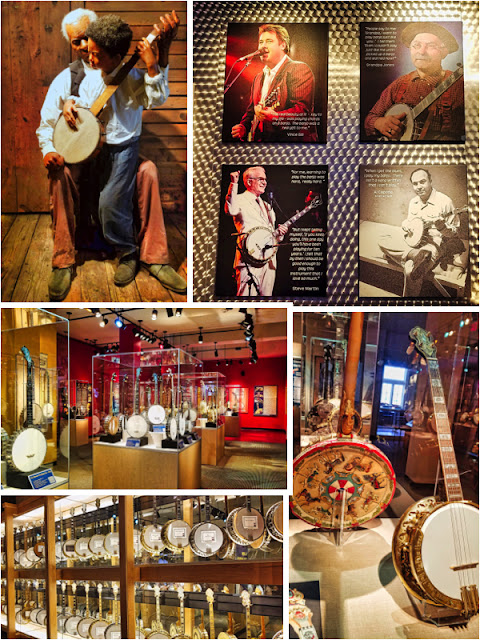 Afterward, we drove over to the 99s Museum.  Now this one I was anxious to go see, as I had read a couple of books about these women.  The "99s" were formed back in 1929 by a group of women pilots.  There were 99 of them, hence the name.  It was at a time when they pretty much had to learn by the seat of their pants, against all the odds, with the worst of the planes, conditions, circumstances, (no) uniforms, etc. In spite of everything, they learned, flew and grew.  They showed the world that "a woman can do what a man can do!".

The museum did a nice job of displaying artifacts from their heyday along with pictures of many of the original pilots from the group.  They really got noticed when they flew in what was referred to as "The Powder Puff Derby" - a cross country flight from Santa Monica CA to Cleveland Ohio. Nineteen started, and 15 finished 9 days later. It made history. No, Amelia Earhart was not the winner, a woman named Louise Thaden won. ;-)  It was after that race Amelia and others brought the group together to start the club. 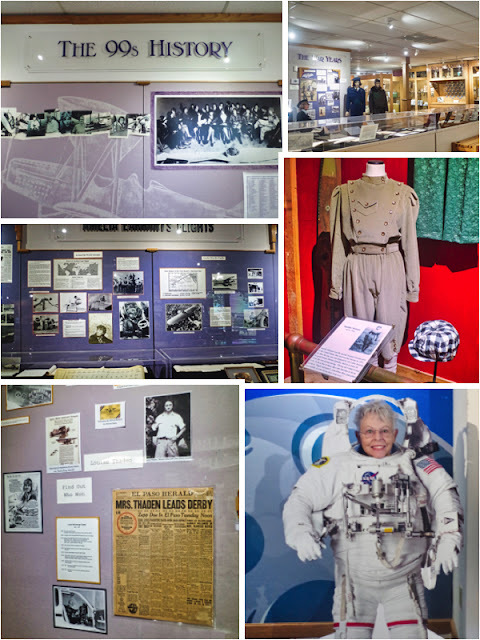 The museum also showcased women pilots through the years, all the way to today into space.  It sure would be a great place to take your daughters and granddaughters...show them the fortitude and possibilities are all around them!  Great place for inspiration!

The change in weather (Arizona's 85-90's to Texas' 65, rain & hail), gave me the gift of a cold.  Not to bad of one, but enough that I don't want to make it worse or pass it along to others, so I have been hunkering down in the RV for the last couple of days.  Tomorrow we move over to a sweet friend's home here in the city and visit with her for another few days before heading on to Louisiana.  Who know what we will get ourselves into!  ;-)

...kicking back in Oklahoma,  Marie