The Golden Isle of Georgia...Part 2 - St. Simons and Jekyll Island

The "second half" of our coastal journey lead us to the areas of Brunswick, St. Simons Island and Jekyll Island Georgia.  Our good luck continued and we had great weather, so our first visit was off to Jekyll Island to see Driftwood Beach!

Like Boneyard Beach in Florida, it is strewn with fallen trees, but I felt these were more "artistic" in nature.  Their simplistic, clean lines, along with some sea crustaceans here and there, gave them more character, I thought   either way, the beach was beautiful... 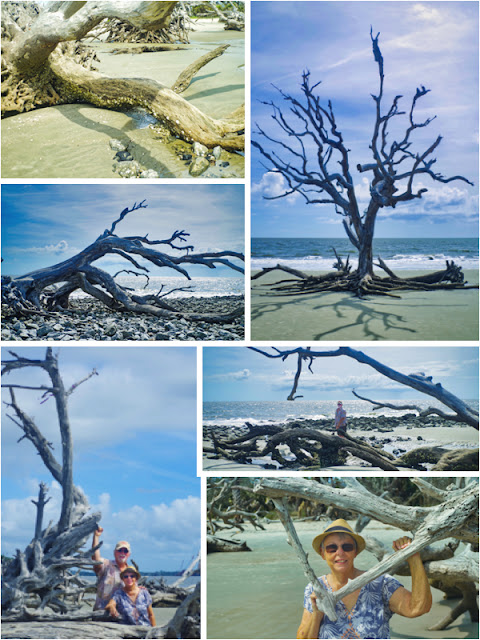 Jekyll Island has an interesting history. In 1733 General James Oglethorpe founded the colony of Georgia and named Jekyll Island in honor of Sir Joseph Jekyll, his friend and financier from England.  By 1736 English, Spanish, and Creek Indians met on the island in an effort to settle their differences through diplomacy.  In 1792 Fleeing the French Revolution, Christophe DuBignon purchased property on Jekyll Island.  But, the big change came in 1892 when Newton Finney, and brother-in-law, John Eugene DuBignon, a descendant of Christophe DuBignon, collaborate to turn Jekyll Island into a private hunting club for the nation’s wealthiest individuals, quickly becoming their winter hideaway.  By 1886 the Island was purchased by the newly formed Jekyll Island Club which Munsey’s Magazine called, “the richest, the most exclusive, the most inaccessible club in the world.”  The Club officially opened its doors in January 1888, quickly becoming a retreat for families that represented one-sixth of the world's wealth.

The Jekyll Island Club flourished throughout the 1930s, but world events took their toll. The Great Depression changed people’s priorities, and half of the Club’s membership dropped away. The final blow was World War II when the government ordered an evacuation of the Island due to the threat of enemy submarines off the coast.  The state of Georgia purchased Jekyll Island from the Jekyll Island Club for $675,000. The Island opened to the public as a State Park in 1948.

All this is important because The Club and the Cottages is what IS Jekyll Island, really!  Because parking was difficult and the history was "important", we decided to take the Trolley Tour here.  For an hour, they take you all around and explain all this and show you the various Cottages (who built what and why) and then they took us into William and Almira Rockefeller's Cottage called Indian Mound (when your rich, you name your home). 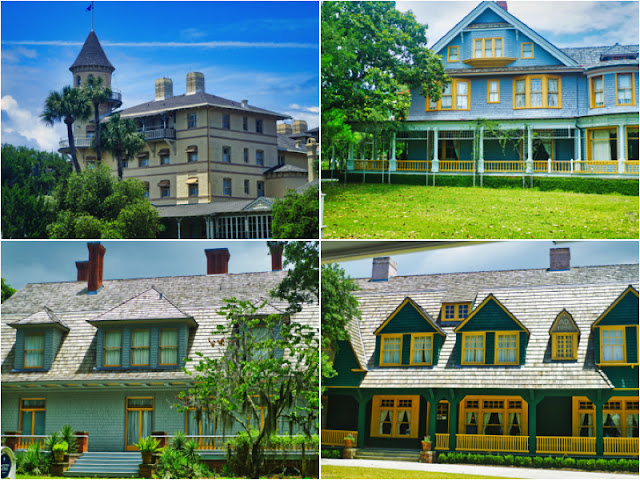 We stopped afterward and had lunch at "The Club" which is now a hotel.  Then went on to see Faith Chapel.

This small wooden church was built for interdenominational worship by the wealthy and powerful members of the Jekyll Island Club in 1904.  At the west end of the chapel is a magnificent, signed example of the work of Louis Comfort Tiffany (his signature is in the lower right hand corner.). This window was installed by the Jekyll Island Club and dedicated in 1921 to Frederick Gilbert Bourne, who had served as the club's fourth president. 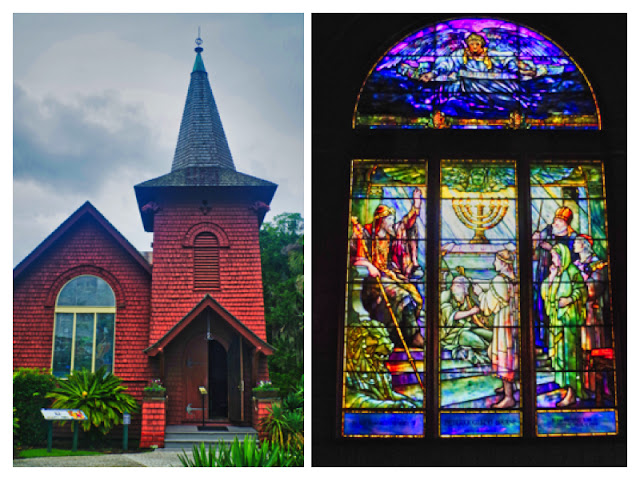 Next, it was time to go see the turtles!  Jekyll Island is home to the Georgia Sea Turtle Center. It is a turtle rehabilitation, research, and education facility, providing state-of-the-art emergency care to sick and injured sea turtles.   It's small but mighty!  They had a variety of gallery exhibits educating the ways sea turtles live, can be harmed (both by nature and mankind) their breeding habits, etc.  They had a window to the hospital to watch while the vets worked and tanks outside where the current "patients" are being cared for.  Several different sea turtles were there being treated for everything from malnutrition to shell injury.  I have a special love of turtles, especially sea turtles, so this was a treat for me! 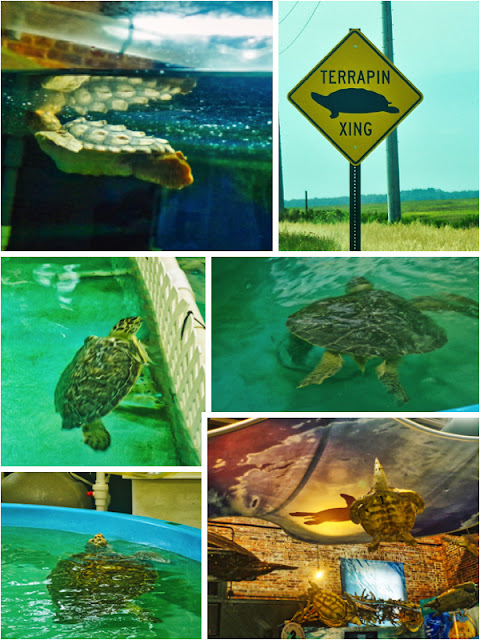 One last stop on the way off was the remains of the home of Maj. William Horton.  The first resident of Jekyll Island in 1736.  His home was a "Tabby" house (so much of it still remains). He was part of Oglethorpe's regiment. 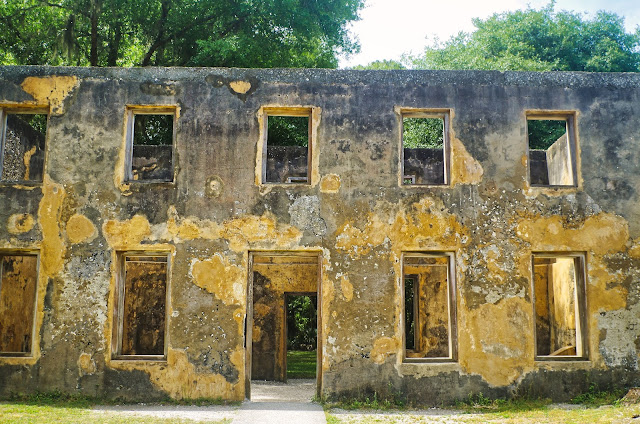 The following day was to over the (very) high, beautiful bridge to St. Simons Island!  First things first...the lighthouse!

Built in 1872, it stood proud and tall for all to see (not hidden behind a long road and chained off!).  One could climb the 129 stairs if they wanted to (not this time, thank you).  I was just here to take pictures... 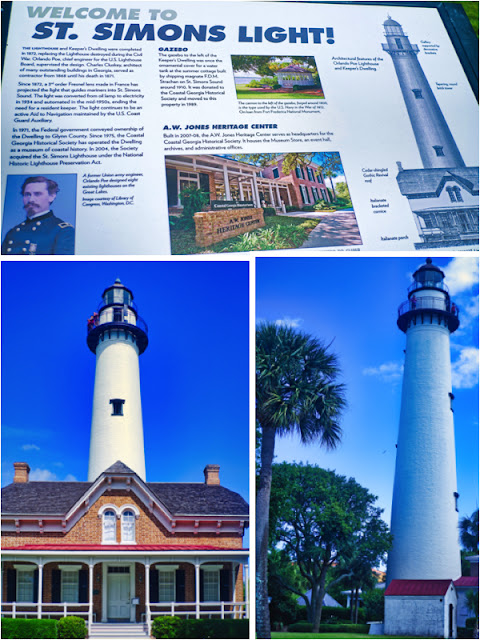 Down the ways a bit was Fort Frederica. In 1736, James Oglethorpe came to to protect the southern boundary of his new colony of Georgia from the Spanish in Florida.  Colonists from England, Scotland, and the Germanic states came to Georgia to support this endeavor.

Named for Frederick Louis, the Prince of Wales (1702-1754), Frederica was a military outpost consisting of a fort and town.  By 1743, nearly 1,000 people lived at Frederica. The town enjoyed a relative measure of prosperity owing to the crown's dispensation, but it was a prosperity that was built on military outlays. For Frederica, the peace treaty that Great Britain and Spain signed in 1748 sounded its death knell. No longer needed to guard against Spanish attack, the garrison was withdrawn and disbanded.

The effect was similar to base closings today. The local economy collapsed and as many as half the town's people left to seek their fortunes elsewhere. Those that remained continued to call Frederica home until 1758.  Very little remains today.  Archaeologists have been able to dig up some artifacts, and with old maps, and some ruins of some of the town's foundations, note who lived where.  The only remains of the fort is  a bit of the Magazine and a small section of the Barracks. 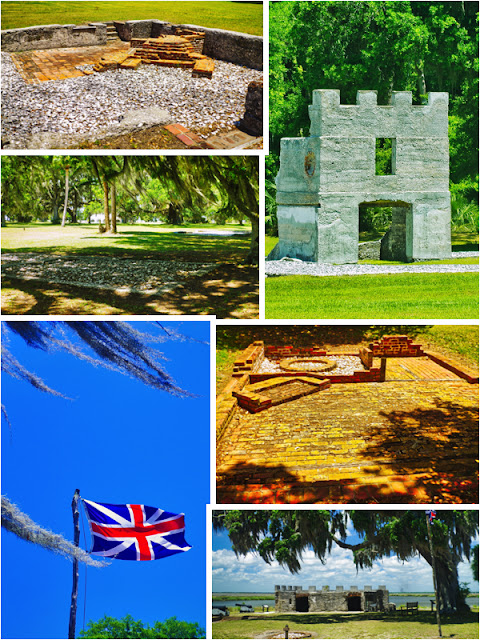 Afterward we drove on to see Christ Church, Frederica, built in 1736.  Christ Church is one of the oldest churches in Georgia and was founded on St. Simons Island nearly 70 years after the island was first settled by English colonists and set in tall, mossy grass under towering oak trees.  As I walked around the church, I found an old, lovely cemetery off to the side.  As I kept walking, I noticed it kept going, and going...all around to the back, much larger than I had suspected!  So peaceful, these sites under the massive trees and flowering bushes... 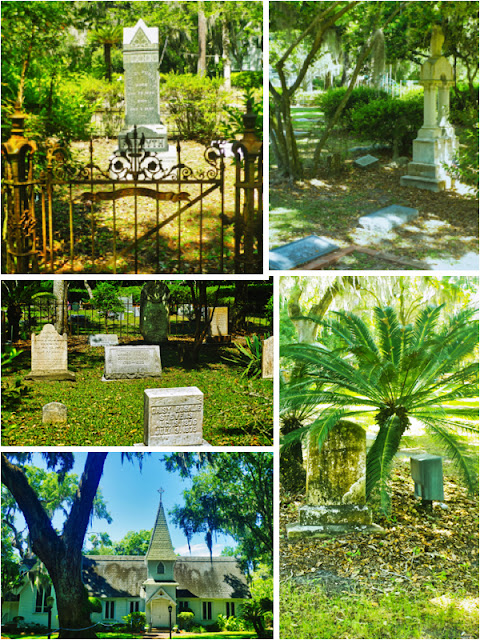 As we walked backed to the car, I noticed a path leading into the forest across the street, so I went to take a look.  A small sign read that it lead to the Wesley Memorial and Garden...so I followed it.  When we got there, a clearing had been made and a large (18') Celtic Cross had been erected with a plaque honoring the Reverends John and Charles Wesley.  The Wesley's had come over with Gen. Oglethorpe and founded the Methodist Church. The area was quite lovely with plants and flowers... 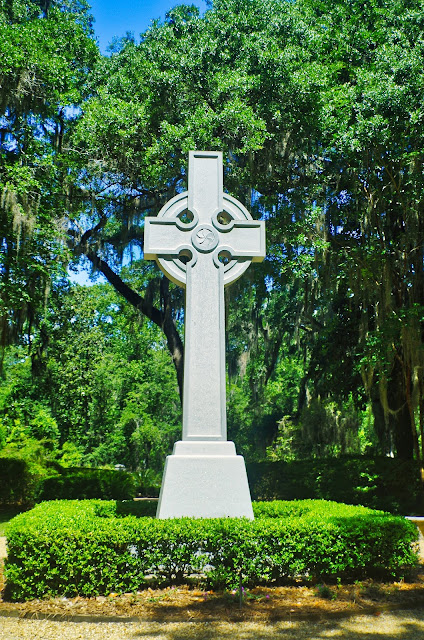 Our last drive was to see the Avenue of the Oaks.  T he area was known to house cotton and rice plantations from 1760 until the beginning of the Civil War. The Retreat Plantation was one of the most prosperous and was located on the southern tip of St. Simons Island. The Sea Island cotton grown at this antebellum plantation became famously known worldwide for its impressive quality.Anna Page King, who inherited the land in 1826, planted the famous Avenue of the Oaks. It is said that Anna grew such an abundance of flowers at Retreat Plantation that sailors nearing St. Simons Island could smell the flowers' fragrance before they saw the Island shores.

These 400 trees once led guests by buggy into her home, now a road drives around them (to narrow for cars) for viewing, and to enter a private golf course!  Still so beautiful after all these years!! 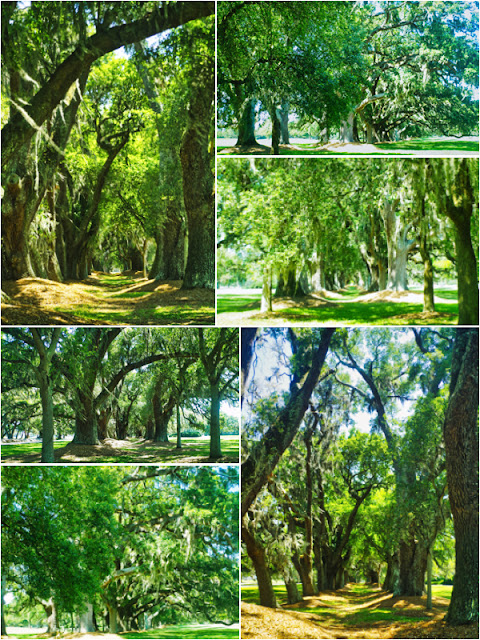 Our last little stop was to see one of several "tree spirits"!  Legend has it, the images immortalize the countless sailors who lost their lives at sea aboard the mighty sailing ships that were once made from St. Simons Island oak. Their sad, sorrowful expressions seem to reflect the grieving appearance of the trees themselves with their drooping branches and moss.  The mystifying mermaid named Cora has lived in the seas of the Golden Isles for centuries. Cora is the protector of the island's loggerhead turtles, so it was only appropriate that she be the one we sought...and what a beauty she was!  That was a great way to end our visit to the island!  ;-) 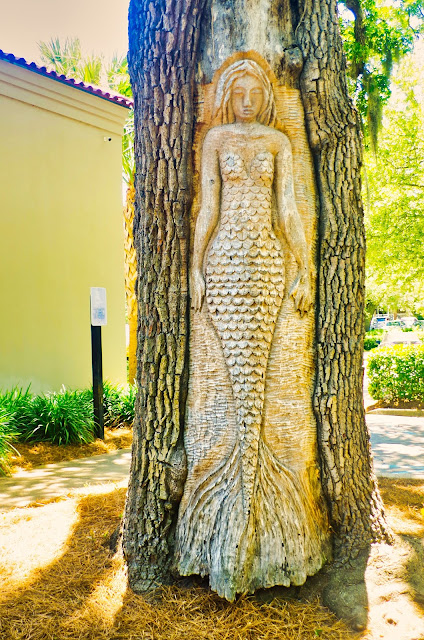 Well that did it for the "beaches"...for now, anyway!  We are off to Savannah for the next four days and that will conclude our excursion of Georgia!  I had looked so forward to this trip, and when one puts "high expectations" on something, it's always a gamble...well, this one paid off!  Everything I had hoped for was met...great weather, wonderful sights, beautiful fun beaches, good campgrounds, and even marvelous seafood!  It was to early for the famous Georgia peaches, but I knew that.  Such fun, now we shall see what the Carolina's will have for us!  ;-)