Our first RV Rally, a success!

Several months back, we had read about an RV Rally in March in Sarasota Florida, for all "Allegro Club" members. These are folks who own motorhomes built by Tiffin, of which ours is. The timing seemed perfect for us, so we signed up! We had heard from our "rv friends" that rallies were a lot of fun and educational - both of which we were up for!

March 1st finally got here, and we arrived in Sarasota just in the nick of time! The team of volunteers quickly lead each of us in and guided us into a parking spot, one next to another on a large grass field at the Sarasota Fairgrounds.

Once we settled in, off we went to get checked in and find out what's going on and where things were located! Badges around our necks, a bag of "goodies" and a schedule in our hands and we were off to check out the vendors! Well...that was a bit of a disappointment, for me, anyway. I had high hopes it would be a tent crammed full of all sorts of great things "I really needed!" But, instead, it was a few (maybe 15 or so?) vendors mostly selling things I pretty much knew I wasn't at all interested in.

First opportunity to meet anyone was at dinner. Gary and Ann were very nice. They had been "full-timer's" for the first 7 years, then bought a house, and now split their time between the house and the road about 60/40%. They were very encouraging, telling us how much we were going to love being on the road, and not to be surprised if at the end of the year, we just kept going, and going, and going!

The next day started off with donuts and coffee, 1500 donuts for 500 people! I believe they had a few left over ;-) They had about 30 brand new motorhomes there for us to check out and see all the new "bells & whistles" the 2012 models had to offer, and of course we could purchase any one, right then and there, we wish (and 20 were sold too!). The day was filled with seminars on everything from cooking to cleaning your rv.

Later in the day, we met our next door neighbors, Max and Martha, from Iowa. Great people, who we ended up spending the rest of the rally with. They have been rv'ing for over 20 years and helped us understand a few things about our rig, some helpful hints, places to visit and passed along some wonderful advise, one particular piece that I thought was most profound - Max said, "Don't drive to a destination, but drive instead with a direction in mind". He said that "if you drive to a destination, you are concentrating on 'getting there' and most likely are missing out on what's between here and there. But, if you drive in the 'direction' that you want to go, you are concentrating on everything you see while you are driving." I love that. I told him that we will keep that foremost and do our best to live by that rule.

The biggest change happened to the rig itself! One of the vendors was someone who makes and sells cleaning and polishing supplies for motorhomes (Wipe-Out). He was also offering (selling) to clean and polish on site. We signed up! We had been wanting to get the rig cleaned before we went to the rally, but ran out of time and had only given it a "quick once over". Besides all the dirt & bugs it had earned en route here, I don't believe it had ever been polished. It had been severely oxidized and I was afraid it would never be brought back to it's luster. The white looked and felt like chalk. He promised us his product would change all that! It did!! Two days his guys worked on it, and it now shines beautifully! Prettier than she's probably been in years! I'm really happy about that, I must confess. As we walked around the field, looking at all the other rigs, I felt like we were a dull pearl amongst diamonds, emeralds & rubies. Almost all the rigs were fairly new, meaning that they all were around the $250,000++ range. At least now our "pearl" is shiny and sparkles along side those other gems!

All in all the rally was fun. Great dinners and entertainment, enjoyable and educational seminars, and friendly people. Max shared that this was a "small" rally (500 ppl) and we should go to one of the Family Motor Coaching ones that are around twice the size. That's where I will find all the vendors I was looking for and far more seminars on subjects that would help us learn more on our rig & the "how to". I think we will add it to our "to do" list. 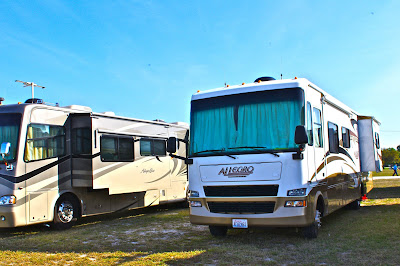 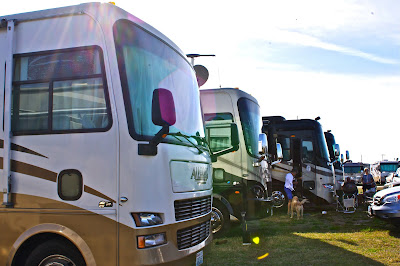 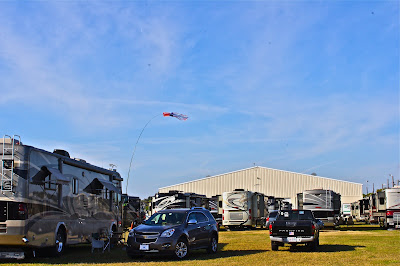 ...on the road in Florida, Marie