A Taste of Frankfort Kentucky...

Kentucky's not just about horses, it's about bourbon too! ...just ask any Kentuckian and they will be happy to tell you that the best bourbon whiskey comes from Kentucky!  Well, we couldn't pass up the opportunity to check that out, now could we?  Especially when not only when the "oldest continually operating distillery in the country", as well as the candy company that "started bourbon balls" is here!  ;-)

We started our day off with the candy company...Rebecca Ruth Candy & Museum.  Ruth & her friend Rebecca started the confection business in 1919.  The newly formed Rebecca Ruth Candies was an instant success with the help of J.J. King, the owner of the Frankfort Hotel. Closed by prohibition, the girls rented the barroom of the hotel and began dipping chocolates on "Edna's Table" (a beautiful granite tabletop that survived the hotel fire).  In 1929, Rebecca decided to get married and sell her portion of the business to Ruth.  She went through a number of setbacks, including prohibition, fire and WWII with the rationing of sugar and supplies...but she carried on.

The idea of mixing candy and bourbon together was accidentally suggested by a dignitary, Eleanor Hume Offutt, at Frankfort's sesquicentennial celebration in 1936. Ruth Booe worked on the recipe for two years before perfecting the still-secret process for blending bourbon and candy. In 1964, Ruth Booe retired, passing the business to her only son, John Booe. Ruth lived to the age of 82, passing away in 1973. In 1997, John sold the business to his son Charles Booe. John remained active in the business going in daily until November 2011. John Booe passed away on January 30, 2012. Charles Booe continues to run the family business today.

They give a nice little tour of the very small (house) tour where everything is still done by hand.  Of course we bought our share of candy, and left quite happy!  A wonderful way to start the day!  Yum! 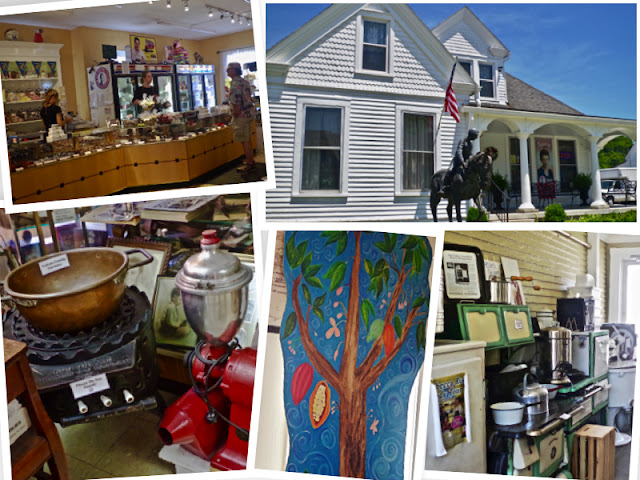 Not far from there is the Buffalo Trace Distillery.  Distilling started on the site that is now the Buffalo Trace Distillery in 1775 by Hancock Lee and his brother Willis Lee who died in 1776.  The oldest building on the site, the Riverside house, was constructed in 1792 by Commodore Richard Taylor and is still standing. The distillery changed hands a number of times, installing steam heating in the storage warehouses, becoming the first climate controlled warehouse for aging whiskey in the nation.  During prohibition the distillery was allowed to remain operational, in order to make whiskey for "medicinal purposes".

We took the "Trace Tour", as they have several types that you can make reservations for.  This one was for walk-ups, and all that we needed.  Fred was a great tour guide and took us on a walk-through of several warehouses, telling us about the processes of making the mash, showing us the various grains, then taking us into the aging warehouse to enjoy the smell and see some of the various barrels, and into the bottling room.  I was surprised how small it was and how much of it was done by hand!

Afterward...was the tasting!  We got to taste their vodka (yep, they make that too) and "white lightning" which is actually "moonshine" (I passed on that), and their Buffalo Trace Bourbon as well as their Thomas H Handy Sazerac Rye which is a single barrel Whisky (not to bad).  Then we got a taste of their Bourbon Cream which is like Bailey's (quite good!) and their root beer made by Dr. McGillicuddy's (which was great...and that's what we bought!). 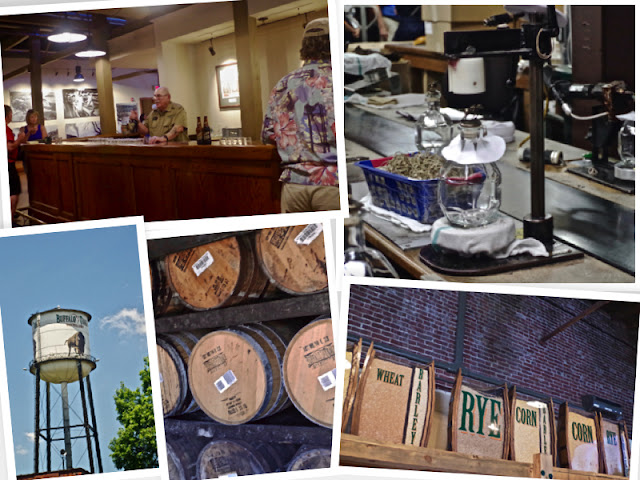 Frankfort has one "Covered Bridge" called the Switzer Covered Bridge, and it's on the National Historic Register.  I was excited to go out and see it.  It was built by a man named George Hockensmith in 1855 and is 126' long, 11' wide.  Due to a flood, it had to be rebuilt in 1998.  When we got there, we were shocked...it was covered in graffiti!  We've visited covered bridges all over the country and this is the very first one that has ever had any marks on it anywhere.  To see so many was a shock.  We spoke to a couple that was fishing nearby and they said that even the old bridge had been treated this way, sad.  They agreed, but it was just something the young people did.  ;-( 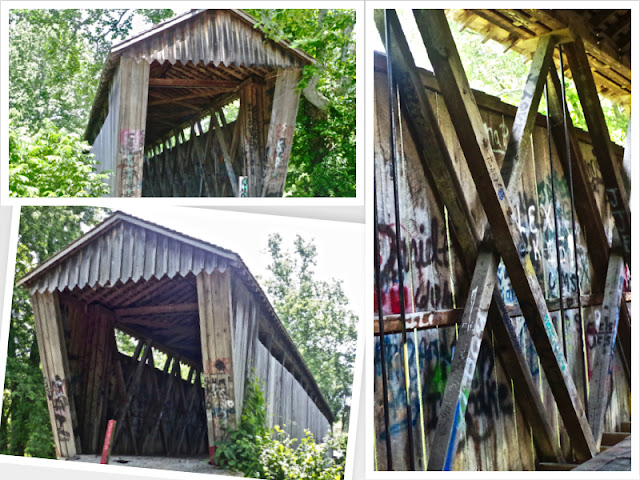 We left there and went to our final stop in Frankfort, the Josephine Sculpture Park.  This is a 20 acre park where over 40 sculptures and murals are scattered about that you can just wander around, touch as you want, and some even climb on!  It's a great place to bring kids and get them started on learning and loving art of all kinds!  They change the exhibits periodically and have events several times a year.  It was a fun place, and free!  It was a great place to end our stay... 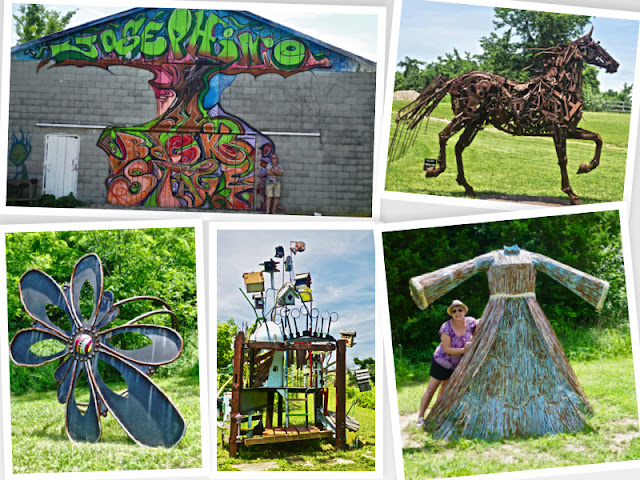