Our last stop before leaving the delightful state of Ohio was to spend a day in the Cuyahoga Valley National Park.  In order to do that, we moved a bit closer to it, and camped in Streetsboro Ohio.  We figured we only needed a day to do the whole park, so only booked two days there.

I had read an article that said, that if you liked the Great Smoky Mountains National Park, you would also like this one.  Well, I LOVED that park, so it was a no brainer to go here!  This article went on to share that what this park had over the Great Smokey's was less traffic (yea), but still "inspiring waterfalls, forests, hills, open farmlands, and the Cuyahoga River which played a role in the American history as the site of the Ohio & Erie Canal, which opened Ohio up to settlement in the early-to-mid 1800s.  Today, the Towpath Trail follows the route of the canal, winding through the valley past historical sites and verdant landscapes.  They offer a scenic railroad ride as well. 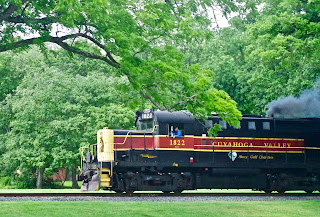 As much as we love taking those scenic railroads, looking at the map, we were afraid we would miss the opportunities to see and photograph the waterfalls and covered bridge and maybe even some other interesting places along the way, so we opted not to take the train this time and do the driving ourselves.  We did catch a glimpse of it as it went by once though and it was cool.  The weather was lovely and only sprinkled a couple of times, not enough to even matter.

I have to say...it was different.  I'm not used to towns and people's homes being inside a national park, that took some getting used to.  That said, the Brandywine Falls were indeed beautiful.  They must have had quite a bit of snow earlier, because the water sure was flowing!  The ranger "for-warned" us that it would be busy there, and "good luck finding a parking spot", but we didn't have a problem, so the article was right about "the crowds being less". 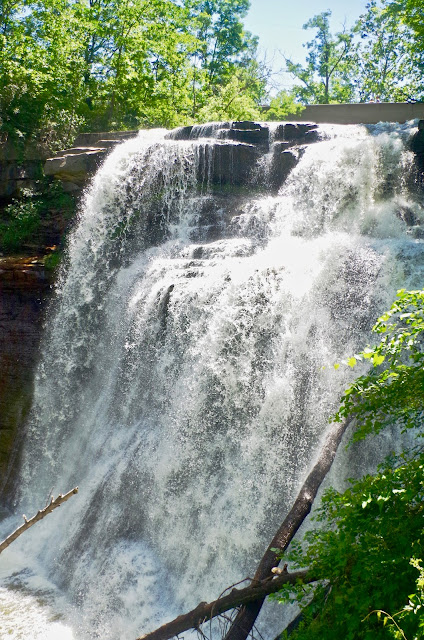 The Everett Covered Bridge was also quite nice and well preserved (no graffiti on this one!), even though they had to reconstruct it in 1986 due to an earlier flood. 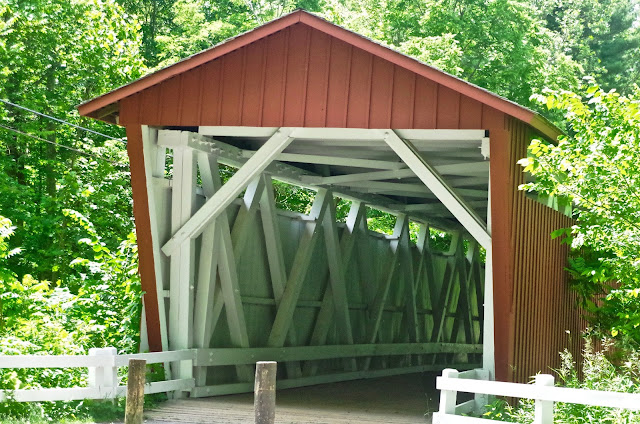 The map's "not to be missed" Tinkers Creek Gorge, clear at the other end of the park, turned out to be just a whole lot of trees...but I guess if you were there in the fall, it would have been much prettier... 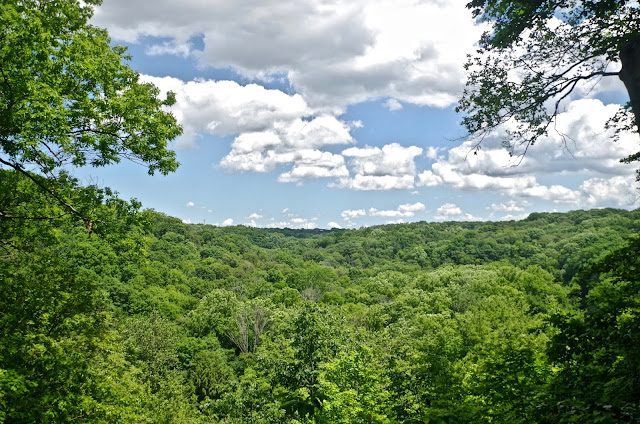 It was an enjoyable day...but to compare it to the Great Smoky Mountains I think was a bit of a marketing overstatement in my humble opinion.  Traffic or not, I'll take the Smokies any day of the week!

Jack is from Pennsylvania and he still has family here, so we try and visit at least every other year.  Somerset is the home of his cousin John and his wonderful family, and usually our first stop.

The boys' most favorite thing to do is to go target shooting, so they always set time aside to do that, and this trip was no exception!  ;-)  I'm fine with that, because it gives me "alone time", yea!  ;-) 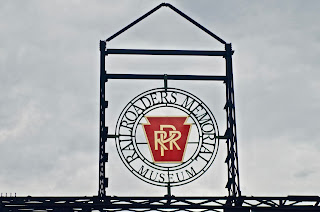 Then, when they are done with that, John always has wonderful places for us to explore...this time it was to the Railroaders Memorial Museum in Altoona.  It seems that back in the late 1800s & early 1900s, Altoona was the "railroad capitol".  6,000 Steam locomotives were built in Altoona alone with over 279,000 active employees at its height.  They were the only railroad that designed and built not only it's own locomotives, but each of its parts were designed, forged, hammered, molded and machined right there in their shops. 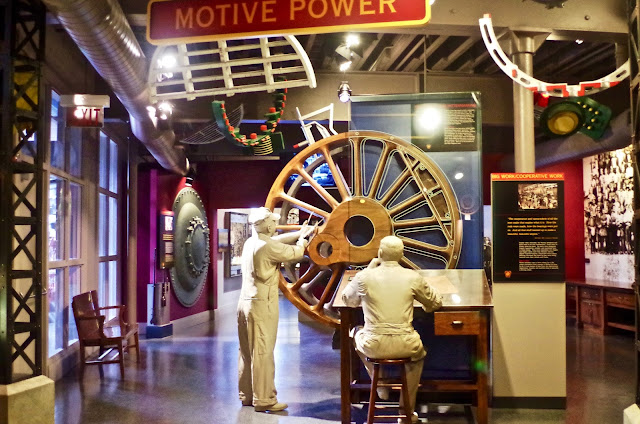 They also had their own Testing Laboratory where they tested everything from oranges to light bulbs to 270-ton locomotives.  They tested the oranges to see which ones gave the most juice for their breakfast service, the light bulbs on how long they lasted, etc.  They had a motto:  A penny saved times hundreds of thousands of units purchased was well more than a dollar earned. 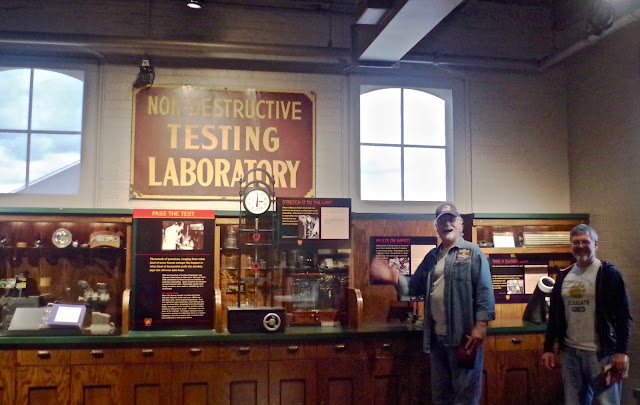 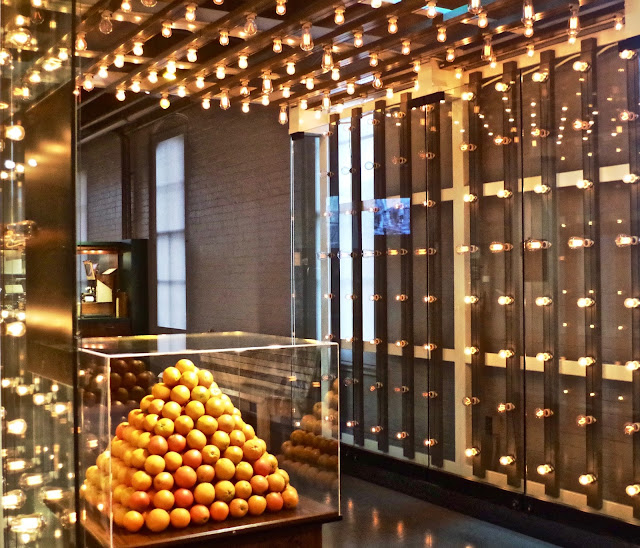 They took care of their own, creating whole towns, lending money to buy homes so they wouldn't have to use commercial banks, etc.  Because they had shifts that went around the clock, the town stayed open as well, 24 hours a day! 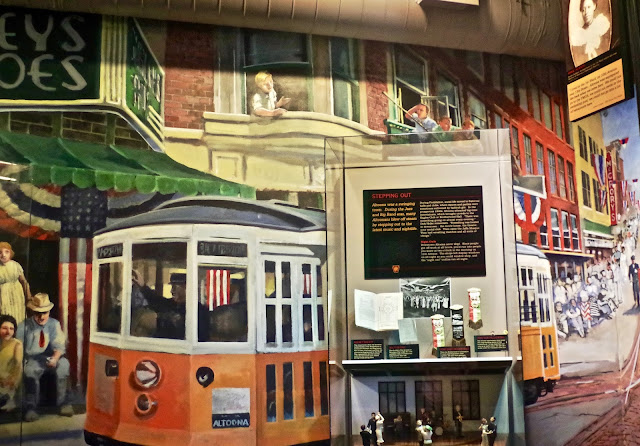 The museum was really done well, lots of charming vignettes with motion activated sensors that as you came near, statues would begin talking to you, or TVs would come on showing you a film about something.  Outside they had a full-size round-house and turntable with quite a number of old, still being worked on trains.  Everything from baggage cars to dining cars to even an old Conrail Cabin Car (caboose). 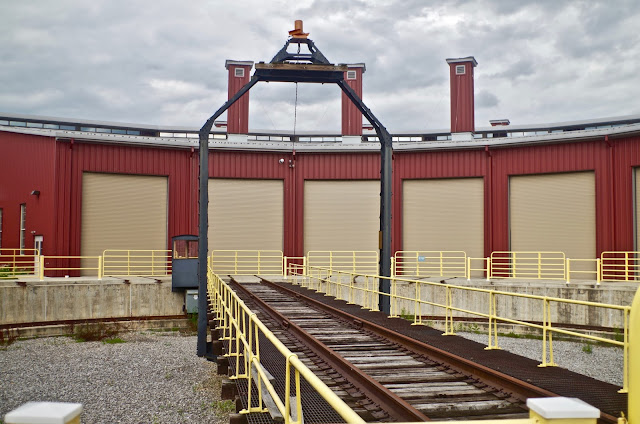 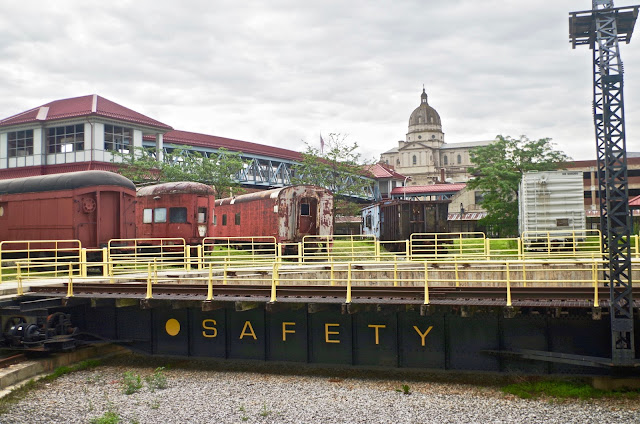 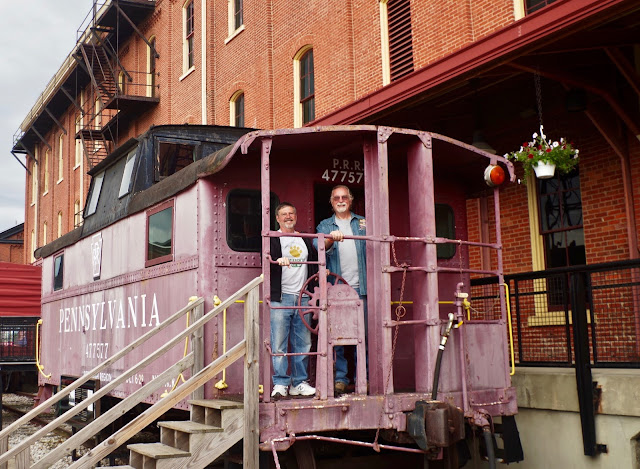 Included in your ticket was a visit to the Horseshoe Curve which opened in February of 1854.  We had visited it a couple of years ago and was quite impressed.  Before the Curve, passengers traveling from Philadelphia to Pittsburgh took about 20 days, after the completion of the addition of the Horseshoe Curve they could now travel the the entire route by rail and the time was reduced to an average of 15 hours. Pretty cool.

We lucked out, and our favorite blueberry farm opened up just before we were to leave Somerset, so we got to go berry picking just before we left!  Yea!  One of our most favorite things to do while we are here...nothing like fresh, just off the vine, blueberries!  Yum! 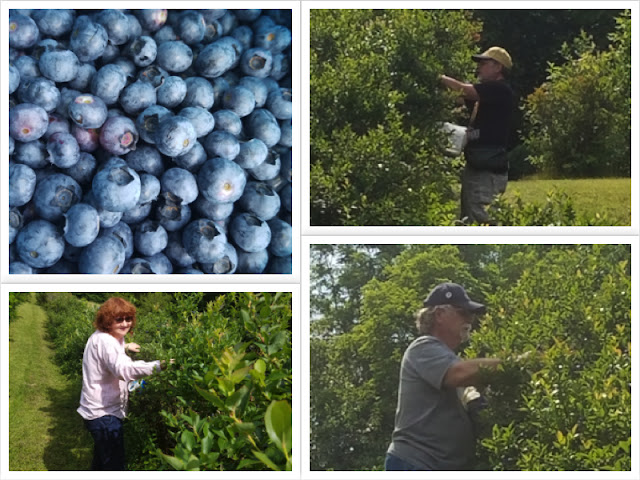 A great way to end our wonderful, yet to short visit with family...

...on the road in Pennsylvania,  Marie