When one thinks of Ohio, "lighthouses" are not the first thing that comes to mind, but there are actually a number of them here!  Ohio borders right up along lovely Lake Erie, the smallest by volume and warmest of the Great Lakes, and being so, the "most unpredictable and sometimes violently dangerous".  It has a large surface area (making it the 4th largest of the 5 Great Lakes that way) but it's quite shallow, only being 210 feet at it's deepest point.  Because of this, it's the warmest of the Great Lakes, but the first to freeze in the winter.

Fishing has always been a huge industry here, both sport and commercial.  The two most common are Walleye and Perch.  We can attest to their deliciousness as we had to try them when we arrived!  Yum!

When we toured the Maritime Museum of Sandusky we learned that in the 1900s they used to earn their living (at $2 for a 10 hour work day) by sawing blocks of ice out of the frozen lake.  We also learned that the fishermen were part of the "underground railroad" for the escaped slaves, taking them to Canada.  Interesting... 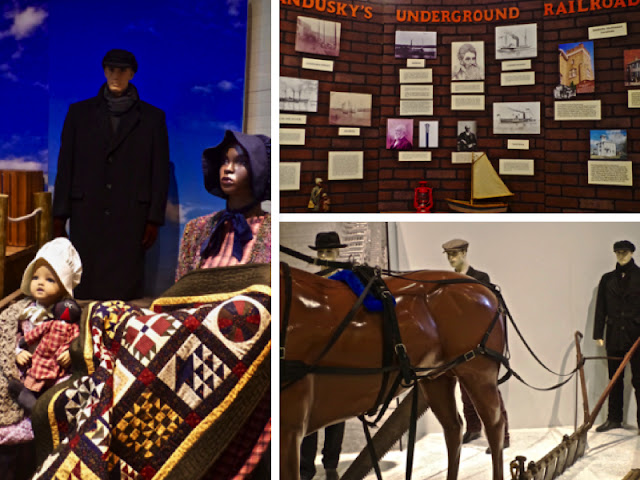 Back to the lighthouses...the Ohio communities along the lake have been diligent in saving these old lighthouses and in some cases, having to raise a great deal of money to repair and/or completely replicate them.  We spent a wonderful day driving through several towns tracking them down, literally as they don't always promote them as well as they should (not like Maine does!).  Not a single brochure on "all Ohio lighthouses" etc. and even when talking to the people in the area where one was, they rarely knew much about the others.  Here's what we found...

We spent a delightful afternoon enjoying the Merry-Go-Round Museum in Sandusky as well.  Actually, this was an "extra"...you see, just before we got here, as we were driving from Columbus to Sandusky, there is a Carousel Factory.  Jack had been calling them for a couple of days to see if they still gave tours, and couldn't get an answer.  I googled them and saw that they had a different number and called that.  I explained that we were "big fans" and were "en route, and wondered if, by any chance at all, would they give us a tour?"  I was put on hold for quite awhile, then a young woman came on line and asked if she could assist me, I again explained my hopes, and she asked "how many? & "when?"  She then agreed, and explained that they were working on a secret project and we wouldn't be able to take any pictures though.  I told her "no problem" and we were on our way!

She spent a wonderful hour with us, giving us a complete tour of their factory, every detail.  It was pretty much the worker's lunch time, but several stopped what they were doing to explain how wood was cut, glued, pieced together, etc.  She is a painter and showed us various pieces and techniques etc.  I can share a couple of pieces that they are working on (not the "secret" tho!), one is a restoration project from the turn of the century they are helping with from an east coast town, another is from a private collector of 1920s horses that he has his own carousel housed in a building he has and only lets family and close friends ride (he supplies sweat pants and shirts, so not to scratch them) and some special horses for the Royal Caribbean Cruise Line (the one picture I got to take).  Very, very cool tour! 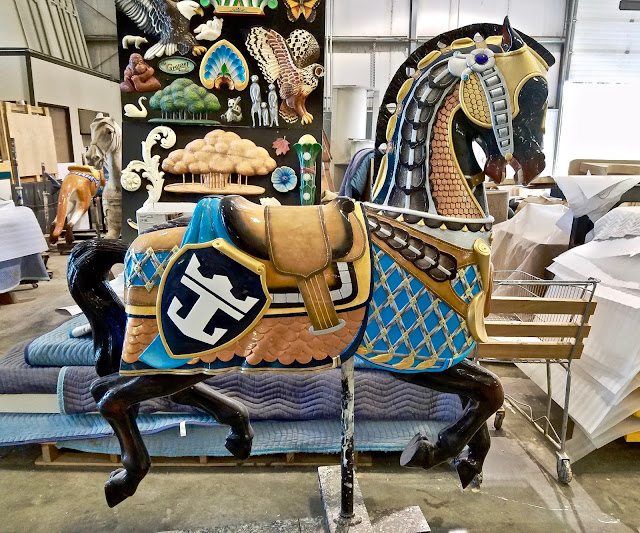 Ok, all that said, so we go to this museum in Sandusky, and while we are waiting to take the tour, we happen to mention that we had just visited the factory in Mansfield, and the ladies there went "your kidding?!"  They hardly ever do that!  There are some ladies on the tour before you that were just saying how they had just called and tried to do the tour, and were told 'no', you are so very lucky!"   Yup, we are!  Must be my charm!  ;-)

It made the tour here all that more interesting too...Lots of wonderful animals from the 1900s on, with lots of history about the various carvers and their styles.  Simple "traveling animals" that had carved tales vs real horse hair, to very fancy horses with jewels and intricate carvings called "Coney Island style".   We even bought a couple of raffle tickets to win one (a zebra) at the end of the year, wish us luck!  (don't ask me where we will put it tho!). 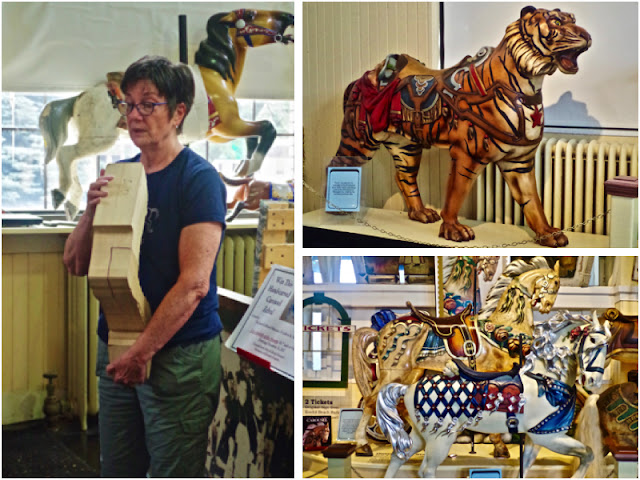 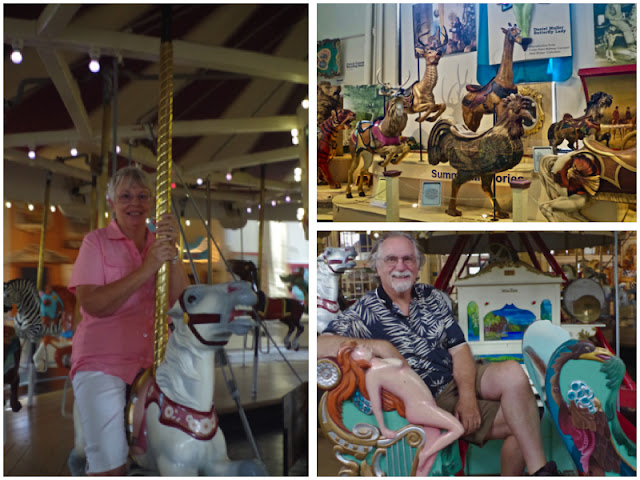 All this touring and scouring the lakeside left us hungry, so, of course we sought out a "local favorite"!  Turned out to be Toft's Dairy, Ohio's Oldest Dairy (& Ice Cream), open since 1900!  We were advised to get the "small", but "choose more than one flavor!"  So, I did...peach-raspberry & chocolate-raspberry!  Yum!  "Small" turned out to be enough for dinner though! 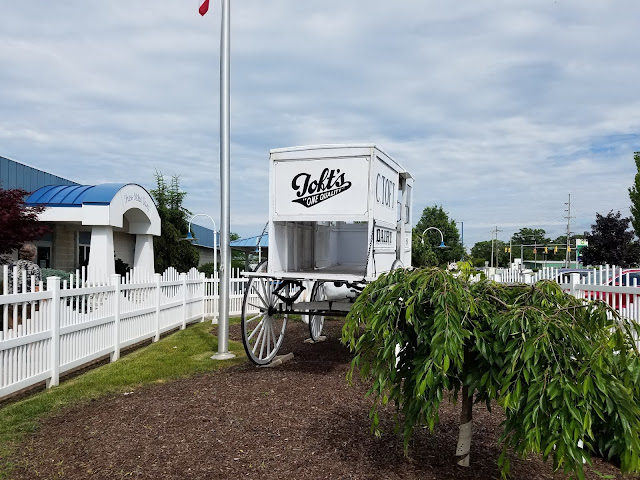 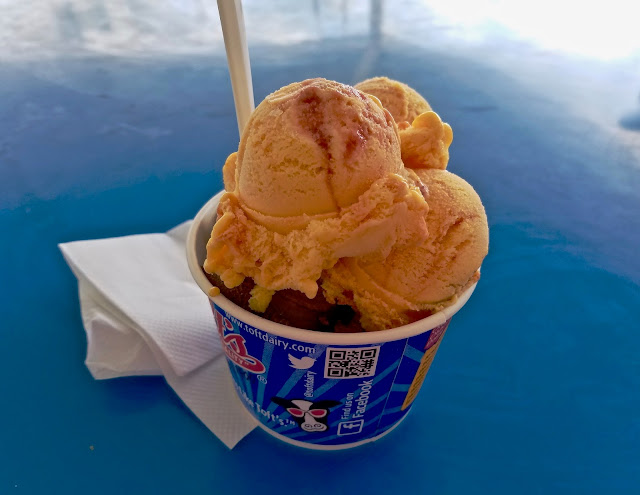 Great way to end our stay!  Tomorrow we are off to Cleveland!