Columbus was next on our list of cities to visit in Ohio, but first we wanted to "check out" how the legendary Airstream was made, and to do that, we needed to make an over-night stop at Jackson Center where they are made!  They have a little "terraport" that you can stay at (primarily set up for Airstreams going in for service, but they let "us" use it too!).  The tour is a little over an hour or so, depending on the size and questions and is done by walking through the plant, area by area.  Our guide was great...super informative and fun.  He even showed us two super-old ones - the Wally Stella Byam (c1957) 22' gold anodized aluminum Airstream and one from 1932 Torpedo Shape Airstream.  As usual, you couldn't take pictures inside, so we just had to enjoy it ourselves!  ;-)  Everything is done by hand...no robot assists at all.  They are super back-logged even though they employ 8,000 and could easily use twice as many!  (anyone want to move to Jackson Center Ohio, their hiring!)  It was a great tour, I'm glad we made the the stop. 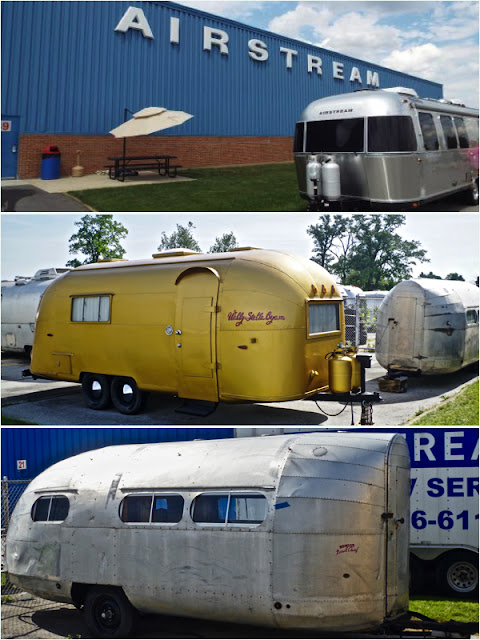 Our first stop in Columbus was to see the Capitol, here they call it The Ohio Statehouse.  It is a beautiful example of Greek Revival architecture, completed after 22 years in 1861.  The reason it took 22 years, is that it had a number of setbacks, some of which were money; in 1852  (13 years after work began) fire consumed the old two-story capitol building; a union dispute stopped work altogether because they were using prisoners instead of union workers; numerous design changes; a cholera epidemic outbreak, even a fight as to which city it should be located in.  After all that, in 1989 it had to be expanded and changed and offices even moved across the street (ie the Governor 's).  We had a great tour of the inside, learning all this. 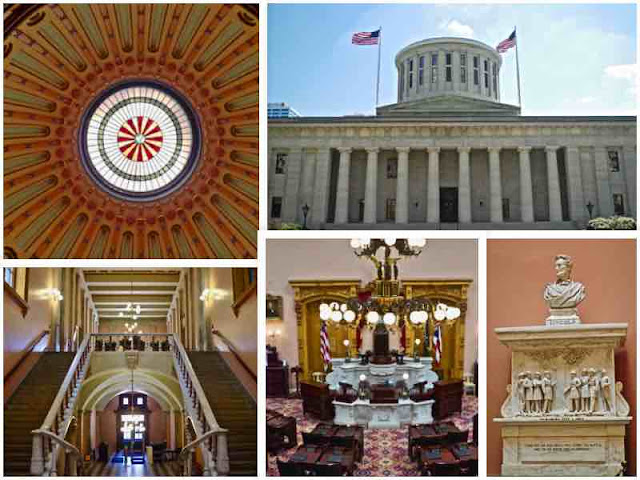 The outside of the Statehouse is almost more impressive with it's monuments and Veterans Plaza.  My two favorites were the McKinley Monument erected in 1906 to honor William McKinley former Ohio Governor and US president.  The statue of McKinley looks across the street toward what was once the Neil House, where McKinley and his wife lived while he was governor.  It is said that, Mrs. McKinley was bedridden and she would sit up at the window, and as he left each morning at 9am each day, he would stand at that spot and wave to his wife across the street.  He would do the same thing at exactly 3pm upon leaving the Statehouse, coming back to her.   Nice. 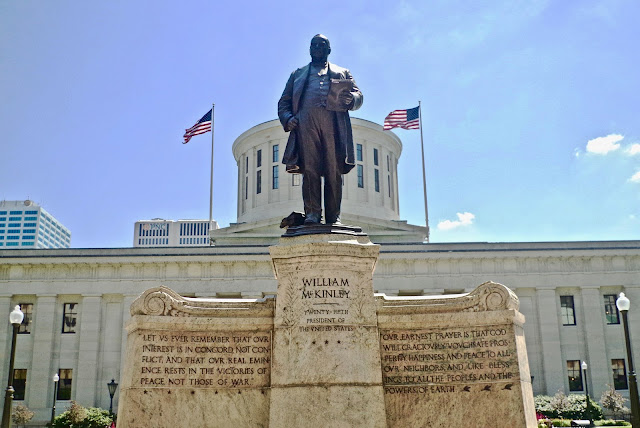 The other special spot is their Ohio Veterans Plaza.  We've seen a number of heart-felt memorials across the country, each different, each special.  This one had two large curved Columbus limestone walls engraved with letters sent to families, friends, and loved ones from members of the armed forces, some of whom never returned home.  Reading them, you couldn't help but bring tears to your eyes as if it were yesterday.  Very moving. 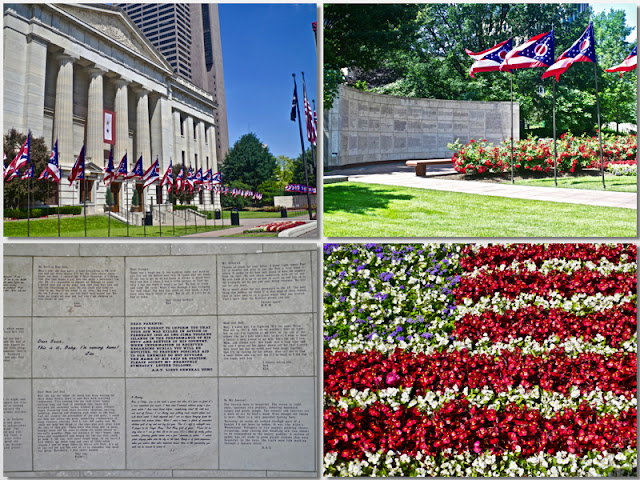 I always try and "check out" the governor's home when I visit the a capitol too, and usually they are fairly close by.  Well...this one sure wasn't!  It was over five miles away!  Of course it was one of those surrounded by a high gate and tall shrubs (some aren't), but I got a little peek anyway!  ;-)  It was all back, windy roads from his house to the Statehouse...must be a fun commute on "bad weather days"! 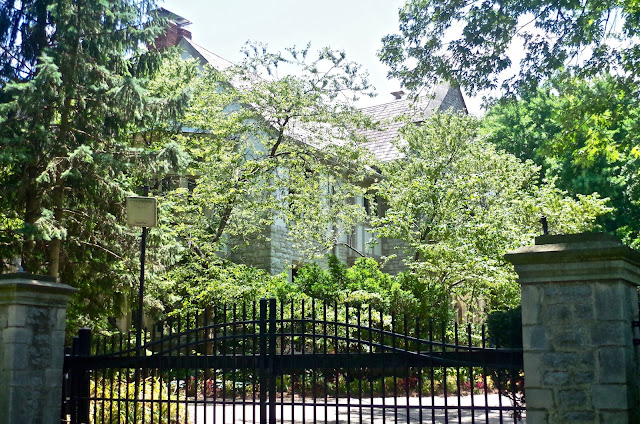 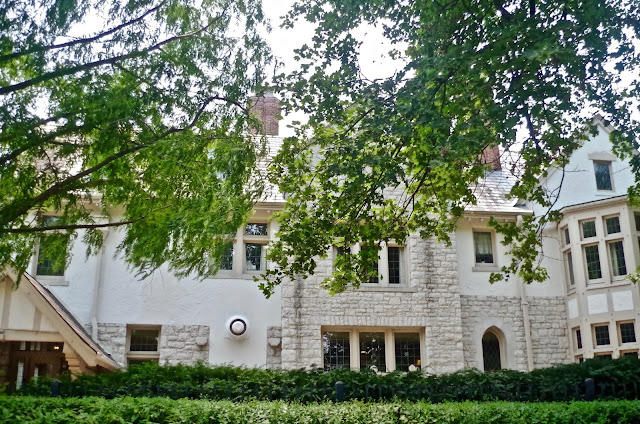 They have a charming little park here called Deaf School Park (c1834) the actual school was relocated in 1953, leaving this wonderful park behind where in 1989 they designed a Topiary Garden based on the the French artist Georges Seurat's famous painting "A Sunday Afternoon On The Ile De La Grande Jatte" (1884-1886).  It's quite large and intricate, and done very well.  Hard to capture all in photographs...but here's a sample... 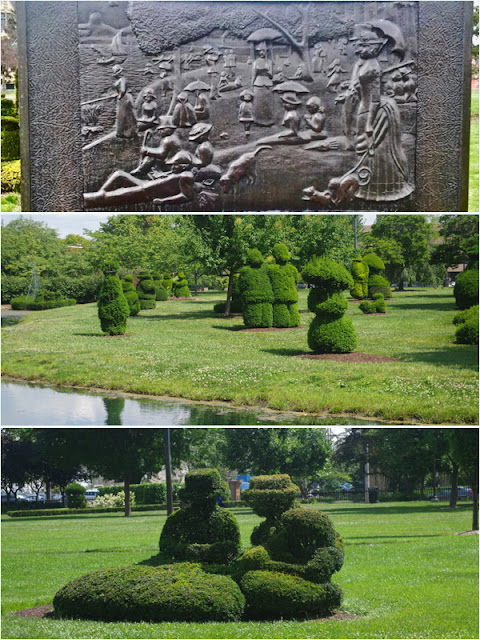 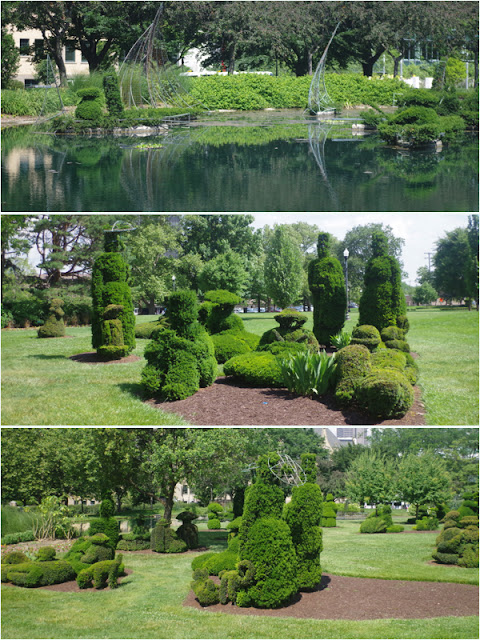 We read that Columbus had an "oddity" of sorts...a "tattooed Big Boy"!  Now that we had to go see!  We tracked that guy down and found him in a local bar/restaurant called Hadley's.  The place wasn't opened for business yet (not until 4pm) but Jack talked our way in) and I was allowed to take some pictures.  Seems they bought the boy on e bay and had a local talented tattoo artist paint him for them - she did a great job!  He proudly stands in their corner window!  Go Hadley's!  ;-) 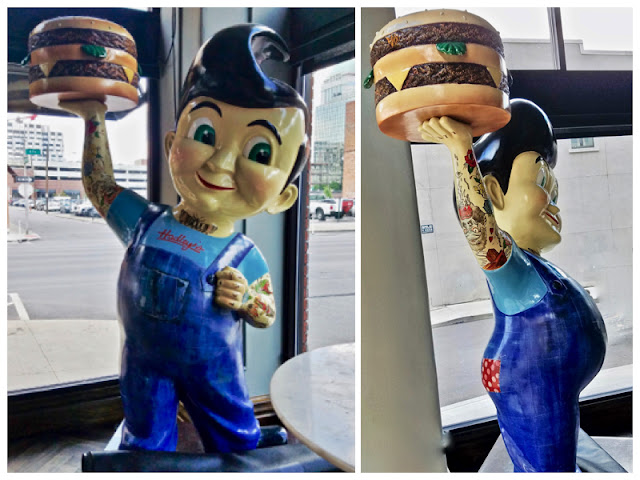 Our last adventure in Columbus was to visit the American Whistle Factory, where they are the ONLY makers of American whistles!  We were lucky enough to join in on a group to do the tour that takes about an hour.  It's a very small place, producing about a million whistles a year.  They do everything in house but the exterior coating because that involves large vats of chemicals.  Founded in 1956 as Colsoff Manufacturing and was purchased by the current owner in 1987.  Some fun facts...* whistles are most commonly plated with nickel gives rise to the common misconception that they are made of steel, when in fact they use brass because it offers the same tone and resonance qualities that make brass effective in musical instruments.  * It "plays" in F Sharp.  * The little "ball" inside used to be made of actual cork, but now they have found a synthetic cork that won't breakdown, so they use it instead...guess how it's inserted in the whistle?  (it's a little soft and has a "memory" so when it's squeezed through the hole, it goes back to it's full shape and won't slip back out again!).  Ahhh, it's the little things in life that are fun to learn, right?  ;-) 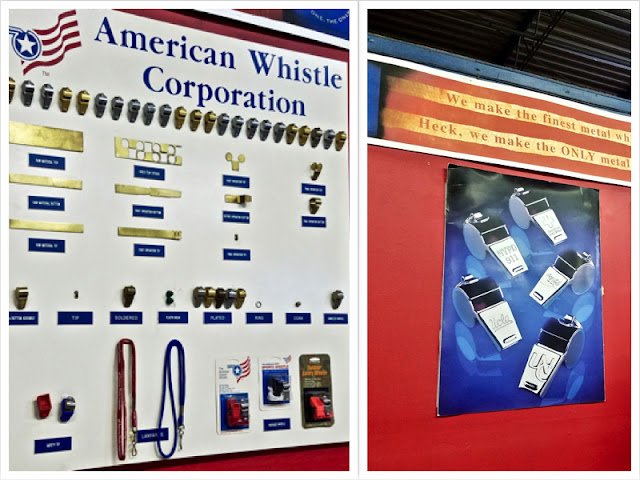 We say goodby to Columbus tomorrow as we head off to Sandusky and Lake Erie for more adventures in the grand state of Ohio!