Well, we finally made it, our 48th state, Ohio!  When we crossed over from Kentucky to Ohio, you didn't even notice it though...no "Welcome to Ohio" sign...nothing!  I was so disappointed.  I didn't expect a fan-fair, but I did expect something!  ;-(

Oh well, our first visit was to the city of Cincinnati.  Campgrounds are not in abundance there, but lucky for us, the FMCA home office is there, and they are wonderful enough to have a 15+ facility set up for members!  It's a great little place just outside the city so getting to the attractions isn't bad and it's just far enough that it's nice and quiet too.

We only had 3 days here, counting our arrival day, so once we arrived and set up, we headed right out.  With only half a day, we decided to check out the placed closest first.  I had read about the Historic Spring Grove Cemetery & Arboretum, being the 2nd largest cemetery in the US and recognized as a National Historic Landmark.  It dates back to 1855, with 733 acres, 400 of which are landscaped  with 12 ponds and several waterfalls.  Besides that, "Johnny Appleseed" is buried there!  Cool, huh?  So, off we went to check it out!

Well, what a place!  Wow, this is where the wealthy are!  Many of the mausoleums here were bigger than most peoples homes!  There wasn't a "simple" headstone to be found, everyone was huge, and/or elaborate.  My curiosity got to me and I had to look up who some of the largest ones belonged to, like the Dexter funerary monument, turned out he was a "whiskey baron".  Or, the Robinson's Mausoleum were a historic circus family.

The very first person buried here was Martha Ernst in 1845.  The rest of her family later joined her.  Theirs started out simple, then a "tree" was added (can't have just a simple grave marker here!). 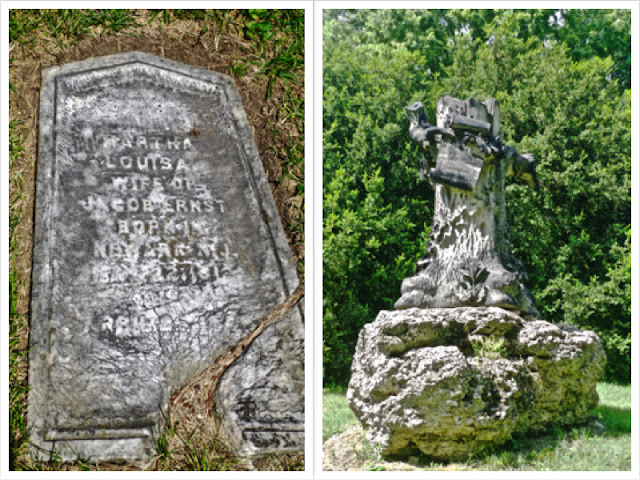 I think we all thought "Johnny Appleseed" was a just legend, or a nice story when we were young, but he was a real person.  His name was actually John Chapman and he really did go around planting apple seeds in the Ohio and Indiana frontier as a Missionary and a "lover of life".  He lived from 1774-1845. 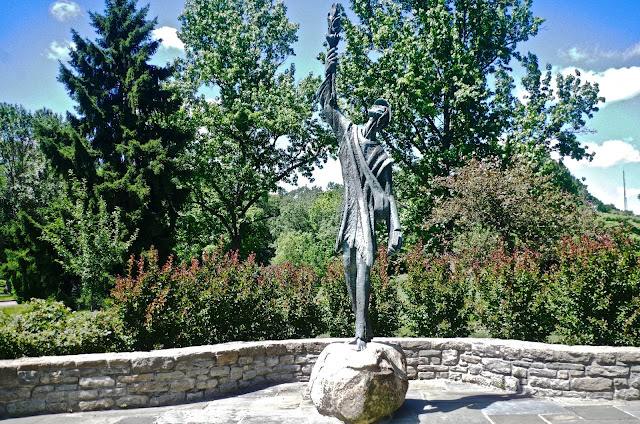 It truly was a beautiful park.  I could see why people would come here to just ride their bikes or jog or even sit and meditate and watch the swans in the ponds. 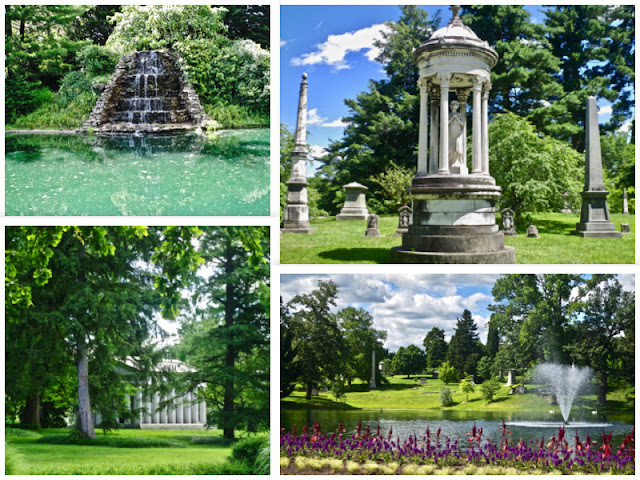 From there we headed over to the much anticipated Cincinnati Museum Center at Union Terminal, that has been turned into several museums.  However...when we got there, we were stopped in our tracks because it's under a multi-year renovation and only the Children's Museum is currently open!  ;-(   That's what we get for having an "out-dated" AAA Book!  We were sooo disappointed.  Seeing that station was something we had been looking forward to...oh well, guess we will have to come back! 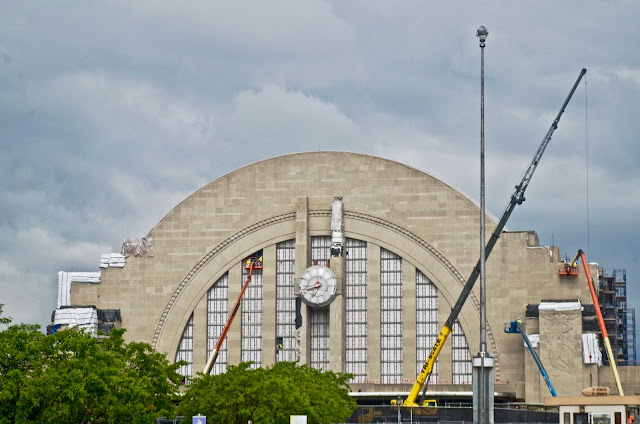 We started our next day out with a really fun outing, The American Sign Museum!  Signs are something we all see every day.  They advise us, entertain us, direct us and educate us.  I don't think we could get along without them, but we don't really think much about them, they are just there.  This museum was started by Tod Swormstedt.  He began working on it in 1999 and opened it to the public in 2005...but in truth, it's been "his baby" his whole life.  You see, he kind of grew up "with signs".  His family owns  the trade journal Signs of the Times, which has been published since 1906, which is all about (you guessed it) "signs".  After seeing so many signs wind up in the dump, Swomstedt felt it was important to save them, for history's sake, hence a museum.

Most signs and objects are donated from the sign industry with over 500 on display dating from the late 19th century to the 1970s.  The collection includes samples of gold leaf lettering on glass, a Sputnik-like plastic orb from an Anaheim shopping center and even one from Earl Schibe from Compton, complete with a bullet hole!  There's a wonderful fiberglass 1960s "Big Boy" that shows off the changes (stripped pants (vs checkered), red hair (vs brown) they are thinner now, and most of all, a three-dimensional slingshot in his back pocket!  And for us "westerners" note the sauce - it's white, that's because out here in Ohio, it's tarter sauce!  Not our "Bob's Secret Sauce" we're used to! ;-)  Kevin gave us a great tour, we could have stayed in there for hours.  Such a fun and educational place! 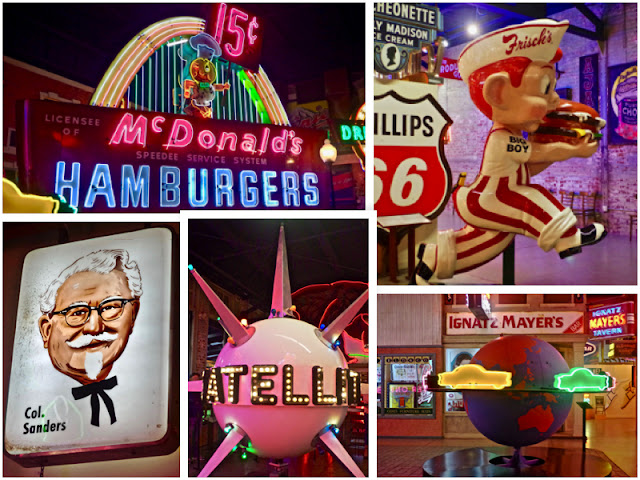 Afterward we drove over to Mt. Adams neighborhood and Eden Park.  A beautiful park and neighborhood.

Mount Adams was originally known as Mount Ida.  The namesake was from Ida Martin, a washerwoman who lived in the hollow of an old sycamore tree located on a steep hill.
In the early 1800s the steep Mount Adams hillside was largely barren as early settlers had cut down all the trees for timber to construct their homes.

In 1831, Nicholas Longworth, a wealthy attorney, purchased the mansion that is now the Taft Museum of Art and the large lot of land behind including barren Mount Adams.  He transformed the hill into a vineyard. Longworth would become the first commercially successful winemaker in the United States, and has been called the "Father of the American Wine Industry." During the 1830s and 1840s Longworth cultivated Catawba grapes, which were used in making his champagne known as Golden Wedding. The wine inspired Henry Wadsworth Longfellow to write the poem "Ode to the Catawba Wine." Contemporaries reported that Longworth's wine "transcends the Champagne of France." The wine making industry around Cincinnati grew rapidly for several decades until it was virtually destroyed by downy mildew, powdery mildew, and black rot around 1860. The American Civil War created a shortage of manpower needed for vineyard labor, and the death of Longworth in 1863 furthered the end of Cincinnati's wine industry.

Now, it is an up-scale neighborhood, not unlike parts of San Francisco with it's steep hills and small unique homes.  The park itself is large and lovely with some very old buildings. Both areas had great views of both Cincinnati and across the river to Kentucky. 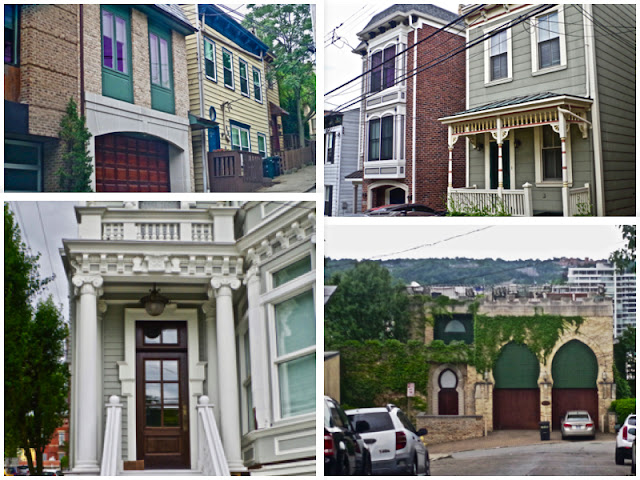 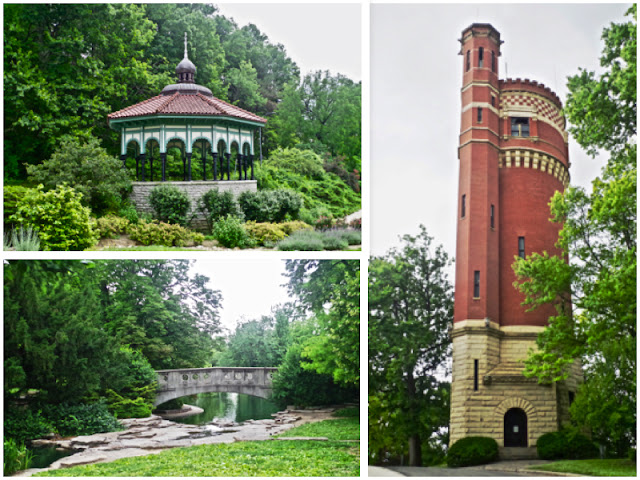 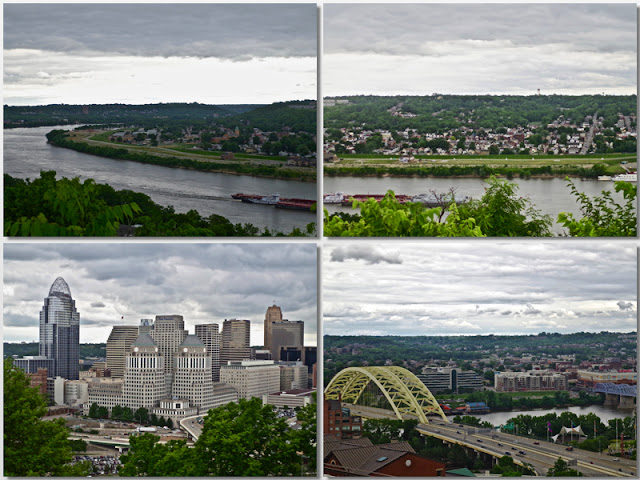 Our last visit was to the home of the 27th President, William Howard Taft.  He was born and raised in Cincinnati, as was his father and whole family. His whole family was  greatly involved with local and national politics, the law and social causes.  It was stressed to all the children from the very beginning  the importance of high standards, hard work, fair play and public service.  Scarcely a civic or cultural organization in town could not claim the participation of one or more of the Tafts.

Both Mrs. Tafts (Williams's mother and his wife) were avid journal and letter writers and noted many things about the house on Auburn Avenue, so it was easy for the Park Service to reproduce and decorate the home as it would have been when they were there.  They sold the home in 1899.  It underwent modifications with each successive owner, the last having divided the deteriorating building into apartments.  In 1969 the Federal Government designated the Taft house a national historic site, honoring the life and work of the only person to hold the offices of President and Chief Justice of the United States. 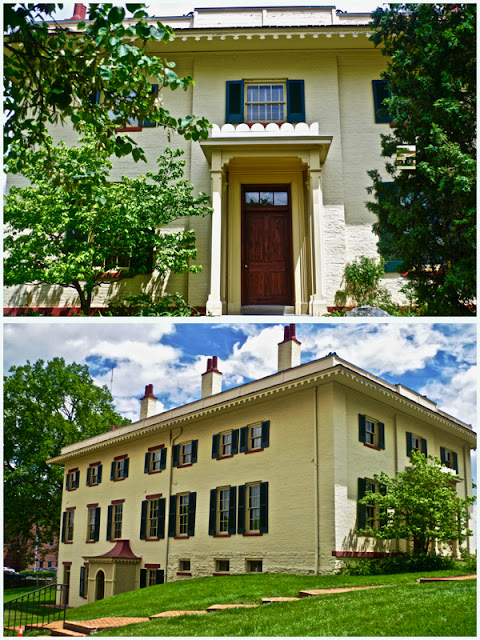 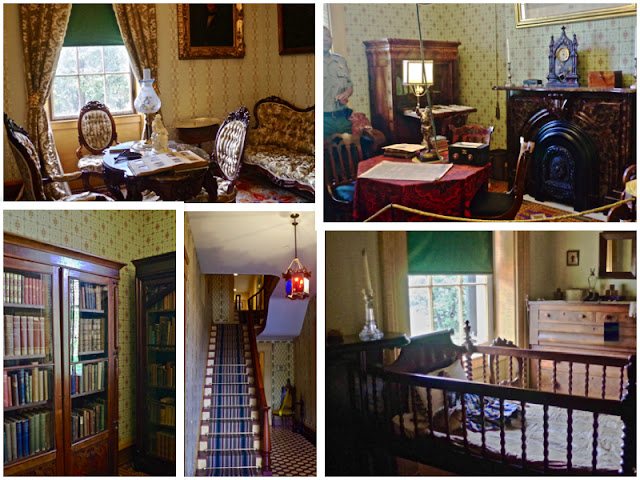 One of the things we had read about Cincinnati was that they were "famous" for their chili!  While we were there, we got to talking to several people at various locations and one thing that kept coming up, was "you've got to try our chili!"  Now, there seemed to be two places "to try it" - The original location, Camp Washington, or the newer chain one Skyline.  We went for the original, after all, if your going to try the "gastronomic specialty", go where it was invented, right?  Here's how it all began...

It seems that a guy by the name of Athanas "Tom" Kiradjieff, a Macedonian Greek immigrant who arrived in Cincinnati in 1922, after a couple of years selling hot dogs in NY, opened up a stand here with his brother.  He added a beef sauce seasoned Balkan-style, likely taking a cue from pastitsio, the Greek pasta casserole.  The Kiradjieffs began serving the sauce on spaghetti as well, and a food fad was born.  Today chili is ubiquitous around Cincinnati, and its devotees order it two-way (noodles & sauce), three-way (add cheddar cheese), four-way (add onions) or five-way (add kidney beans).

Being the foodie that I am, I had it the "five-way" of course!  Having been to Greece, I kind of knew what to expect, so wasn't to surprised (good thing).  Jack stuck with just the "two-way".  It was ok, but coming from the western part of the states, where we are used to a more robust flavor, or Hungarian style, I prefer it that way.  ;-) 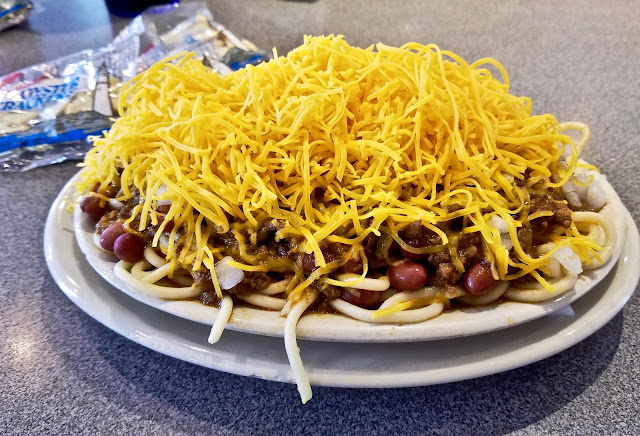 With that "under our belts", we are now off to see how Airstreams are made (just for the fun of it!) and then on to Columbus to see the State Capitol of Ohio!

...kicking back in Ohio,  Marie