Wow, did we luck out! Little did we know it, but we arrived in Lake Havasu, just in time for their annual (2nd!) Balloon Festival! Four days of hot air balloons, arts & crafts, merchandise and food booths, live entertainment and lots of fun! We chose to go on Friday, thinking that it would be less crowded than the weekend with the kids still in school. Good choice, as it turned out to the best day of the four, both weather wise and event wise! And what a GREAT DAY it was too! We could not have asked for a prettier day! We got plenty of exorcise walking from the (very far) free parking lot to the fairgrounds, then all around the many acres of grounds to work off the calories of all the fun fair food that we consumed throughout the day, that's for sure! Several balloons were offering tethered rides all day, but the "big attraction" was going to be at 4 o'clock when all the balloons (40 expected) would be showing up to do their "night glow"! That, we had to stay for! In the meantime we had fun prowling around the different booths, checking out what folks make in the lively city of Lake Havasu...jewelry mostly! Lots & lots of it, it seems! I did find one small unusual treasure to take home with me, a "fabric painting" is the best description I can give it. Instead of using paint to create a picture, the artist sewed pieces of fabric together to create the landscape. Very pretty, and different. I bought a very small one, since space is a premium in our little home. I also managed to find a hat that actually fit me! That's a hard thing for me, as it seems I have a small head (I know that hard for some to believe) and I think I look funny in most hats; but this one is kind of a fun, funky one...like me! I even got a compliment on it later! ;-)

Around 3 o'clock, we decided we better find ourselves "the perfect spot" to watch the balloon launch so scouted around and finally decided on one by a small pond. Once settled, a nice old gentleman joined us. He stayed throughout the evening, sharing his story about how he came to the city and about his family. We enjoyed chatting with 87 year old Charlie from Canada. He made the wait more interesting. Soon the drivers and their balloons began arriving and setting up and the real fun began. This is the first time I've been to one where they not only allowed you to walk around close to all of them, but encouraged you to mix and mingle with the crew, get as close as you wanted, and practically join in on the fun of setting it all up! It really added to the excitement! I snapped away. I couldn't take pictures fast enough! Soon the sun was setting and the sky was competing with the colors of the balloons! They added some skydivers, and some biplanes to the festivities just to liven things up even more! Just as the sky was getting the darkest, and the night glow of the balloons were really making their show, I was running out of battery! Yikes! I was still able to get a few final shots in, anyway. I took over a hundred pictures, so it was probably a good thing it gave out, or who knows how long I would have kept going! The good side, was that it forced me to put my camera down and just wander around and enjoy it all, and enjoy it we both really did. Good job Lake Havasu, you can be proud of yourself on this one! 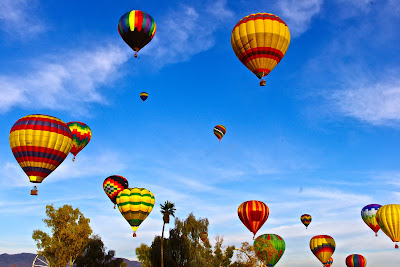 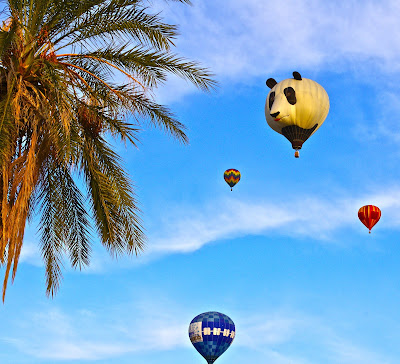 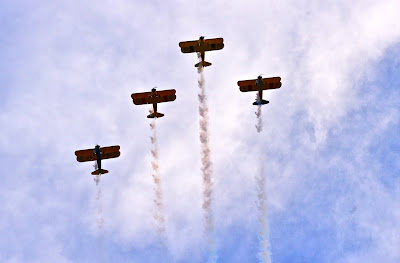 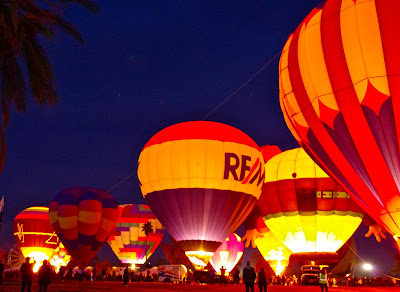 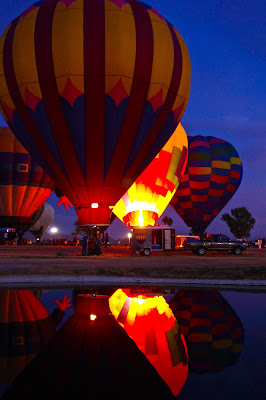 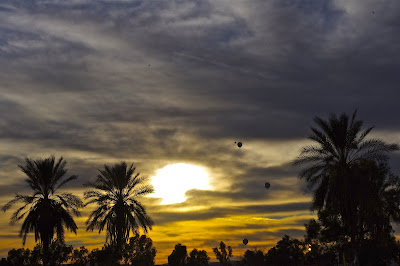