Well...as we all know, there is a reason for all the  cliche's in life...like "best laid plans", and "all good things come to an end", and "good old Murphy's Law" etc.  Well, all those applied to me just as we were heading into Canada for the highlight of our summer trip!  My trusty, favorite, best-friend, computer up and died on me...ugh.  I rushed it into the first Apple store we came to, only to be told that it was "to old" to fix any longer, and that I needed to buy a new one...and for "what I do", I needed the best (of course) and that would be a mere $3999.00!  Ouch!!!!  Noooo, I could wait until I got back to Arizona and check with my guys, who have done all the work on my baby these past few years, and just maybe they can work one more miracle.

Our first stop in our Canadian Adventure was the Capitol of Manitoba, Winnipeg. 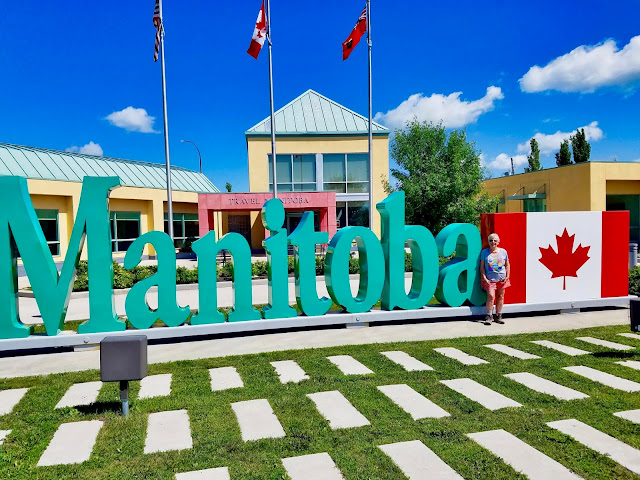 Winnipeg has over 650,000 people so is quite large, and quite diverse in land and people.  They are quite proud of the fact that they have 35 different nationalities living there. The  confluence of the Red River, which flows south to north, and the Assinboine River, whose eastward flowing waters were a main route of Western exploration, led to the founding of fur-trading post in the early 18th Century.  The fertile lands created by the rivers later drew farmers and other settlers. 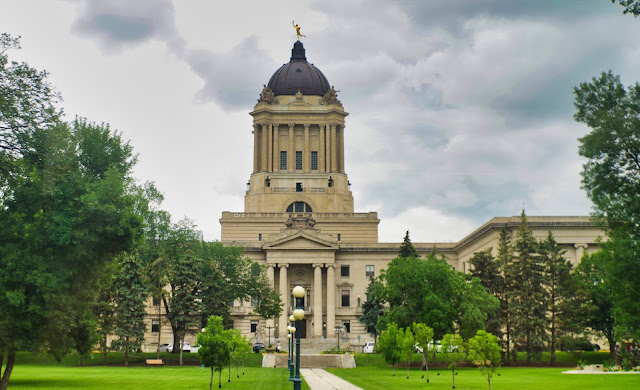 Because I was still healing from my sprained ankle, we decided the best way to "see Winnipeg" was on one of their Trolley Tours.  It was a great way to see this beautiful city, albeit frustrating in that I couldn't get out (it wasn't a hop-on-hop-off) and walk around and really enjoy the city and photography it the way I would have liked to, but better that than not at all...and having a guide with all the information is always fun and enjoyable!

Winnipeg like the city was made up of various distinct "areas"  like the French District, where French is still spoken there and all the restaurants are French; China Town; The Exchange District where the city's original warehouse district was, most of which was built in the 1880's, now are cafes & houses; The Theater District with historical buildings (the first theater built in 1901) showing live and film; along with various other neighborhoods. 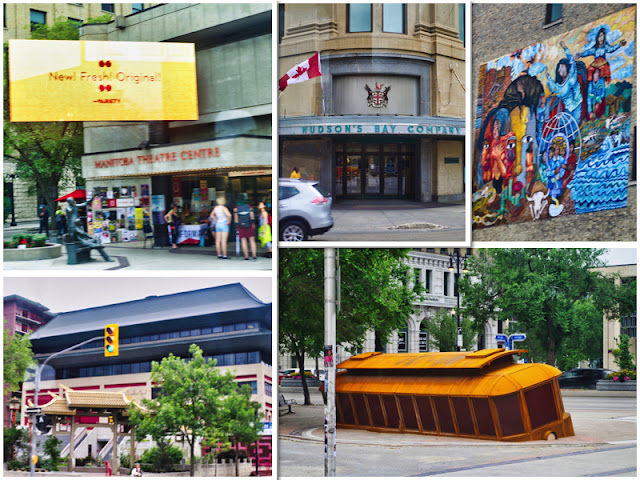 The best part of the tour was a side trip that we actually did get off of the trolley for.  It was a walk down a back alley of a local artist by the name of K. Barteski who lives and paints here.  It seems that one day a neighbor spotted her painting a polar bear on her garage door.  She asked her if she would paint hers as well.  The artist said she would, if it was an Arctic animal, otherwise, she would charge $5000!  She chose an Arctic animal.  Soon the other neighbors followed suit...and slowly the whole alley has filled in with beautiful painted garages and fences of Arctic animals.  Ms Barteski is a well know artist and philanthropist donating money, time and art to her beloved Arctic animals.  Her work is absolutely beautiful.  What a treat it was to see this back alley! 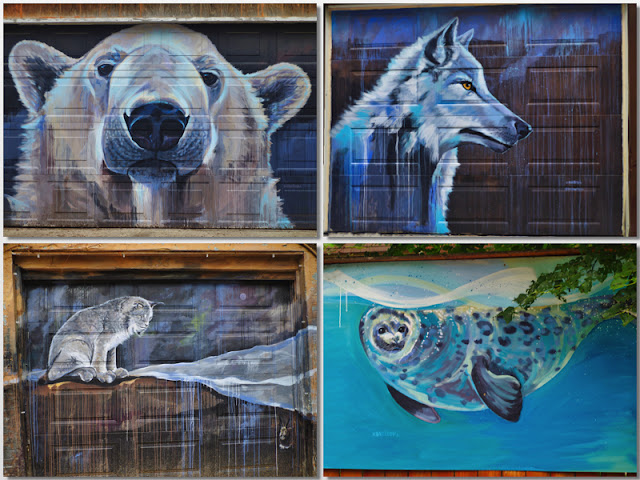 The Trolley begins and ends at a place called "The Forks" - Winnipeg's main gathering place.  The history is that at the confluence of the Red and Assinboine Rivers, a meeting place has been here for more than 6000 years, beginning with the Aboriginal peoples.  Within this area is the Forks Market - a renovated railway, cold storage warehouse with shops, boutiques and restaurants housed in a four-story building.  A fun, festive place to meet and eat...we did!  Canada has a local fish called "pickerel", that in the US is Walleye, and is a lovely, light, flaky, white fish.  They fry it in a wonderful beer batter for their "Fish N Chips" and it's so yummy!  All served up in a large paper cone. 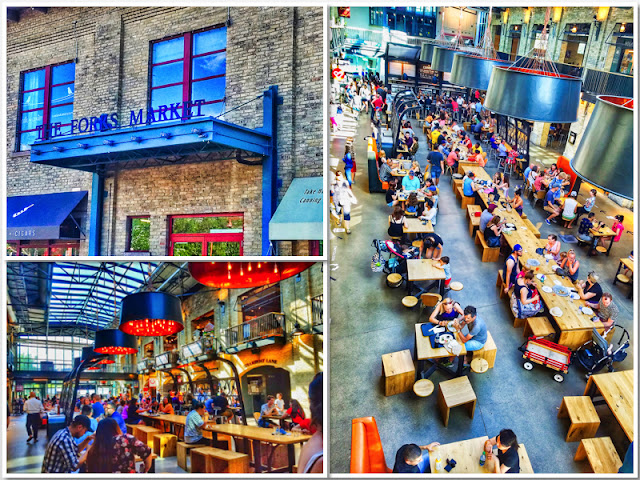 The next day we drove north to a small Provence of 5,800, called Gimli.  Established in 1875, Gimli was the site of Canada's first permanent Icelandic settlement, the largest outside of Iceland.  We visited the New Iceland Heritage Museum to learn about their incredible journey from Iceland to Canada after a volcano nearly destroyed their land.  Canada was in need of pioneers and farmers, so was advertising in Europe, offering to pay passage and land as long as they stay and work the land for at least two years.  A long treacherous trip and many hardships that so many went through...makes one sure appreciate our easy life today! 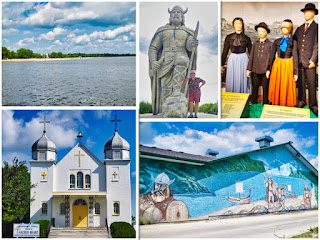 Icelanders are fishermen, and Gimli is located along Lake Winnipeg, the largest lake in Canada.  It had a nice dock, that we took a walk along it and discovered a couple of artists restoring murals that had been painted all along the side of the dock walls.  Very cool. 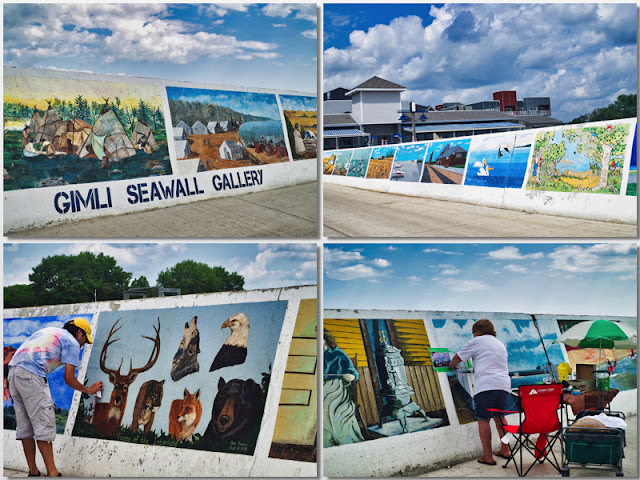 Our last visit in Winnipeg was to the Royal Canadian Mint.  This mint produces all the circulation coinage for Canada as well as coinage for more than 75 foreign countries whose flags greet you upon the driveway entry. 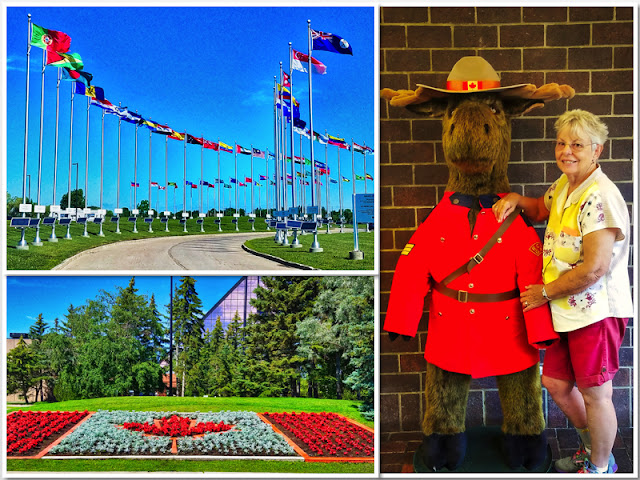 We didn't make the sold-out tour, but while they were off on their tour, we were left in the entry with the manager and two mechanics working on an old stamping machine that now is being used for souvenir coins.  We ended up chatting with them as they completed fixing the machine and got a personalized, one-on-one "tour" about the machines and how they all work.  They were all so nice, the mechanics, the manager and the guards.  We even got lift their solid gold bar, which wasn't easy - it's heavy!  I think we had more fun and learned more not going on the tour!

There was so much to see and do in Winnipeg, we could have spent a week there, but with my inability to walk much, it just to limiting.  I guess we will just have to come back again some day, eh?